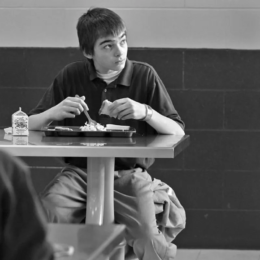 This is an attempt to understand the psychology of male wallflowers.

Human beings are social animals. Thus being unsociable or unapproachable is a vice, because it impedes well-being. But in women, we regard it as a forgivable vice. Ultimately, this attitude relates to sex. For men, sex ends in an orgasm. For women, it sometimes ends in pregnancy and childrearing. Thus it is rational for females to err on the side of caution. A woman who is too sexually forward is not really respected by men or by women. This prejudice against outgoing women, although rooted in sexual modesty, extends far beyond sex. Thus women are penalized—and penalize each other—for being too outgoing in areas of life that have nothing to do with sex. For instance, many men cringe simply when women speak loudly.

Men, however, have no excuse for being wallflowers. For men, being outgoing, forward, boisterous, and socially available are seen as good things. Again, this attitude may be rooted in sexual biology, but it extends into all areas of life. For men, even excesses in this area are regarded as forgivable. Why, then, do some men hang back?

It is tempting to just trot out the distinction between introversion and extraversion to explain this. Aren’t some people just born that way? But I know of extraverted wallflowers as well. I have also observed that male wallflowers seem more plentiful with each passing generation, which leads me to think this phenomenon is based on parenting and other environmental factors, rather than basic character types. (Assuming, of course, that introversion and extraversion are inborn rather than acquired.)

The male wallflowers I know are all highly talented people. Some have a great deal of potential, much of it unrealized, and as I argued in “On Potential,” when a guy is pushing forty, having “a lot of potential” is no longer a compliment, since by then, we expect more actual achievements. Other wallflowers I know are actually quite accomplished, but they have received nowhere near the recognition they deserve. My standard advice to wallflowers is that they need to do more. They need to accomplish more, and they need to do more to promote their accomplishments. What are you waiting for? A handsome prince? Hence the wallflower metaphor.

Whenever anyone shares a psychological theory, he is usually talking about himself, at least in part. Whatever insight I have in this matter derives from introspection. Years ago, I asked a friend and mentor to read my doctoral dissertation. When I sent it to him, though, I did not include his name in the acknowledgments. I almost typed it, but then I thought something to the effect of, “I want his honest opinion, and thanking him in advance smacks of flattery.” So I left out his name. It was, of course, the first thing he noticed, and he was deeply offended. After all, his work had profoundly influenced me. Acknowledging that was only just. But I was frankly appalled at his reaction. After all, I had the purest of motives.

Narcissism doesn’t begin to describe this phenomenon. Everybody wants recognition for his merits. That goes for people who go out and conquer it as well as for those who hang back and wait.

Insecurity doesn’t begin to describe it either. I was quite secure about the value of my work. If I doubted anything, it was the objectivity of my friend, hence the desire to abstain from anything that smacked of flattery.

The essential factor was my secret longing for the gift of recognition. But that’s not generally how the world works, especially for men. So why were my desires out of sync with reality?

There is one part of the world where one does receive recognition of one’s worth simply as a gift: the family. Parents simply give their children love, and they do so unconditionally, in advance of any actual achievements. Think of all the trouble your parents went to when you were a squalling, needy infant, incapable even of feeling gratitude, much less paying them back, even in the coin of simple manners. Parenting, at root, can’t be transactional. There’s a huge amount of investment that has to go into a child before he can give anything back. One has to prime the pump. Parenting isn’t a thankless task, but sometimes “thanks” is all you get from it.

But what happens when a child feels under-parented? What happens when he feels he wasn’t given enough? Then he goes through life looking for people to give him what his parents didn’t. In my case, my parents recognized early on that I was a very bright child and did everything to encourage me. But they didn’t really understand me, especially when I started coming home from college talking about philosophy and political theory. Once I realized that my behavior stemmed from feeling under-parented intellectually, I became much more comfortable with how the game is played. Doing good work is not enough. You need to promote yourself as well. You need to fight for recognition, not just wait for it. And to gain recognition from others, you have to give it.

Millennials and Zoomers are the children of the most self-absorbed and self-indulgent generations in American history. Is it any wonder that their sons feel under-parented, across the board? Is it any wonder, then, that a lot of them are wallflowers? Nathaniel Branden once said something to the effect that a lot of psychological hangups can be articulated as “At some stage of my life, my needs were not met, and I’m not budging one inch until they are.” The trouble is, of course, that once you are a grown man, nobody is going to give you anything. And if you are waiting for that to happen before you start your life, you will never start.

But is a grown man really going to let a needy little boy stop him from living?