An Open Letter to Black Insurrectionists 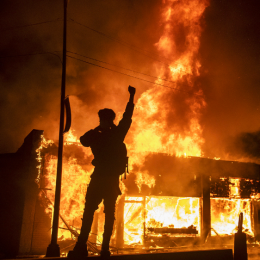 Over the last several weeks you’ve given it your best shot, and what have you accomplished? You’ve shown the world that all you can do is destroy. And yes, you may have won some tactical victories. But guess what, you’re gonna lose the war.

We’ve been told since just about forever that “black people built America.” And now in 2020 millions of people are waking up to the reality that all black people can do is destroy – destroy statues, destroy businesses, destroy lives, destroy the very history of this country. Of course, this is not so much different from the destruction you have wrought upon cities like Detroit and Baltimore and Newark and Selma for lo these many decades. But today it’s difficult for even the most deluded of White people to ignore the reality of race.

Yes, there are many black people who do not go along with the insurrection. Black church goers who refused to take a knee to the incendiaries in the streets. Black police officers who did their lawful duty even unto death while all others were fleeing for the hills. Bless ’em, one only wishes there were millions more of them. But there aren’t.

Look at the upsurge in gun sales, always an indicator of White people preparing for a fight. Look at the upsurge in net traffic for even the most obscure of nationalist websites. Look at the articles appearing in the bourgeois media which evidence a belated realization that the older mainstream ideologies are not working, and now it is time for Whites to get militant.

The recent insurrection has done more for the cause of White Nationalism than years of race realist statistics, Kekistan memes, and Neo-Confederate rallies in small Southern towns.

And yeah, I know, you in BLM have those big juicy corporate-NGO grants and jobs coming your way. But guess what? The globalists who run those corporations and NGOs see you as expendable. Consider how they have thrown the White working class under the bus in their manic quest for global dominance. Think it is going to be any different for you? Sooner or later, they’re going to tire of black criminality and black incompetence, and they’ll throw you under that same bus. If you do not believe this, then check out how the globalists are even now importing tens of millions of migrants from Third World countries into America who will be used to muscle you out.

Look at the history. In 1865 at the end of the Civil War, the Confederacy was crushed, Whites in the South lay supine, and a coalition of Northern radicals and militant blacks ruled the nation (sort of like today, yes?). Then consider that a mere 15 years later the entire regime of Reconstruction and Equality had been overthrown by the White Man’s Revolution, and a new and grandiose era of White rule commenced in America. Or consider how at about the same time small armies of White men literally conquered all of black Africa and brought the Dark Continent into the modern world. Or how in the Cold War, White-ruled Rhodesia was able to defeat any number of black insurgents until stabbed in the back by treasonous forces from abroad.

Like the Japanese at Pearl Harbor, you have awakened a sleeping giant. And we should remember the outcome of World War II in the Pacific, ending as it did with the destruction of many Japanese cities in air raids and atomic attacks – though come to think of it, it’s hard to think of how black cities could be any more devastated than they have been under both your governance and your rioting. And let us note that the Japanese rebuilt their cities into even greater wonders. Compare Hiroshima today with Detroit – another example of the interrelationship between race and civilization.

The funny thing is, none of this had to happen. Over the last 60 years White people have extended you every courtesy, have invited black people into their schools, their neighborhoods, their homes. And all you have been able to do in return is – destroy.

See you in the streets.