Lessons Nationalists Can Learn from the Hussites 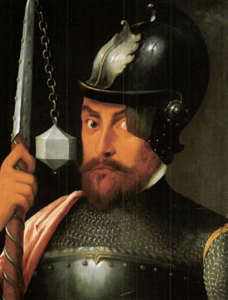 Is it possible for national patriotic revolts against the globalist elite to be successful? And if so, what is the right strategy? This is a topic with which some of the best independent minds of our time are preoccupied. We have seen a number of promising attempts. Some have ended in defeat (Trump, Strache), others are uncertain (Salvini), others have gradually changed their position (Boris Johnson). There is growing tension in many societies, but this in itself does not increase the chances for victory. There are even signs that the new aristocracy — the new upper class — is strengthening its grip on power.

I address this in my books, where I argue that the new aristocracy’s self-destructive activities must continue for several more years before the elites damage themselves to the point that change will become possible. I also argue that the question is who will then be best prepared to take advantage of the situation. At this point, it looks like the Muslim community will be in the best position for a takeover.

Those who want to prepare for the coming time of change should look to history for successful models and principles. Americans may recall the War of Independence, when the colonists of that time succeeded against the global British Empire. But I will recall an episode less well-known in Anglo-Saxon countries: that of the Bohemian Hussites.

The Hussite revolutionary movement was the first time in the history of Christian civilization that peasants were able to repeatedly defeat the best professional military forces of their time. It is not that they achieved only one surprising victory; history knows many such cases. The Czech peasants in fact won a whole series of wars against them! We cannot recreate the fifteenth century, of course, nor would we want to return to that time’s horrific level of violence and brutality practiced by all sides. But we can show a principle that perhaps applies more generally, for the Hussites adhered to a cause very similar to that of today’s patriotic populist movements.

In 1415 Jan Hus, the most popular Czech preacher and the country’s greatest moral authority, was burned at the stake in Constance. A wave of riots primarily directed against the Catholic Church followed, but the protests had a social dimension from the start, largely driven by the energy and discontent of the poor. The Hussite revolution was gradually joined by the upper classes until it gained a majority in the country.

Five crusades and a number of smaller campaigns were successively launched against the Bohemian heretics. The campaigns were fought by the best warrior professionals that Europe could muster at the time. These were armies of approximately 30,000 men, many times more than the numbers the Hussites could muster — yet all of these expeditions ended in crushing defeat. In the end, the Catholic Empire had to make peace with the heretics, including accepting universal freedom of speech as a fundamental right. The Czech lands became the freest part of Europe for 200 years. Inquisitions and burnings at the stake became a thing of the past.

Textbooks speak of the Hussite‘s religious enthusiasm and fanaticism, which is accurate. But history is full of religious zealots who were burned by the hundreds. The difference was the leadership of the brilliant warrior Jan Žižka of Trocnov, himself a military professional who became the Hussites‘ supreme military commander when he was over 60.

He solved an apparently hopeless problem. The Hussite nobility had only small numbers of troops, so on one side were mostly peasants with no training, while the other was a professional army equipped with, the most advanced technology (iron cavalry) of the time, not to mention numerical superiority.

How to deal with such a matter? The most common approach would have been to examine how the other side achieved success and emulate it. For Žižka, this would have meant emulating the Iron Knights, a mass of armored warriors capable of crushing anything in their path. Warriors in armor were worth many times a working man‘s lifetime wages. Horses were specially bred for this purpose, and the knights themselves were trained from childhood. If Žižka had gone this way, he would have put peasants on horseback, had some kind of armour made for them, and sent them to certain slaughter. They’d never be able to equal the knights‘ training or their years of experience, and their equipment could never be as good.

Žižka instead studied his enemy, which he knew well as a seasoned warrior, with a different perspective in mind. After all, they too must have had weaknesses. What were they?

The Iron Cavalry did indeed have many:

There were other problems as well. As a result, Žižka had a basis on which to design a different type of army. He chose to fight in places that had difficult terrain, or else had his engineers make the ground worse ahead of time — sometimes by digging pits, scattering iron hooks (making it difficult for horses to move), or setting other traps. His army also developed two major technical innovations: wrought-iron farm wagons that could stop armored cavalry and small firearms. The balance of power was suddenly shifted such that a village girl could knock an armored warrior who had trained all his life for battle off his horse.

Religious and nationalistic fervor also played a role, of course, but it is enough to remember that wars against heretics were then fought in an exterminationist manner. Conquered peoples were no longer enslaved, and prisoners were not taken. Heretic populations in conquered territories were seen as spreaders of the plague. Thus, every last baby was killed and burned. The defenders would therefore have been well-motivated even without these other factors. Žižka added strict discipline — often very harshly enforced – to this, as well as education. One of the participants in the Crusades, the later Pope Pius II, stated in his notes that Czech village women knew the Bible better than the bishops of Rome. Their educational superiority also applied to technology.

If we were to apply Žižka’s experience to nationalist movements today, it would be as follows.

First, it is hopeless to try to imitate the other side’s strategy. Some say that if they have succeeded in their long march through the institutions, then we have to make our own long march through the institutions. If they have liberal movie stars, we’ll make conservative movie stars. That’s basically what Andrew Breitbart and others are suggesting, but it’s never going to work. They’re better at it, they have far greater resources, and they have more experience. We can’t win in their fields using their weapons.

Second, you can’t apply the strategy of the nineteenth-century labor movement to today. We can admire those people, but follow their tactics today would amount to waging the last war.

We need a modern solution in the sense that it is completely new, and it has to be one that the other side can’t imitate. That is, their weakness derives from the way they maintains their power. Figuring out how to exploit this is going to take a lot of analytical work, including testing theories based on data: economic analysis, sociological analysis, mathematical modelling, and so on. It’s a huge learning task. It may offer some advantage that the results of most of the scientific research done in recent years is available on the internet. The hard part is finding what is important among the huge amount of ballast. The more educated part of the resistance movement has a huge job ahead of it.

If we can’t make this happen, we should also remember the second Czech experience. Towards the end of the seventeenth century, the landlords drove the Czech peasants to the brink of starvation, causing the peasants to recall their Hussite ancestors. Their clash with the regular army lasted less than an hour, and the state authorities did not even bother to pursue those peasants who survived. There was no need.