Even the Military Sees Middle Americans as Nazis 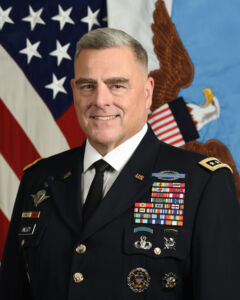 The Nazi canard is still alive and stronger than ever in the post-Trump era. Even since Donald Trump came down the escalator, his many enemies have cried that his movement is the modern-day NSDAP. Much of this owes to Americans’ only historical reference being World War II. The other factor is that there exists no greater evil to the contemporary westerner than the Nazis. Not even Satan can compare.

While most of the Nazi comparisons were relegated to excitable talking heads and Resistance Twitter accounts, a number of serious people bought into this idea and definitely declared Trump and his movement “fascist.”

One of those serious people is Chairman of the Joint Chiefs of Staff, Gen. Mark Milley. According to a new book written by Washington Post reporters Carole Leonning and Philip Rucker, Milley said Trump “preached the gospel of the Führer” and saw his supporters protesting the election as “Brownshirts in the streets.” He argued the post-election situation as a “Reichstag moment” and believed Trump was stoking an insurrection. When discussing security plans to protect the Capitol from imaginary threats following January 6, he said this of Trump supporters: “These guys are Nazis, they’re boogaloo boys, they’re Proud Boys. These are the same people we fought in World War II.”

That’s quite a statement from our nation’s highest-ranking military officer. This is a man who helms the most powerful military in the world, and he relishes the thought of unleashing it upon American citizens. The MAGA-hat wearing boomers are Nazis in Milley’s eyes — and they deserve the same fate as the Krauts in World War II. This isn’t just some Resistance clickbaiter; this is someone with the power of life and death. Mark Milley talks to the president and can impact policy.

The president of the United States shares a similar view of Trump supporters, but he doesn’t call them Nazis. Rather, he sees them as Confederates. In a speech last week on voting rights, he argued Republican election reforms present “the most significant test of our democracy since the Civil War.” He even argued Trump supporters touring the Capitol without permission is worse than anything the Confederates ever did. “The Confederates, back then, never breached the Capitol as insurrectionists did on January the 6th,” he told reporters. “I’m not saying this to alarm you; I’m saying this because you should be alarmed.”

Biden seems awfully obsessed with Civil War allusions. In a June speech, he mocked gun owners for thinking they have what it takes to fight back against government tyranny. “If you wanted or if you think you need to have weapons to take on the government, you need F-15s and maybe some nuclear weapons,” he joked. The implication is that Biden would consider the nuking his own people if they rebelled. What a lovely idea.

Public commentators are more eager than before to declare the Trump movement as fascism. The Atlantic’s David Frum, a neocon, asserted this claim just a day before Milley’s comments were revealed. He claims he previously argued against calling Trumpism the “f-word” because it lacked key essentials to fascism. Namely, the cult of violence and contempt for legality. But Frum now claims Trumpism embodies these two factors after January 6. “Trump’s no Hitler, obviously. But they share some ways of thinking. The past never repeats itself. But it offers warnings. It’s time to start using the F-word again, not to defame — but to diagnose,” he concludes.

This isn’t serious analysis. Whatever Trumpism is, it’s not fascism — even by the dubious standards Frum sets. One protest that got out of hand is hardly a cult of violence. Challenging the election through the courts does not display a contempt for legality. The election itself, with the new revelations from Arizona and Georgia, shows a greater contempt for legality than anything Trump has said. But legality, or more importantly the pretense of legality, is determined by those who wield power. Those people are not Trump supporters. The contempt for legality really just means disrespect for the elites, the people that Frum serves as a mouthpiece for. You have to listen to what Gen. Milley, the CIA, the FBI, and the DOJ tell you. Only a fascist would doubt their wisdom.

The military leadership’s hatred for the average Trump supporter should disabuse the Right of some of its adoration for men in uniforms. These generals would gladly order their troops to shoot you for being a “racist.” They have no loyalty for the American people or its heritage. Milley supported the elimination of Confederate honors from military bases and vociferously defends Critical Race Theory. On the latter point, he says the military needs to learn it to understand “white rage.” Their primary loyalty is to the Empire of Nothing. It pays them well and offers them high status for subservience. They recognize no America outside of it. America is just an idea that mandates racial equity and gay pride parades. That’s the America Milley and the generals salute.

As an epithet, Nazi is grossly overused in our present age. But unlike other tired smears, it still carries meaning. Being called a Nazi marks you as a state enemy and the worst villain in society. The state feels justified in using violence against you if they can claim they fought against your kind in World War II. That’s all it takes.

The use of the phrase fascist or Nazi carries a more sinister meaning now. It no longer simply makes you a social pariah — it also casts you outside the body politic. Nazis are, apparently, an ever-present threat to the polis and they must be wiped out. In the past, Nazis would be granted a degree of peace in the country, no matter how extreme they were. They could march in brownshirt attire through Jewish neighborhoods with police protection. They were of course not liked by society, but military leaders didn’t summon the nation’s firepower against them. They were allowed to exist as a kooky fringe. Few outside the money-grubbers at the SPLC saw them as a threat to America.

That’s changed. Every society needs its demons — Nazis are ours. Just as reformation-era villagers demanded witch burnings, dramatic action is called for against our devils. The globalists want everyone to believe that racists are the number one threat to our society. As long as people respect the uniform, they will at least listen to the uniform’s argument.

It’s not a joyous thought to be part of the most hated class in American society. But there is an upside. It’s not just limited to “racists” and “white nationalists.” The Nazi label encompasses the entire base of Trump supporters. It doesn’t matter how much you deplore racism or Hitler — the Chair of the Joint Chiefs of Staff says you’re a Nazi. There’s an opportunity here. Persecution breeds contempt for the system, and the more hateful the system gets, the more its targets begin to question what they’re told. They may begin to wonder what these “Nazis” they’re lumped in with actually believe. They may discover they’re not Nazis at all, but people with common sense observations and solutions to the world around them. They may even see them as true patriots.

The only thing the Dissident Right has to do is not to satisfy the system’s Nazi fantasy. Persecuted villagers didn’t proudly declare themselves possessed by the devil. We shouldn’t play to type either. There’s nothing Gen. Milley would like more than to mow down actual brownshirts.

» Toward A New Era of Nation-States, Part VII: The Will to Power & Unbridled Egoism, Part 1