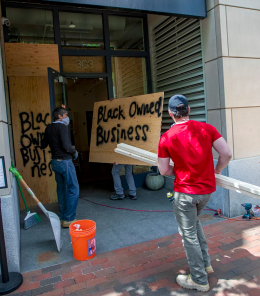 America Braces for Mass Insomnia as Floyd Trial Wraps Up

As the Trial of the Century winds down in Ol’ Minneapolis Way, news outlets are prognosticating a vicious wave of “unrest” all across the country.

In Philadelphia — which had nothing to do with George Floyd’s death — businesses are said to be preparing for “social unrest” in a city that already suffers from a lack of healthy REM sleep.

The Washington Post sternly warns us that the current “unrest” in Brooklyn Center, Minnesota over the shooting of a mulatto with outstanding warrants, previous armed-robbery charges, and a fat, ugly white mother should serve to scare the shit out of other suburbanites.

Unrest is spreading all over the country just like it did last year when the weather started getting warm, and Americans are taking out their sleeplessness by bashing and smashing and burning and chanting dumb slogans again.

Never mind the fact that there wouldn’t be all this unrest if these clowns didn’t stop resisting arrest.

Just take a 10 mg chewable cherry melatonin tablet like I do every night. Works like a charm.

In the ridiculously murderous city of Chicago — where two people got murdered a day last year but no one makes a stink about it unless it’s a white cop shooting a poor, defenseless, homicidal POC — downtown businesses are boarding up and “expecting unrest” after authorities finally released video from late March of an adorable Hispanic child with a Moe Howard haircut named Adam Toledo being ruthlessly slain in cold blood by a melanin-deficient policeman who probably called him a “spic” and a “beaner” as he was pulling the trigger on the gun he uses to compensate for his sexual inadequacies.

Yes, Young Master Toledo was but a wee brown saplin’ of only 13 years. But even his own mamacita admitted he’d gone missing for several days in late March, returning home on the 28th for a few nibbles on a chalupa before heading out once again into his barrio called Little Village in Chicago, a nest of the notorious Latin Kings street gang, the largest Hispanic street gang in the country and an ethnonationalist criminal syndicate whose membership in Chi-town alone numbers anywhere from 25,000 to 35,000. It’s also a known fact that the Latin Kings recruit members when they are still children.

Police have not confirmed whether Toledo was a member of the Latin Kings, but several fact-pellets have rained down from the heavens that suggest he was much more malo than the media is spinning it. For starters, several Hispano-tweeters mourned his death by referring to him as “Lil Homicide” and “Bvby Diablo.”

Then, there’s the extremely uncomfortable fact that this little Spanish angel was in a Chicago alleyway sometime around 3:00 AM, and police were responding to a report of gunshots fired in the area.

After that, there’s the narrative-destroying fact that the video released last week clearly shows Toledo holding a gun and running from police as they shouted for him to stop. The video also shows that he “dropped or tossed the weapon away less than a second before the officer pulled the trigger.”

Less than a second.

Think about this for a moment — the people who’ve been tearing the shit out of the country in massive deliberate temper tantrums since last May over shootings that did not directly affect them in the heat of the moment — actually, they didn’t directly affect them at all — are condemning a cop who was responding to a report of shots fired, then chased a kid with a gun for 19 seconds, and then pulled the trigger less than a second after the kid tossed the gun to the ground and held up his hands.

Not one among thousands of these rioting maroons could have handled that situation. Judging from their temperament as has been on ample display in cities across America, they would have blasted this kid’s head off while sitting in their squad cars, then gone out to get a bag full of White Castle hamburgers.

Speaking of shooting someone dead while sitting in your squad car, that’s what Somalian cop Mohamed Noor did to a blonde white woman named Justine Damond in Minneapolis in 2017. Damond had called the police after she heard a woman screaming in her alleyway and was only going out to greet the police. No resisting arrest, no running down the alley with a gun in her hand, and, most importantly, no subsequent months-long “unrest.”

While we’re on the subject of white women being shot dead by cops without white riots, Ashli Babbitt — who was stupidly, let’s face it, trying to crawl through a smashed-in window during the Capitol, uh, “incident” on January 6 — was slain with one bullet. But her name will never achieve the Q Score of George Floyd or Adam Toledo or Mike Brown because she’s an inconvenient victim.

Due to the fact that he was a Capitol Policeman and subject to federal rather than local laws, her killer’s name will never be released to the public. We’ll never see his anguished mugshot. Actually, there never was a mugshot because he was never arrested for shooting her — and never will be.

Last week, the Department of Justice issued a press release about the shooting that managed to squeeze seven instances of the word “mob” in one sentence. When white people gather together to smash things, they are an insurrectionist “mob” rather than “mostly peaceful protesters.” The feds also announced that after prosecutors reviewed the evidence, they found no reason to charge the cop who shot a small woman in cold blood.

Last week, I covered the story of the Asian guy who attacked an Asian woman thinking she was white, and this week brings the ghastly tale of a 23-year-old black woman named Yasmine Beasley who is being charged for assault after an incident on a bus in LA’s Eagle Rock section. According to witnesses, Beasley grabbed the 70-year-old woman, called her “an anti-Chinese slur,” and beat her so badly that she “suffered a concussion, a broken nose, swollen eyes and had her hair pulled out.”

Problem was, her victim was Mexican.

Everyone knows that video cameras are racist against black people. In the gigantic and oppressively humid city of Houston, Texas — which a 2019 report named the most diverse city in America — two fat black women who were even fat for black women (and four out of five black women are overweight or obese) were filmed by store cameras angrily waddling toward a female Asian store owner named Jung Kim, with one of them beating Kim to the floor and breaking her nose while screaming anti-Asian slurs at her. Keaundra Young is now facing a hate-crime enhancement on top of a misdemeanor assault charge, as well as an aggravated assault charge for allegedly attempting to run over Kim’s relative outside the store. To her credit, the other fat black woman, Dequiesha Williams, appears to have attempted to pull Young off of Kim, but as I’ve already implied, it’d be hard for anyone except an Eastern European weightlifter to budge a black woman of such size even an inch.

But despite the rampant evidence that blacks are out on the streets goin’ buck-wild against Asians, most mainstream accounts of such stories — even the ones bold enough to identify the perps as black — go out of their way to link this “disturbing new rise in anti-Asian violence” to Donald Trump’s habit of referring to COVID-19 as the “China virus.” When asked what he meant, Trump simply said that the virus came from China. I don’t recall him ever saying, “Hey, black people — since this virus came from China, I want you to take to the streets and bludgeon every nip, slope, gook, and chink that you see.”

And when’s the last time you heard a black person besides Ben Carson take orders from Donald Trump, anyway?

You know what was fantastic about the world 100 years ago? When the “Spanish flu” killed 50 million people, no one called the flu’s nickname racist, because the concept of “racism” didn’t even exist yet.