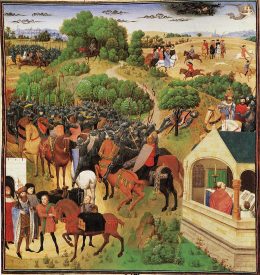 Simon Marmion, The Eight Phases of the Song of Roland, ca. 15th century.

I sold my car before moving to Europe a few years ago. I had this car for several years and took it on various road trips across the US. During a few of these trips, I thought about The Song of Roland, the French poem from the 11th century. From tales of tragedy to stories of heroism, this epic poem has given me a lot to think about during the various road trips of my life.

I first discovered The Song of Roland in my college library. The main inspiration for the poem was the Battle of Roncevaux Pass, where Charlemagne’s army was ambushed by Basque soldiers in 778. One of the individuals killed during the battle was a Frankish commander named Roland. Although little is known about the real-life Roland, numerous tales and songs were written about him over the following centuries. As with most tales that become myths and folklore, the legends of Roland took on a life of their own.

Roland became a courageous hero, and his soldiers became brave paladins. Roland even acquired magical items, such as the Durandal sword and the Oliphant horn. The Basque soldiers were replaced with Saracen Muslims. These tales were performed throughout France and became the earliest examples of the chansons de geste (songs of heroic deeds). The songs about Roland were eventually compiled into one large poem by an unknown poet between 1040 and 1115. This poem would become The Song of Roland. Although I enjoyed reading it during my spare time in college, it was only during some road trips that I would appreciate the themes of this epic poem.

After graduating from college, I was waiting for a visa to work and study in Europe. During this time, I took a job in Alaska. I quickly realized that Alaska was not the best fit for me. I made the decision to leave Alaska and drive to Seattle by myself. It took four days to drive through Alaska, the Yukon, and British Columbia. Each day, I admired the snow-covered forests and mountains while listening to Immortal’s At the Heart of Winter. Driving through each mountain pass reminded me of The Song of Roland.

The poem starts with Charlemagne’s army fighting the Muslims throughout Spain. One of the last Muslim strongholds is Zaragoza, ruled by King Marsile. Marsile offers surrender if Charlemagne takes his army across the Pyrenees back to France. Since Charlemagne and his army have been fighting for several years, Charlemagne accepts the offer. Roland nominates Ganelon to send the message to Marsile. Ganelon hates Roland and resents being sent as a messenger. When Ganelon meets with Marsile, Ganelon suggests that the Muslims should attack the rear of Charlemagne’s army as they cross the mountain pass. While I was not expecting Saracen Muslims to ambush me, I made sure that I had enough fuel and supplies as I crossed the mountain paths of the Yukon and British Columbia.

When my student visa in Europe expired, I got a job in Seattle. After being at the company for a while, I was offered a managerial position with the company in Texas. Since I did not have any friends in Seattle, I took the offer and drove to Texas with my dog. This road trip took around four days. I listened to various albums by Absurd, Nachtfalke, and Odal. Although the music was similar, the scenery during this road trip was completely different. Instead of winter forests and snowy mountains, I drove through endless deserts and barren landscapes. I almost got a heart attack when a wild boar jumped out on the road in front of me. With my heartbeat racing after slamming on the brakes, I thought about how Roland must have felt when he was ambushed.

Following Ganelon’s advice, the Muslims ambushed the rear of Charlemagne’s army and surround Roland and his paladins. Oliver, the wisest of the paladins, begs Roland to blow the Oliphant horn so they can retreat and get help. Roland refuses to blow the horn out of pride and rallies his paladins to fight the Muslims. Roland and his paladins fight with bravery and courage, but slowly become overwhelmed. Archbishop Turpin warns that if they do not retreat or call for backup, they will soon be defeated and killed. As more of Roland’s paladins are killed, Roland realizes that his mistake may have cost him and his army their lives.

I felt like Roland after moving to Texas because the job I was promoted to did not work out. Nevertheless, I made the most of the situation by getting involved in the heavy metal community. I spent my weekends driving to concerts, recording music, and hanging out with friends. I even adopted another rescue dog. I eventually got another job offer in Boston, so I took my two dogs and drove from Texas to Boston. I drove in the fall and got to see the autumn landscapes of the East Coast while listening to Temnozor’s Folkstorm of the Azure Nights.

While living and working in Boston, I got into a serious relationship with a woman from California. We took weekend trips together to Maine, Vermont, and New Hampshire. Although she was not into heavy metal, we took turns picking the music during our road trips. I introduced her to all the classic metal bands I listened to as a kid. She enjoyed some of the songs, particularly Iron Maiden’s “Wasted Years.” I was not a big fan of her music, but I did enjoy Ray LaMontagne’s “Beg, Steal, or Borrow.” When her job ended, she asked me if I wanted to move with her to California. Since I thought I was going to spend the rest of my life with her, we took the dogs and embarked on a road trip from Boston to California. Like Roland, I put myself in a difficult situation.

They say that you can never really know a person until you live with them and travel with them. In my case, I really got to know my girlfriend on a 10-day road trip. We spent most of the time arguing and getting on each other’s nerves. We both said things out of anger and frustration that we should never have said to each other. Looking back, I wish I had spent more time on the trip listening to music, appreciating the scenery, and enjoying my time with her. As the song from Cinderella explains, “you don’t know what you got until it’s gone.” Unfortunately, we did not listen to that song during the trip.

While we lived together for the next year, our careers took us on different paths in life. She got a job in Texas and I got a job in Oklahoma. I drove down to see her when I had the time, but I also started taking long road trips to attend some of Donald Trump’s campaign rallies in the Midwest. I invited her to come with me to these rallies, but she was not interested. We eventually broke up and went our separate ways. I often wished that things worked out between us. Yet just like Roland, I had to accept my destiny and fate.

After my contract job ended, I decided to head back to Europe. I decided to make one last road trip to Texas to sell my car. As I was cleaning out the car, I found a CD playlist that my ex-girlfriend had made for us on our last road trip together. Thanks to her, I was able to listen to these songs one more time. On my last road trip, I rocked out to Hank Williams III’s “Rebel Within,” Guns N’ Roses “One in a Million,” and Grim Reaper’s “See You in Hell.” I even listened to “Beg, Steal, or Borrow.”

During each road trip across the US, I kept thinking about Roland’s decision not to call for help and retreat. On the one hand, his ego and pride cost the lives of his soldiers and his friends. On the other hand, his decision to sacrifice the lives of his paladins and himself allowed the rest of Charlemagne’s army to defeat the Muslim attackers. While I can understand both perspectives, I think that Roland was reckless for risking the lives of his friends and soldiers. If Roland wanted to be a martyr, he should have first given his soldiers the option to either retreat or fight.

The Song of Roland has survived throughout the ages by various musicians, poets, and translators who felt that the story of his bravery and sacrifice were worth remembering. While I appreciate their effort in keeping his story alive, I would not want another person deciding my fate for me. Only I can determine the proper cause worth dying for. Only I can choose the path and road to take in life. Although The Song of Roland is a romanticized account of the Battle of Roncevaux Pass, I am thankful for all the brave heroes that have protected Europe from non-white invaders. Despite my criticism, I wish our modern leaders and politicians were more like Roland.

I got rid of my car three years ago, but I still take the time to enjoy the scenery and think about The Song of Roland whenever I am on a bus or train. While I may have taken a few detours, I greatly appreciate all the adventures that have gotten me on my current path in life. Being in the Dissident Right is like a road trip. Each person has their own route, playlist, and number of passengers, but we are all headed towards the same destination to secure the existence of our people and a future for white children. So whether you are driving with friends, a woman, or by yourself, be sure to put on your favorite album, appreciate the scenery, and enjoy the ride.

As a wanderer and a dissident, I hope that future generations will listen to the road songs of our heroic deeds.

» The Greatest Jewish Joke Ever Told