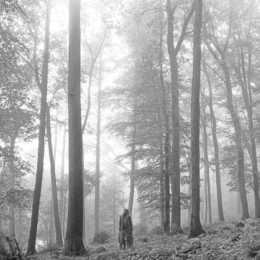 Author’s note: Tomorrow marks one year of my writing for Counter-Currents.

Folklore is Taylor Swift’s eighth studio album. It joined the hallowed halls of other so-called “isolation records” on July 24, 2020, in a surprise release that has begun to mark the production of America’s pop stars during this absurd period of COVID-19 restrictions. Swift described the album as arising from her “stream of consciousness,” allowing her “imagination” to take charge of her writing process. (I’m not sure how else music is written, but I digress.) Folklore, therefore, is tinged with a certain kind of self-importance and pseudo-confessional quality, an album put together during a time of great reflection that should have some kind of underlying weight and maturity to it.

Folklore’s reception was generally very positive, earning 4 stars from NME, 4.5 from Rolling Stone, an A- from Consequence of Sound, and 3.26 from the notoriously picky users of Rate Your Music.

Folklore taps into an aesthetic that has rather unfortunately been called “cottagecore,” a safe place for young women with all their feminist inclinations to indulge in fantasies about some kind of self-affirming agrarianism — a “reclaiming” of rural spaces from traditional social mores, remade into a queer haven. These fads, Swift’s album a part of it, are indicative of a troubling trend in pop culture. Those who make tastes know the tide of populism and anti-modernism is strong among the youth, a natural consequence of their lives generally being terrible. The appeal of a pseudo-traditional aesthetic — one defanged of any profound social critiques, leaving room for all manners of liberal contradictions — is understandable, but perverse in its implications. Dr. Kevin MacDonald called the album implicitly white. He’s not entirely wrong, but that just makes the whole thing even worse; one would think that whites would have better things to indulge in in the mainstream than nods at lesbianism set in small-town America, but we’re apparently so far gone as a society that this isn’t the case.

Swift’s “reinvention” into the patron saint of this pressure-valve aesthetic came in the form of pillaging the playbook of mid-to-late 2010s indie pop music, with the female-forward likes of Warpaint and Dirty Projectors coming through alongside the atmospherics of groups like Animal Collective. There is nothing actually new or interesting on this record; its sonic “consistency” is achieved by the repeated use of the same stale drum sounds and patterns (including an obligatory trap-influenced beat) and the same stale pseudo-metaphorical prose of Swift. Had this album come out in 2017 under any other name than Taylor Swift, it would have enjoyed a moment on alternative radio formats for a solid year, then totally vanished from the spotlight. Like all pop music, one can immediately discern Swift’s antecedents and note that she somehow managed to do the same things in a far less compelling way.

Melodically speaking, Swift’s voice frequently makes use of the same tired tropes of the last decade disguised in tenderness. More than once, Swift whoops her words, falls into an almost-rap cadence, and her piano compositions rely more on the notion that they’re quaint than being actually quaint.

In typical fashion for her, her lyrics dwell upon a comfortable brand of white feminism that simultaneously seeks empowerment while decrying her own victimization. Consider “The Last Great American Dynasty” alongside “Illicit Affair” or “Mad Woman.” All at the same time, Swift paints a picture of a woman victimized, whether it is in her own hilariously hubristic self-comparisons to Rebekah Harkness of Standard Oil fame or in the anger directed at a man with whom a female narrator is having an affair with. Subjects like these are ideally handled with grace, or at least with personal experience tempered by reflection; of course, Swift is a famous woman, so none of these things are in order. It is enough for her simply to cry about it, yet pretend that she has risen above the whole ordeal.

Swift is attempting to call upon a maturity within her that simply does not exist, relying instead upon her tenure in the pop music industry and her lip service paid to orthodox talking points to convince us that we should listen to what she has to say. Swift’s songwriting style is consistently marked by a lamentation of imagined abuses committed against her and her subsequent personal growth, which would be fine if it happened once, but it becomes far less convincing and appealing when it is repeated across several albums. One has to ask if Swift is worth paying any attention to if she continues to make the same mistakes with men and her identity. Knowing what we know, however, it makes perfect sense that perpetual victimhood is a guaranteed formula for success in the pop music world.

Grating, too, is Swift’s awful bastardization of the concept of a folk melody. The closest we get to anything resembling the musical traditions of old America are her lukewarm descriptions of Pennsylvania, a land coated in a saccharine mockery of Americana and feel-goodness that seem at odds with Swift’s own cosmopolitanism. One might wonder if this is some kind of attempt at reconciling her seemingly idyllic childhood with her ideas now, but tracks like “Seven” and “Betty” — one of 3 tracks devoted to a running theme of a sexually-confused teenage love triangle — use the warmth of old America as a springboard for brain poison about queerness and the heavy burden of adulthood.

The only “folklore” to be had on Folklore is the weaving of relatively recent developments in bluegrass-influenced pop music with the invented history of deracinated white people desperate for a struggle of some kind. Swift and her fanbase don’t have much to complain about, so something has to be made up — the folk legends of Swift’s time have become disgraced heiresses blowing their fortune on dance studios and genderbent, politically correct teenage love sagas. Of course, these things are all going to be praised as brave and risky on the part of Swift, precisely because these things have no real artistic merit beyond their status as pseudo-taboos meant to be broken in performative displays of wokeness. Does Swift really have any recollection of a childhood friend that fits perfectly into place with today’s insanity about gender, or is such a thing an obvious invention? I think we know the answer.

It’s notable that Swift elected to set much of this album in rural Pennsylvania where she grew up. The decision makes sense on a surface level, since this album’s mood is ostensibly influenced by nature and closeness to the Earth and spirituality. Dig deeper, though, and one can discern an ugly ingratefulness in the album’s themes and narratives. Swift’s home was built by men who feared God, raised families, and handed the paradise down to their children. In return, the liberated Swift has decided she has no use for these people — the idyllic Pennsylvania of her youth is better populated by more modern types, the children who seek to do nothing that their ancestors did, yet claim the land they cultivated as their own. It is the ultimate form of entitlement.

Much of this album is plainly forgettable — specifically, the tracks that do not grab one’s attention with their obvious cultural messaging. Opening track “The 1” sets the sonic mood for the entire album, with few diversions; those that come are typically in the form of an absent rhythm section. “August,” also part of the love triangle suite, is notable only for the curious inclusion of what sounds like a fuzz bass. “This is Me Trying” trots out the same drum sounds as every other track. If one isn’t paying attention to the tracklist, it is easy to mistakenly believe the whole record is an indistinguishable blob. The ordeal drags on for quite some time, too; Folklore clocks in at a hefty 1 hour, 3 minutes.

I’m not particularly upset about this record’s inherent mediocrity. I am more upset that this is what is being sold to white youth, hailed as the cream of the crop of music. It would be one thing if a pop album were chock-full of filler, but when the same filler is called an artistic masterwork, it quickly changes from forgettable to aggravating. Folklore is the spontaneous assemblage of anything good in white music from the last decade into the safest possible package, almost as if a neural network were handed Stuff White People Like and then told to write an album based on it.

There is no longer a cutting edge in American popular music, but the little effort that is granted towards the sorry institution is usually found in the dark corners of hip-hop and its various offshoots. Folklore is insulting because it is a blatant example of just how little energy actually needs to be expended in order to sate a horde of brainless white consumers. Combine Swift’s tepid feminism with the leftovers of last decade’s era of interesting music, and we get a record that appeals to as many as people as possible while saying absolutely nothing at all. Folklore tells no tales of a folk, nor does it tell a tale of any kind; the characters and themes present in this record are inventions, one-dimensional portrayals of the ideals, grievances, and romanticizations of a person who has no ties to the land but those which either make her money or famous. This is the music of a dying people relishing in the idea that they’re pissing off their parents in the process.

It is humiliatingly clear that the white-appealing music of the day is composed of scraps taken from the recycling bin of cultural fads, more talented musicians, and production methods perfected in the 1990s. If that is the case, then we ought to consign these albums back to the very same place that they came from: the trash.