If Whiteness is Sick, What is the Cure? 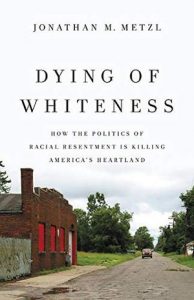 The most impressive thing about this strange little book is its merchandising. That includes its provocative, in-your-face title as well as its promotional blurbs and media spin.

In late April, some American Identity Movement members did a flash-protest at a Dying of Whiteness book-reading in DC. The Washington Post followed up a day or two later with a deliciously mad opinion column under Jonathan Metzl’s byline, blaming Donald Trump for the protest. I don’t know if he wrote it; it shows a copywriter’s fine hand, and is stuffed with talking-points from the Media Matters phrasebook.

For too long, many white Americans have avoided this conversation, and we’ve done so for a reason: We don’t have to see the color white . . .

Trump did not invent insecure whiteness. He is only a skilled manipulator of the fear at its heart…

White Americans are literally dying from Trump’s brand of identity politics. But if whiteness is sick, what is the cure?

What is the cure, indeed? Jonathan Metzl is the director of a public-health research center at Vanderbilt University, and he supposedly began this book some years ago as an oral-history project about sick people. He surely cannot have expected that it would someday be published with a shock-value title, or that it would be sold to the public as an incendiary political tract.

But here we are in 2019, and anti-Trump is what sells. So now the author goes around to the news-chat programs and fulminates against President Trump and the people who put him in office. Metzl caricatures these voters as “white working class” folk who are very stupid, very ill, and very racist.

Dying of Whiteness is not really about Donald Trump or the people who voted for him. That’s just the publisher’s sizzle, because this steak is pretty tough. You get a collation of epidemiological tables and graphs; long speculations about Americans’ “gun culture” and its history, and why young men are shooting themselves; dismal encounters with sick and dying people from the lower depths, some Travels with Charley-style travelogue; and a long, digressive section about Sam Brownback of Kansas, whom the author does not like at all.

Metzl has one central idea: Right-wing Americans are why we can’t have nice social services and healthcare reform. This is because the gun-obsessed, low-information white people think that public-health and social programs mostly benefit poor blacks and other non-whites, and so they vote against those programs. (Incidentally, these people are very unhealthy, so if they get sick, they brought it on themselves.)

It all sounds reasonable enough. After all, isn’t it a commonplace truism that government social programs are mainly for a) “minorities” and b) the elderly? Metzl himself actually admits there’s some truth to this idea. At one point he shows us a hypothetical projection of how much extra longevity Tennessee oldsters would have had if the state had expanded Medicaid under ACA in 2010. And it turns out that blacks in Tennessee would get almost three times as much benefit as the whites. (Actually, the hypothetical gain in longevity is so negligible – 37 more days for blacks, 14 for whites – it seems Tennessee was right not to expand.)

What is peculiar and unreasonable is that Metzl faults people for voting for their interests. He seems to think this is wrong, white people being “racist.” He has his priorities skewed. If healthcare reform is truly his aim, but people keep voting against it, he should figure out what’s wrong with the program. Don’t blame the customer because you have a crummy product. Don’t throw a tantrum about Donald Trump.

Working my way through Dying of Whiteness, I sensed that health matters are not Metzl’s main interest. What he really wants to do is take us on a freakshow tour of poor, misbegotten rednecks out of Erskine Caldwell. All in the interests of “science,” you understand.

He brings out his star attraction in the Introduction: a forty-something Nashville man who lives in low-income housing, has jaundice, and also advanced liver damage due to Hepatitis C. Did I leave anything out? He’s dying, and uses an aluminum Zimmer frame to get about.

Metzl whimsically calls this guy Trevor. He wants you to know that Trevor can’t get Obamacare because Tennessee has blocked it. The implied moral seems to be, “Don’t be like Trevor, get Obamacare!” But of course no preventative healthcare or insurance scheme could help Trevor at this point, anyway. It seems cruel even to suggest it.

But Metzl has further cruelty in store. Trevor has some lines to deliver:

“Ain’t no way I would ever support Obamacare or sign up for it,” he told me. “I would rather die!” When I asked him why he felt this way even as he faced severe illness, he explained, “We don’t need any more government in our lives. And in my case, no way I want my tax dollars paying for Mexicans or welfare queens.”

At a later stop on the tour, Metzl mills around a riverfront Missouri town where almost everybody carries a gun and wears camouflage – the kind of cartoon-America hinterland town that turns up in wow-just-wow features in The Guardian. Anyway, the gun-and-camo theme park is the backdrop for a discussion about the evils of “gun culture” and the ongoing epidemic of firearm suicides in these here parts.

He attends a support group for people who have lost a family member that way. A married couple tell a blackly comedic story about how their son blew himself up so badly that nothing was left of him but an arm. So “we held an open casket showing the left arm. It felt like enough.”

At other times, he dwells upon the tragicomic death of Becca Campbell, a St. Louis barmaid who killed herself in a freak accident when her Toyota got rear-ended. This was during the Ferguson riots in 2014. She had a couple drinks inside her and was playfully waving her gun, when – thump-bang! As with so many of Metzl’s examples, this is basically a freak story, a one-in-a-million incident that has no lesson or moral. Except maybe – guns are dangerous, guns are bad.

Metzl has a fixation on gun culture. He keeps coming back to it and spends several chapters on it throughout the book, though it really has nothing to do with failing healthcare or social services. He conjures up elaborate theories about how firearms are mystical symbols of status or whiteness or masculinity, and maybe an instrument of racism, too. Basically, he’s studying this stuff as might a foreigner whose head is full of film Westerns, comic strips, and caricatured histories of the Old South. Metzl still sees everything with eyes from Mitteleuropa. His father and grandparents were Austrian Jews who got out in ’38, just before the Anschluss.

The hype for Dying of Whiteness reminded me of another shifty book that got a lot of media buzz, back in 2016. That, too, was promoted as a slam at Donald Trump and the Heartland losers who supported him. The book was Hillbilly Elegy,[1] and its young author, traveling under the name of J. D. Vance, went around the talking-head circuit for months to explain why Trump was so popular with poor white trash.

Hillbilly Elegy wasn’t about Donald Trump at all, but you wouldn’t know that from the interviews, which were all about Trump, Trump, why are out-of-work coalminers supporting Donald Trump? In fairness, you can’t expect interviewers to read books. And actually, most of the spin on Hillbilly Elegy was sheer fraud. To begin with, there was the title, and the author, who grew up in Ohio and wasn’t a hillbilly. And his real name wasn’t J. D. Vance. The only thing that kept this media blitz from looking like another J. T. Leroy hoax is that the publishers had it on firm authority that our Vance person had gone to Yale Law School, where his advisor was bestselling author Amy “Tiger Mom” Chua. Which anyway explains how his turgid memoir got published in the first place.

But the biggest parallel between the Hillbilly Elegy author and Metzl is that they both push the same disinformation about Trump voters: specifically, that Donald Trump was elected by sad-sack “white working class voters,” even though November 2016 exit polls clearly show him sweeping every white demographic and economic stratum.

This must be why Metzl focuses mostly on downscale communities and pitiable, sickly people. Why doesn’t he balance them out with some upscale suburbs, you might ask; some normal, healthy middle-class, upper-middle-class conservative types? Because that would upend his message? Or because he wouldn’t be comfortable with people he can’t look down on?

» Guide to Kulchur, Episode 20
Game of Thrones Seen from the Right
The Firebombing of Dresden