The Problem with Memphis 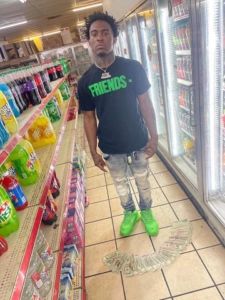 During the weeklong span from September 2-8 in Memphis, Tennessee, a black career criminal abducted and murdered a white female jogger, a black teenager went on a prolonged murder spree that he livestreamed on Facebook, and another black teenager, inspired by both earlier crimes, filmed himself driving around Memphis and threatening to shoot the first white woman he saw.

It was a typical late-summer week in this brain-meltingly hot shithole on the banks of the Mississippi River.

In the predawn hours of September 2, a white pre-kindergarten teacher and mother of two named Eliza Fletcher went out for her last-ever jog. Unlike Ahmaud Arbery, she was actually jogging. Fletcher’s remains were found three days later by police, who smelled “an odor of decay” near some high grass adjoining a vacant residence in a poor side of town. Police had arrested 38-year-old potential particle physicist Cleotha Abston the day before in connection with Fletcher’s disappearance. Abston, who also goes by Cleotha Henderson and is known by his closest friends as “Pookie” and “Wild,” had recently been released from prison after spending nearly 20 years for the 2001 kidnapping of a prominent Memphis lawyer whom he’d kept locked in his car trunk for hours.

Police suspect that Abston beat, raped, murdered, and tried to set Fletcher on fire. After arresting him, police also charged Abston with kidnapping and raping another woman in 2021.

“Say her name,” [conservatives] tweet, as though there could possibly be an analogy between Ms. Fletcher’s death, allegedly at the hands of a man whom the Shelby County district attorney has characterized as a lone killer, and Breonna Taylor’s killing at the hands of the Louisville Metro Police Department. . . . “Say her name,” they tweet, as though Black [sic] women aren’t raped and killed every single day without making national news. . . . Any cursory glance at the history of human predators will make it clear that there is no race requirement for killers, but race isn’t the only detail endlessly discussed in the public discourse about this case. There’s also the crime rate in Memphis, the way the media covers crime and the time of day when Ms. Fletcher habitually got in her run.

Ah, more jogging tips! It was Ms. Fletcher’s fault for jogging before daybreak.

But I agree it’s dumb to make an analogy between Fletcher’s death and Breonna Taylor’s. Fletcher’s husband was at home asleep with the kids, whereas Taylor’s boyfriend was shooting at cops.

And yes, black women are raped and killed every day without it becoming a national news story. The only part you left out is that black men are doing nearly all of the raping and killing.

And sure, a “cursory glance” at human history would suggest that there is no “race requirement for killers.” However, according to FBI stats regarding homicide for the past few decades, killing someone almost seems to be a prerequisite for young black males.

Around 1 AM on September 7, two days after police found Eliza Fletcher’s corpse, a 19-year-old black male from Memphis named Ezekiel Kelly — who was free as a bird after serving only 11 months of a three-year sentence for two counts of attempted first-degree murder, possession of a firearm, and reckless endangerment with a deadly weapon — began a murder spree that would take him into the early evening. Using his Facebook alias “Zeek Huncho,” this rocket scientist-in-training livestreamed himself randomly shooting at white and black Memphians. He apparently committed several carjackings in the course of his spree before police finally caught up with him across the Mississippi state line. Two of his confirmed murder victims are black, while one, a medical assistant and mother named Allison Parker, is white.

If you search for the subhead “Randomly Shooting a Man in an Autozone” on the linked page, right below it is a very short and very psychotic clip of the barely human Ezekiel Kelly babbling to himself in his car before he walks into an AutoZone and shoots a white man named Rodolfo Berger, who is currently in intensive care.

Kelly was photographed smiling after his arrest. He’s also smiling in his mug shot.

Memphis Mayor Jim Strickland went way out on a limb and took a hard, risky stance when he declared that Kelly’s killing spree was “not acceptable.”

The day after Kelly’s rampage, another calculus wizard named Reginald Williams filmed himself decrying “racism” in the same breath that he threatened to kill white women:

I’m fixing to go on ahead and go Zeek Mode on nothing but white people. I catch any white hoe on the sidewalk, you going to get popped tonight. He [Ezekiel Kelly] already shot a white old man. I’m fixing to shoot a white old lady, shit, while her grandkids [are] in the car.

Williams was arrested and charged with committing an act of terrorism, civil rights intimidation, harassment, and disorderly conduct. The local ABC affiliate, as is to be expected at this point, left out the whole “old white lady” angle in its headline: “Man arraigned on charges of making threats to Memphis community on social media.”

Statistically, old white ladies are probably only about 5% of the “Memphis community” these days.

A police affidavit claims that Williams said he became angered after some “white lady” left a comment under some tribute video he made about Ezekiel Kelly. He also told them that he was driving around on a “memorial run” of Eliza Fletcher’s kidnapping and murder.

This chart ranks Memphis as America’s second-most dangerous city in 2022, behind only the even blacker Detroit. This one places it in a more respectable sixth place.

The US Census Bureau named Memphis the nation’s poorest large metropolitan area in 2011.

A 2018 essay titled “‘An Unseen Light’: On the History of Black Memphis” places the city’s problems exactly where you’d expect two completely full-of-shit “academics” to place them:

The system of white supremacy dictated that African Americans lived behind masks, hiding their frustrations and aspirations. . . . African Americans shaped the politics and culture of this city at the crossroads . . . [with] the core thematic elements of the Black [sic] freedom struggle: Black [sic] responses to the pervasive nature of white violence. . . . For Black [sic] folks in Memphis, the constancy of racial violence pervaded every facet of life. . . . Poverty lay at the heart of inequality in Memphis.

Are you sure you don’t have that all ass-backwards? Doesn’t basic, innate, immutable human inequality cause most economic disparities?

And where the hell is all this “white violence” these days, anyway? What century are you living in?

It appears that the roots of Memphis’ modern problems started in 1862, when Union soldiers conquered Memphis via the Mississippi River. Hordes of blacks followed the Yankee soldiers into Memphis, increasing its black population nearly sevenfold by the time the war ended.

In 1866, a gunfight between black Union soldiers and white Memphis cops led to the Memphis Riot, which left 42 black and only two white Memphians dead. It also led to the exodus of about one-quarter of the city’s black population to safer climes.

A rash of yellow fever epidemics during the 1870s caused about 75% of the city’s population to flee, leaving a ghost town mainly populated by very poor blacks and very poor Irish whites.

As an Irish white who can confidently say I’ve never been rich, I am fascinated by urban blight for anthropological, archeological, and architectural reasons.

I first visited Memphis in 1987, when blacks formed a slight majority, outnumbering whites by about 55% to 45%. The nominal reason for my weekend vacation was to visit Graceland — which was much smaller than I expected, almost like a toy model of what I’d envisioned — but I drove through enough of the town to realize how much of it was scorched and destroyed, even back then. A kind and generous man, I enriched the local black community by stopping at some hole-in-the-wall restaurant for some chitlins.

From its north side to its south side, Memphis hosts the most aggressively dumb and Mesozoic Era blacks in all of our nation. Blacks seem cruder and more zombie-like in Memphis than anywhere else, which is a tremendous accomplishment when you sit back and ponder it. Due to the forces of nature and history and bad luck, this ruined city on the banks of the Mississippi somehow serves as a pool filter that traps all the scum.

According to the most recent available stats, blacks comprise nearly 65% of the population, whereas whites have shrunk to about 27%.

But none of the recent articles about the recent mayhem in Memphis dares to suggest that the problem with Memphis is that it’s become too black.

« On Right-Wing Primal Urges (or, Everything You Ever Wanted to Know about Debating with Yourself over Politics in the Wee Hours of the Morning, and Forgot to Ask)