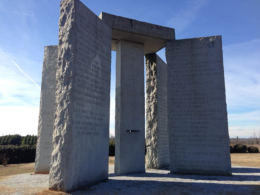 Until a few days ago, the infamously ominous stone tablets known as the Georgia Guidestones sat a mere 88 miles from where I’m typing this. Often referred to as the “American Stonehenge,” the granite edifice was built in 1980 under the financing and detailed instructions of a man who insisted on anonymity and referred to himself only as “R. C. Christian,” which some suggest was a reference to “Rose Cross Christian,” aka “Christian Rosenkreuz,” founder of the Rosicrucians.

The Guidestones gained legendary status in conspiracist circles for the fact that ten “messages” are engraved on the slabs in eight different languages: English, Swahili, Russian, Hebrew, Spanish, Sanskrit, Arabic, and Chinese. Among the prickliest messages for those wary of creeping globalism were:

Maintain humanity under 500,000,000 in perpetual balance with nature

Rule passion — faith — tradition — and all things with tempered reason

Clearly, it was the “Let’s slash the total global population by billions” part that set the anti-globalists’ antennae flailing. The one-world language and world court things didn’t help, either. And the idea of applying “tempered reason” to things such as faith and tradition is likely to send those who spend their entire lives staring into the rearview mirror into a state of perma-conniptions.

At around 4 AM on Wednesday morning, a surveillance camera filmed an explosion that took out one of the slabs and caused damage to other parts of the structure. Although the Georgia Bureau of Investigation clearly stated that “unknown individuals detonated an explosive device,” which would normally make the entire site a crime scene ripe for forensic investigation, late Wednesday afternoon the entire structure had been bulldozed.

Some have taken great joy in the demolition of the Guidestones, and I understand that victories are so sparse these days that people will look for succor wherever they can find it. My sense is that the Guidestones were never anything more than the vanity project of some starry-eyed hippie with lots of money to blow. As far as I can discern, Klaus Schwab is sleeping well and continues to plot a world where we’ll own nothing and enjoy it.

Japan, a Country Full of Slant-Eyed, Bucktoothed Little Yellow Rats Who Deserved Hiroshima and Nagasaki, Passes Law Making “Online Insults” Punishable By Up to a Year in Jail

A little more than a century ago, Japan was a psychopathically confident imperial power that was able to vanquish Russia in a mere 18 months. In the Second World War, its cruelty to the Chinese via Unit 731 made the Nazis look like Cub Scouts, or maybe even Webelos. The bombing of Pearl Harbor was one of the ballsiest military strikes in history, right up there with 9/11.

But apparently all it took were a couple of strategically-placed atom bombs to turn Japan into a nation of pussies. Not only do the Japanese have one of the world’s lowest natural birthrates, but the island nation that gave us the ninjas and the samurai has now cemented its place as Global Crybaby Central by passing a law that makes “online insults” punishable by up to a year in prison.

The law squeaked through the Japanese parliament’s Upper House last Monday in the wake of publicity surrounding the 2020 suicide of pro wrestler and reality TV star Hana Kimura, who took her own life after enduring relentless taunting by a notoriously vicious online community of wrestling fans. Before killing herself, Kimura wrote:

The new law, which took effect Thursday, will punish offenders with up to $2,200 in fines and a year in jail — up from previous punishments of $75 and a maximum of 30 days behind bars. Japan’s penal law distinguishes between “insults,” which are defined as generally demeaning statements directed at someone, and “defamation,” which consists of publicly demeaning someone while citing specific facts.

Both in a vague general sense and in strictly scientific terms, I declare the Japanese to be a bunch of slit-eyed undersized shrimp-dicked historical losers, and I dare them to do anything about it.

Whether arguing with people online or in the streets, I’ve found it’s efficacious to come at your opponent from strange and unexpected angles. It confuses and temporarily disarms them, which allows you to go in for the verbal knockout punch. This is why I am encouraging anyone who chooses to argue with black people, whether male or female, to refer to them as “douchebags.” It’s a pejorative I’ve only ever seen applied to white males and Italians. I’ve never heard a black person referred to as a “douchebag” before, but a cursory review of some of their very public misdeeds would reveal that, male and female, they engage in some undeniably douchey behavior.

In late August, Emmett Till will have been dead for 67 years, and it’s a testament to exactly how non-violent whites have been toward blacks during that two-thirds of a century that they keep dredging up Till’s bloated corpse from the Tallahatchie River and putting it on garish display yet again because whites have really been falling behind in the interracial-violence sweepstakes.

Last December, the US Justice Department formally closed Till’s case, arguing that the statute of limitations had run out on civil suits and there were no equivalents of hate-crime laws back in the 1950s.

But when news recently emerged that an arrest warrant for Carolyn Bryant Donham — the woman who, according to legend, originally accused Till of either whistling at her and/or pawing her in a grocery store in Money, Mississippi back in 1955 — was found collecting dust in Mississippi, a group of blacks clad all in black stormed three different residences in Raleigh, North Carolina, attempting to find the 88-year-old white woman and alleged dementia patient and somehow drag her to justice.

While streaming his fruitless incursions into three separate Raleigh residences searching for an 88-year-old white woman whose crime was alleging that a black youth whistled at her, Shabazz said:

What a bunch of douchebags.

Mind you, accusing someone of whistling at you or of grabbing your midsection is not a crime. But this didn’t stop Malik Shabazz, head of something called Black Lawyers for Justice, from leading a group of disgruntled ex-slaves to storm two different private residences and a nursing home screaming for Donham’s head. Footage shows the elderly, terrified, and most likely constipated residents of the nursing home acting startled and confused at the sudden infestation of howling colored people screaming about justice and black power.

Let’s forget that Till’s father Louis was executed by the United States Army for raping two Italian women and murdering another. Forget about the rumors that the young Till was sent from Chicago to Mississippi due to allegations that he’d begun to get physically abusive toward his stepfather. Let’s completely forget the absurdly lopsided interracial rape statistics.

Till’s cousin Priscilla Sterling was inspired by this act of mass douchebaggery and told a local TV station:

You cannot ignore this. If this is what’s needed to do for us to change our mindset, our behaviors and attitudes in the society, then this will do it. This will do it. Execute the warrant.

In other words, if you want black people to stop terrorizing elderly white people over something that happened 67 years ago, bring this senile old white lady to justice.

How about you douchebags stop raping people instead?

Three Women of Vibrancy Arrested in NYC for Attacking Cashier Who Charged Them $1.75 for Extra Sauce on Their French Fries

Although I’m ancient enough to remember when $1.75 would buy you eleven orders of McDonald’s fries, and I was initially appalled to learn that Bel-Fries charges nearly $10 merely for their foo-foo pommes de terre frites, when one factors into the equation that the mere rental cost for a 1,600-square-foot office in Lower Manhattan can set you back $100K a month, it doesn’t seem too cheap or chintzy to charge $1.75 for “extra” sauce.

It’s to be assumed that these honking pigs had already received the standard amount of sauce, so there was absolutely no excuse beyond a constant state of hyper-aggrieved racial entitlement that had these porkers flipping the bird and throwing blunt objects and stealing money from the cash register and standing on the counter to twerk and injuring two workers while all their associates hovered in the background, filming and giggling.

I remember a much more wholesome America where Spanegro women were grateful to be eating the occasional live rat they’d plucked from tenement basements in the Bronx. Who decided it was a good idea to let these people get fat and confident?

Remember the supremely idiotic Internet trend of “planking” from 2011, where people would take pictures of themselves making their bodies as rigid as a surfboard and then upload it to social media — that is, if they didn’t fall to their deaths in the course of taking the picture?

The Internet will always find a way to make things dumber than before. The “Blackout Challenge,” aka the “Choking Game,” has tentacles that reach back until at least 2008, at which point the Centers for Disease Control said that 80 people had already died as a result of failing the challenge.

Basically, the “challenge” is to film yourself choking yourself until you lose consciousness. One fails the challenge if one chokes oneself to death in the process. It’s a really, really, really stupid “game,” and although I guess that any death of a child is tragic, it’s hard to bemoan the loss of someone willing to choke themselves to death for attention.

Last week the parents of young Lalani Erika Walton, 8, and Arriani Jaileen Arroyo, 9, sued the software giant TikTok, claiming that their young black daughters choked themselves to death only because they were encouraged to do so by TikTok’s algorithms. The company denies the allegations, claiming that it has banned the hashtag #BlackoutChallenge. The company did not state it in so many words, but one suspects it was tempted to write, “We’re not responsible if your child is stupid enough to choke themselves to death for attention, especially when dying sort of takes all the fun out of getting attention in the first place.”

Another lawsuit filed against the app in June states that at least seven different children, ranging in age from 8 to 14, died over the past year as a result of thinking it was a good idea to take the Blackout Challenge. The complaint said that the trend “encourages users to choke themselves with belts, purse strings, or anything similar until passing out.”

As bad as this week might have been, dear readers, at least take solace in the fact that you didn’t choke yourself to death in the vain quest for posthumous attention.