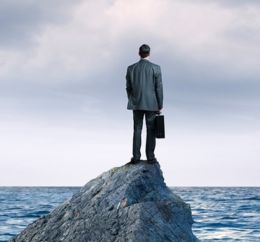 There comes a point in every man of the Right’s life — or more likely every year — in which he asks if it’s all worth it. Is it time to pack up his bags, “ride the tiger,” and work on himself as opposed to caring about the wider world? Yes, my friends, this is and always remains the question — though the answer is always no. A caveat is in order, however.

The idea has been floating around recently that focusing on the wider world in any way is a waste of time. Instead, so the theory goes, disaffected dissidents should focus on themselves, their families, and perhaps local politics. This seems to be the method of choice of truly burnt-out nationalists. There is some truth to this, and it is not necessarily an unneeded reality check for some people. Nevertheless, the answer to whether we should follow this path exclusively remains no.

As has rightly been remarked on this issue by others, if one side simply wishes to be left alone while the other side wishes for world domination, it takes no Nostradamus to predict which side will come out on top. This has been the bane of the ordered, masculine principle since Eve ate the Fruit, and since Yin began effecting Yang. The conservative by definition tends to want to be left alone and keep things as they are, an anchor against the feminine and chaotic. In contrast, the negative principle can never be satiated. Thus, this revelation may put to rest the idea that controlled opposition conservatives are coordinated in being an anchor rather than a true counterweight. This has been inherent in the nature of conservatism throughout time.

I was having a conversation with a friend after church the other day and his perspective is the localist perspective taken to the extreme. Not only has he abandoned macro-level politics, but he has also abandoned politics altogether, preferring to live a somewhat monastic life, accepting that this world is fallen. We both came to the conclusion — one that I believe is wise and much needed — that a great problem with our Faustian politics is that we assume that the world must be wholly transformed in our image. As Christians, we believe that the world is inherently fallen and thus treat utopian ideas with skepticism. At the same time, it is necessary to be vigilant about the fine line where prudence becomes cowardice.

The macro level cannot be ignored wholly for the simple reason that the macro level will not ignore you. Many of the things that affect us most are mandated by the federal authorities, or even international ones. To simply bury our heads in the sand would not only be cowardice, but suicide. The only way to deal with this fact, from those who promote the purely localist answer, is stoicism. While stoicism is necessary when the odds are so seemingly against European civilization, I do not believe it is enough alone.

On the one hand, a purely conservative force cannot stop chaos, only delay it. On the other, the cycle of history does not change. It is probably a fool’s errand to attempt to stop the waves of time from breaking on the sand — unless, of course, it is done for the purpose of pure action. What a pickle then we are in, it would seem. We cannot stop the decline of everything we know, and yet we cannot stand by while this calamity occurs.

So, what is the solution? I do not believe there is a solution to end all solutions. Western Civilization does not just have a problem, but rather is in a complete quagmire. Certain problems should be declared unsolvable outright, as we can only begin to affect the world to the greatest possible extent after accepting that which is out of our control. This is no excuse not to better the greater world, however. And focusing on the world should never be to done to the detriment of working on one’s self. While there is no true solution, I believe that creating a synthesis out of this thesis and antithesis is the least I can do.

The act of self-improvement is in itself an act of defiance. The world which the antichrist of Jewish globalism wishes to bring about is inherently Satanic, and therefore implicitly ugly and deformed. Self-improvement is to be a beacon in this sea of lies. To be superior to one’s enemy is a joy I wish for all my friends. Socrates’ well-known words — “Let him that would move the world first move himself” — are only a cliché because they have remained true throughout time. Improvement of the body, mind, and, most importantly but often forgotten, the soul are of the utmost importance for the battle we are immersed in.

The local level is also important. The lone wolf is not only foolhardy, but unfulfilled. There has been much dissuasion in the form of the idea that building communities is “running away.” This is foolish and often comes from those who are obsessed with politics at the national or international levels, yet often have a quite small or even no “tribe.” Those who build real-life networks as opposed to dedicating their life to a macro-level struggle should not be shamed and dissuaded from their work. Quite the opposite. It is these master organizers who will be the bedrock of like-minded community organization. From small communities we will eventually unite the tribes and create networks which will potentially transcend not only towns, but international borders. All activism, as long as it is not counter-productive, is good activism.

But we should not forget about the macro level. While those focused on this realm shun those who focus on the local level, others wholly cede the macro level as a lost cause. Both extremes are wrong. While the self, and especially the community, come first and should be prioritized, as they are the closest to one’s own person, the national and international level cannot be ignored. If resistance to the GAE (Global American Empire) does not develop into the macro organization needed to create a parallel system which can eventually go toe-to-toe with supposedly “legitimate” bodies, and even supplant them, then all we can expect from activists is Ruby Ridge or Waco writ large. The answer is not to plug one’s ears and pretend the macro level does not matter, but to balance it with other levels of organization and improvement. The macro level is the greatest and most difficult hurdle, and it is here that some stoicism will be needed.

In essence, the solution for the time being is to actively improve one’s person while organizing at both the local and national levels — and even the international, for a small vanguard of intellectuals and theorists. Every nationalist should ideally be far superior to his political adversaries as well as a pillar of his community. On the macro level, one can do anything from donate to friendly think tanks, NGOs, and so on to simply having a functional traditional family.

Whatever you do, keep it balanced, be useful, and survive. There is no clear path to victory now but, rest assured, once we figure out how to survive, thriving will be just around the corner.

« Counter-Currents Radio Podcast No. 452 The Best Month Ever on The Writers’ Bloc with Stephen Paul Foster

» The Fall: The White Crap that Talks Back