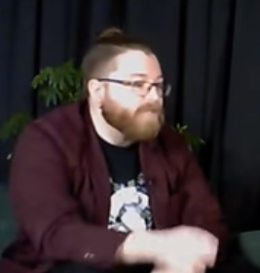 Two wild stories came out of the Breadtube scene within a 12-hour period earlier this week. Perhaps both deserve their own article, but they happened at the same time, and they might be related. I’ll explain why at the end.

The first story occurred on Monday night, when Communist Breadtuber Vaush announced to the world that he was a federal informant. In the middle of a livestream, the subject of “fed ops” came up and Vaush made the following jaw-dropping admission:

Like a fed op? You could say that about literally anything. There are informants everywhere. I’m an informant. Why do you think I did antifa work back in Santa Monica, you know? Yeah, I was ratting out names, absolutely. We’ve all been informants.

Vaush is a man who is willing to admit a lot of things about himself that anyone possessing even a molecule of shame would be too embarrassed to confess: that he’s a degenerate, that he’s a Communist, and that he’s pedophilia apologist (Vaush estimates that approximately 10% of his audience are pedophiles). But being a federal informant is usually something people will only admit to if they are caught red-handed, like Chris Cantwell.

You might be thinking that what Vaush means is that when he was in antifa, he was researching Nazis and reporting the ones who made violent threats to the feds. That’s “snitching” for sure, but when most people hear the term “fed,” they think of someone who reports on their own side.

All we can say is that antifa certainly did not interpret his statements as snitching. They are taking him at face value. 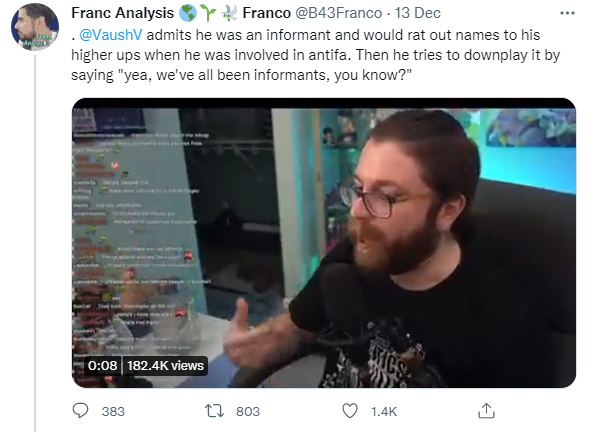 Vaush has since tried to claim he was joking.

In my opinion, being a federal informant is not something you joke about. If that was a joke, it was a pretty dark one.

I might still be inclined to give Vaush the benefit of the doubt if it were just that one incident, but in recent months, people have been alarmed at the amount of hawkish neocon talking points Vaush has been promoting. He has come out as being pro-intervention in Syria, and he is anti-Assange. Last week he said he would support a CIA coup to overthrow Putin and install a more “pro-Western” Russian leader.

Also, in a stream Vaush was on last month, he said:

As an anarchist, fuck the FBI. However. There are certain things we can trust the FBI to do that we can’t trust the police to do. Preventing civil uprisings is one of the jobs of the FBI, and right now, which group of people are most likely to engage in a supremacist uprising in this country?

This is not slam-dunk evidence that Vaush is an asset, but I would say it rises to the level of “probable cause.” If the CIA had wanted a controlled-opposition Communist out there to make the Lefty kids decide that imperialism is totally rad, I can’t see how that person would be much different from Vaush. And if the darkest speculations about Vaush’ proclivities are true, he would be easy to flip. Could he actually be trying to normalize acting as a federal informant?

The only reason that “Vaush is a fed” did not go more viral than it did was because it was drowned out by an even bigger story on Tuesday morning.

I recently wrote about the wave of censorship against antifa doxers on Twitter. With the possible exception of sex workers, this was the first time I can recall where a significant ban wave affected non-Right-wingers.

At the time of writing, I wasn’t sure if this was the result of Right-wingers exploiting a new loophole in Twitter’s terms of service that would soon be closed, or if this was perhaps part of a larger plan. I wondered if perhaps Big Tech wanted to purge a few token Lefties to give themselves some plausible deniability in case they are ever hauled before Congress. “Well, we aren’t only banning Right-wingers. Look, we banned some antifa, too!”

That second theory just received a big boost Tuesday morning when Vaush and Breadtube megastar Hasan Piker were banned from the video streaming site, Twitch. In Piker’s case he only got a one-week suspension, but Vaush has been permanently banned from the site.

The real curveball, however, is why they were banned — and you’ll scarcely believe it. Twitch banned Vaush and Hasan Piker for anti-white racism. 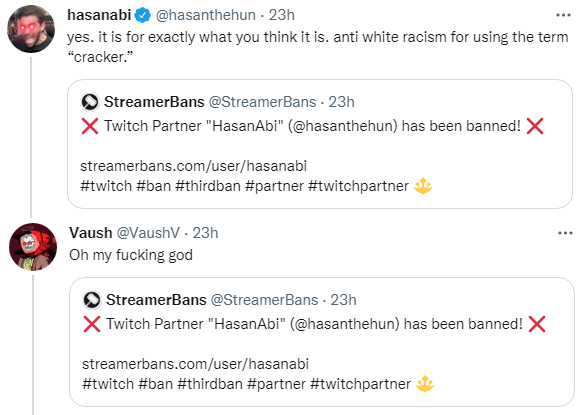 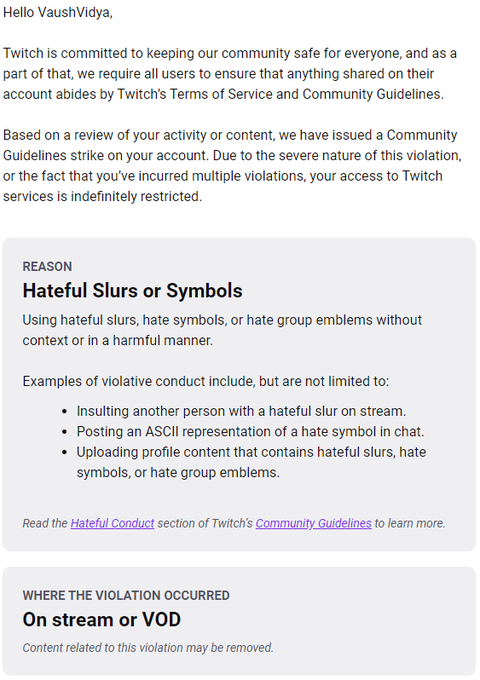 More specifically, they were banned for using the word “cracker.” Apparently, Piker got into an argument with one of his listeners over whether “cracker” was a racial slur, and repeatedly called the person one to prove it’s not. Twitch disagreed. Vaush is apparently keen on the word as well.

I think a general rule of thumb is that any term for a group of people which that group of people does not use to describe themselves is a slur. I’m sure there are exceptions. I remember years ago seeing David Cole defend his use of the term “shiksa” by claiming that there was no derogatory intent behind the term, and that Jewish men tend to think favorably of shiksas. But you know, “shiksas” don’t call themselves “shiksas,” so there is something distasteful about it to me.

These bannings took everyone by surprise on both the Left and Right. In a tweet, Scott Greer approached the news with caution: “Prediction: They will get reinstated and Twitch will change its policies to allow anti-white racism.”

I’m not so sure. I think this may be another example of Big Tech doing some CYA. If they are ever called to testify before Congress, they can now say, “Well, we also ban people for being racist to whites!” They picked two extremely high-profile Lefties — one white guy and one Turk who could pass for an Italian – out of which to make examples.

Whatever they said was probably mild compared to your average BLM livestreamer. The fact that the first two people to get banned for racism against whites are both super-famous white/white-presenting streamers and not some deranged Tariq Nasheed type who calls whites “children of Satan” says that these are designated tokens to me.

Another possibility is that the liberal establishment has realized that the anti-whiteness is helping the Republicans, and they are trying to turn down the volume. The recent Virginia governor’s race, which some saw as a referendum on Critical Race Theory, resulted in a decisive Republican victory in a state that had gone to Biden the year before. Couple this with the term “anti-white” becoming normalized in mainstream Republican discourse, and any astute observer will recognize that something is going on.

The more intelligent Jews surely know that in order to bring about white genocide, they have to actually be in power, and in the short term, open anti-whiteness is an obstacle to that. They can’t rig every election — not yet, anyways. So maybe these bannings are the beginnings of an attempt to cool down the rhetoric. We shall see.

This episode also raises another question. It looks like we may see more Left-wing censorship in the future. How are we on the Right supposed to react to this? Is it appropriate to celebrate, or would that look like hypocrisy? I know I should do the whole Voltaire bit: “While I may disagree with what you say, I will defend to the death . . .” But I would feel like a chump in standing up for someone’s right to promote pedophilia when I know he does not support my right to advocate for my own existence. 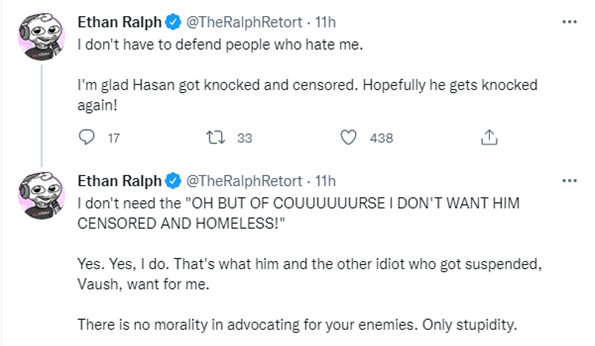 If some Lefty got banned and said, “I was wrong. I should have opposed Big Tech censorship sooner. I should have said something when Milo got banned,” yeah, I might be willing to extend the hand of friendship in the name of one struggle (within reason, of course).

I have never actually seen a Lefty do anything like that, however. I’ve seen Lefties get banned, declare the ban unjust, and yet still uphold the company’s right to ban them. Their objection is never on free speech grounds. They don’t oppose censorship in principle; just in their own specific case. It’s always, “Big Tech is wrong to ban me because I’m a good person.”

Are these two stories connected: Vaush being a fed and then getting censored the next day?

If we want to get into tinfoil hat territory about it, there are two possibilities. It could be that the bans were enacted specifically to drown out the revelations of Vaush being a fed. It could also be that the ban was a way to give Vaush some anti-establishment street cred (“If I was a tool for the establishment, why would the establishment censor me?”). I’m sure losing Twitch is a bummer for Vaush, but he still has YouTube, so this is hardly a death blow.

On the Daily Stormer message board, Andrew Anglin suggested that by blowing his cover, Vaush has made himself a liability to his fed handlers:

This whole DNC fake socialism thing is really fragile, and they can’t really have these people going around saying they’re working for the feds. If this guy is going to do that, they can dig up another fat pedophile to astroturf stream talking points for 12 hours a day in about 12 minutes.

The main problem with these theories is that if these bannings came in response to Vaush admitting he’s a fed, why throw Hasan Piker into the mix?

A few months ago I did an interview with American Renaissance in which I said:

They have just about run out of White Nationalists to ban and the only people left are controlled opposition and people with superlative optics, and even those people are probably on borrowed time. There is now a cottage industry of people whose job it is to find people online to deplatform. It’s how they put food on the table. I don’t think those people will ever get to a point where they say, “Well, that’s it. All the racists are gone. We can go home now,” because then they would be unemployed and might be forced to go and do something productive. They will find new threats to democracy.

I dare say that I think my prediction is starting to come to pass. By opening the door to censorship, Big Tech has created a monster, and now fresh sacrifices need to be regularly dropped into the volcano in order to appease the gods of censorship. They ran out of all the pure virgins and are now abducting prostitutes off the street.