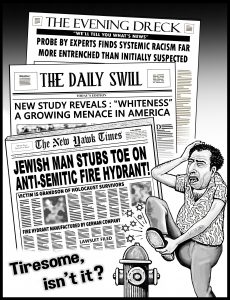 Not everyone hates the winter as much as I do — I’ve even argued that the primary impetus for European colonialism was the perfectly reasonable quest for warmer climes — but if you’re similar to me in this regard, with all due apologies to T. S. Eliot, April is not the cruelest month — February is. And apparently, a “major winter storm” will sock huge swaths of the USA this week. For me, the worst part of the year is that deep-frozen dark patch of dead somnolence between the Super Bowl and the blooming of the first tulips.

Newspaper editorial staffs continue flogging themselves for being “too white.”

Albinos are still being hunted down and killed in African countries because the people there are dumb enough to think that albino body parts are magical.

The “everyone’s a fed” panic is still with us, but now it’s metastasized and spread everywhere.

And despite tireless efforts to deprogram them from their prejudices, bigoted thinking among robots is getting worse and worse.

Since I’ve only recently realized that the top news stories are selected for us and that most of us are unwittingly led like dogs on a leash by the news cycle, I strain to avoid the viral topics as much as possible and prefer to analyze current events from different frameworks.

One can learn a lot about the state of American society simply by studying how double standards are applied to terms that, if objective American journalism truly existed, would be handled similarly by writers. For example, a quarter-century ago I wrangled an entire book from noticing that the American press did not treat the words “redneck” and “nigger” as equivalent terms of racial disparagement.

This week, I was curious to see if the same sort of hypocrisy extended to how writers approach the terms “blackness,” “Jewishness,” and “whiteness.” In the process, I stubbed my toe on what is the most annoying social-justice buzzword I’ve heard in a coon’s age — “brownness.”

I searched these terms on Google News, which may skew the results in favor of the obvious biases of Google’s owners. Not all of these stories are recent, but they showed up on Google News nonetheless.

As you are likely aware, “blackness” (NO, I will NOT capitalize it) is something to be celebrated. It’s something that erupts from black skin in a multicolored confetti explosion of sensuality and self-empowerment. My searches failed to uncover a single instance of any writer, black or not, finding anything objectionable about blackness.

Actress Viola Davis, whose net worth of $25 million could feed an entire African country for a few months, laments the days of old when she felt compelled to “make any hint of my blackness disappear.”

Actress Gabrielle Union, whose net worth of $40 million could feed an entire black country for a few months and every black player in the NBA for a year, refers to assimilation as a “poison” and says she is “constantly reaffirming” her daughters’ blackness “outside of them so they can constantly see themselves in the flesh,” whatever that means.

The Executive Vice President of The Negro Spiritual Scholarship Foundation — no, I’m not making this up — urges us to view history through “the clear, and clarifying, lens of blackness.”

I’m interested in the infinite possibilities of blackness, too. It’s a very intriguing concept. Can anyone provide a link?

Concomitant with elevating blackness is attacking and eliminating anti-blackness, even when it pops up in the “Asian Community” and the “Latino Community.”

I can’t remember ever seeing the phrase “White Community” used in a news story. “Is it good for the whites?” is not a question that whites are currently allowed to ask.

By contrast, “Jewishness” is something to be lauded and protected, even if it took two World Wars and may require another World War or two to keep the huddled Jewish masses safe.

“Jewish identity” and “Jewishness” are at the core of a recent essay on the work of artist Philip Guston.

The trial of the Chicago 7 — which pitted a conservative, pro-assimilation Jewish judge named Hoffman against a radical yippie Jewish defendant named Hoffman — throbbed with “hidden Jewishness,” according to a kosher egghead who claims that his bailiwick is “Martini Judaism.”

Jewish comedienne Sarah Silverman appeared on Jewish radio host Howard Stern’s show to kvetch that a cinematic rendering of a Jewish author’s book “undid the Jewishness” of the original.

A Ukrainian immigrant to Israel sued his supervisor, charging racial discrimination after his boss “questioned his Jewishness.”

Wait — racial discrimination? I thought they were a religion.

Not anymore, apparently. Although younger American Jews increasingly reject Judaism, 94% of Jews in a Pew survey claimed they were “proud to be Jewish.”

That article impressively managed to cram 13 “Jews” within a mere 84-word passage, which may be a world record for Jews-to-words ratio:

Married Jews of no religion are much more likely than married Jews by religion to have non-Jewish spouses. Jews who have non-Jewish spouses are much less likely than those married to fellow Jews to be raising children as Jewish by religion and much more likely to be raising children as partially Jewish, Jewish but not by religion, or not Jewish at all. Furthermore, Jews who are the offspring of intermarriages appear, themselves, to be more likely to intermarry than Jews with two Jewish parents.

Apparently, Jewish pride is nothing to be ashamed of. CNN election forecaster Harry Enten says “shalom” at the end of his segments and spoke with the Jerusalem Post about his Jewishness: “I am Jewish, and proud of the fact that I’m Jewish, and I want people to know that.”

The Baltimore Sun published an OpEd saying it was unfair to demean Bernie Sanders as an “old white male” because he is, in fact, an old Jewish male who once stated: “I am Jewish, and proud of the fact that I’m Jewish, and I want people to know that.”

And now “brownness” is apparently a source of pride, especially when contrasted with whiteness. A woman of partial Afghani ancestry who was raised in Ukraine publicly scolded her parents for encouraging her to be color-blind:

My Afghan identity is inextricable from me — it makes me whole. This is what my family didn’t realize when they assured me that they didn’t see my Brownness [sic] and that they only saw me. What none of them understood was that I am my brownness.

An Indian (dot, not feather) dancer who had a three-second spot on a Beyoncé video has proclaimed before God and man that “Loving blackness taught me to love my brownness.” And another dot-not-feather woman has shouted from the mountaintop that “putting brownness against a brown background compelled me to dig deeper.”

I hope she digs so deep that she loses her Internet connection.

The Los Angeles Times did a puff piece on a Latina who has cranked out “a decade of art that unapologetically celebrates brownness.”

Although these are the same people that argue against “racial essentialism,” when they talk about blackness, Jewishness, and (gag) brownness, it’s as if they’re describing the very essence of these people’s souls.

It’s only when we get to “whiteness” that we hear that whiteness doesn’t really exist, has no essence, and is just a way for white people to exploit and murder nonwhites.

I’ve mentioned previously that nonwhites who do not absolutely bask in their nonwhiteness are accused of practicing “multiracial whiteness.”

A black alleged scholar — I’m not alleging that he’s black, only implying that his scholarship is dubious — says he “wants to save the classics from whiteness,” a malignancy which resides “in the very marrow of classics.”

Skateboarding — which was once seen as snow-white as ice hockey and square dancing — now desperately “seeks to flip its image of whiteness.”

USA Today took pains to explain that when Rev. Raphael Warnock — now a US Senator from Georgia — declared from his pulpit that “America needs to repent for its worship of whiteness,” there was absolutely nothing bigoted about his statement. They even framed the article as a “fact check,” as if bigotry was something you could quantify.

Whiteness is constantly framed as a fallacy, a fraud, a problem, and something that needs to be investigated and broken down. It’s even depicted as a “chronic” condition — which implies it is a disease.

In case you haven’t been paying attention, whiteness is a cancer, and the persistent celebration of nonwhiteness is the chemotherapy.

When, oh when, will those tulips start to bloom again?