The Night the Whites Lost Clout in Georgia 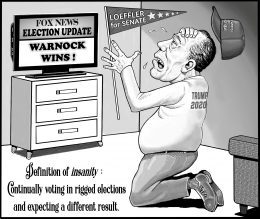 It’s Wednesday afternoon as I type this, and alleged Trump supporters — at least one of whom was toting a Confederate flag — have invaded the US Capitol building while Congress was certifying the electoral vote from 2020’s presidential election.

It’s a bittersweet image, seeing as how last night, the state of Georgia — once known as the “Heart of the Confederacy” — elected two Democrats to the US Senate, officially giving both parties 50 Senators each and the tiebreaking vote to Kamala Harris. This means that Joe Biden will have far more power than he did only a day ago.

Virginia was also known as the “Heart of the Confederacy.” Along with Georgia, Virginia was the only former Confederate state to vote for Biden in November — assuming anyone can trust vote tallies anymore.

Growing up on the outskirts of Philly, my earliest memory of the American South was when I was around five years old and my older brother took me to a trilogy of splatter films by exploitation director Herschell Gordon Lewis. The one I remember most vividly was Two Thousand Maniacs!, which told the tale of a mythical Southern town known as Pleasant Valley. A century after Yankee soldiers killed every last citizen of Pleasant Valley in the Civil War, its citizens resurrected themselves, captured six modern Yankees who were headed South on vacation, and brutally tortured every last one of them to death in vividly creative ways.

One of the most memorable murders involved tying a Yankee woman to a platform beneath “Teetering Rock” — a giant boulder that fell down and crushed her skull after one of the yokels finally hit a target with a baseball.

For decades now, demographics have been Georgia’s Teetering Rock. Statewide elections have been razor-thin, with the dividing line sharply drawn between multiculturally inclined Atlanta-area Democrats and the rest of the state, which is almost entirely comprised of rural white Republicans.

Last night, the boulder may have permanently teetered in favor of nonwhites.

Although I should be, I am not ashamed to announce that at age 12, I owned a copy of Vicki Lawrence’s song “The Night the Lights Went Out in Georgia,” a steamy Southern Gothic tale of infidelity and murder and vigilante justice in a state where you can’t “trust your soul to no backwoods Southern lawyer.”

Back then — aided considerably by 1972’s film Deliverance — Georgia seemed like it was located in another country than Pennsylvania was, and in many crucial ways, it was.

Nowadays, the catastrophe of dimwitted urban planning known as Atlanta might as well be Chicago, only with warmer winters. It’s stuffed with angry blacks and compliant white enablers.

“The Night the Lights Went Out in Georgia” hit #1 on the Billboard charts in 1973. A year later, Atlanta would vote in its first black mayor — and it’s had nothing but black mayors since.

Before the white man’s arrival, what is now the State of Georgia was home to indigenous red tribes whose biggest accomplishment was equivalent to that of ants — they built dirt mounds. Prior to the 1830s, Georgia was home of most of the Cherokee who were relocated West during the Trail of Tears.

Around the year 1900, Georgia was almost half-black. It shed many of its black residents during the Great Migration northward. But today it’s still nearly one-third black. Percentage-wise, it’s the nation’s blackest state behind Alabama and Mississippi. In raw numbers, it has more black people than all states besides New York and Florida.

From Reconstruction all the way to 1964 — when it gave the nod to Barry Goldwater — Georgia voted for the Democratic presidential candidate. In 1968, it voted for independent candidate George Wallace along with four other states in the Deep South. With the exception of 1992, when it voted for Democratic Southern boy Bill Clinton, Georgia voted for the Republican candidate in every election from 1972 until it leaned ever so slightly for Biden in November — again, assuming one can trust the vote-counters.

Despite all the lies you hear about how Richard Nixon’s “Southern Strategy” marked the only time since the Civil War that national politicians made direct racial appeals to its constituents, the truth is that Nixon’s planners ceded the entire American South to George Wallace in 1968.

The truth of the matter is that both major American parties make direct appeals to blacks; Democrats are simply much better at the art than Republicans are. And as I’ve noted many times, there are no elected officials in America right now who even bother to mention white people unless it’s in disparaging terms.

I’ve been living in the Atlanta area for 13 years and have witnessed two mayoral races where a white candidate, Mary Norwood, received a plurality of votes during the first round. But since she was running against what seemed like a whole football team’s worth of black candidates each time, she failed to receive a majority and faced a runoff against the top-scoring black candidate. Because black Atlantans “vote black” just like blacks across the USA do, both times Norwood lost a one-on-one race to her black opponent in the runoff. As a result, since 2008 we’ve had two black mayors with the bliggety-black names of Kasim Reed and Keisha Lance-Bottoms.

Although the sprawling ATL metro area occupies only about one-sixth of Georgia’s land, it is home to three-fifths of the state’s ten million residents. And now, like most states that are dominated by a single metropolis, Atlanta dictates the state’s politics and culture, regardless of how all the rural yahoos may feel about it.

Georgia was once the setting for The Dukes of Hazzard. Now it’s where all the Tyler Perry movies are made.

When I first arrived in Atlanta in 2007, I felt as if I’d accidentally stepped off a plane somewhere in Nigeria. Even though I’d lived in Philly, New York City, and LA, those places at least offered the occasional respite from the Endless Chocolate Ocean. But you can’t spit in Atlanta without hitting a black person.

Like those two razor-thin mayoral elections, Tuesday night’s Senate runoffs were forced by the fact that no one got a majority in November. And just like the mayoral elections, I felt that none of the candidates even pretended to represent my interests. And just like so many elections these days, the Democrats made everything aggressively racial, while the Republicans grimaced and tried to play nice.

Incumbent Republicans David Perdue and Kelly Loeffler are about as white as you’re allowed to be these days without facing jail time for laying the whiteness on too thick. Both are avid Trump supporters. And like all Republicans these days, they pretend as if white people don’t even exist. Mega-millionaire Loeffler is co-owner of Atlanta’s WNBA team and faced a PR nightmare when she openly spoke against Black Lives Matter.

Apparently blind to the fact that many of his supporters are poor, Perdue has bragged that he’s spent most of his career outsourcing jobs overseas. And when it comes to enabling ethnocentrism, I’m only aware of David Perdue belching his aggressive support of Zionism. This didn’t stop his opponent on Tuesday, the aggressively and impenitently Jewish Jon Ossoff, of calling Perdue “a virulent and unrepentant anti-Semite.” Ossoff also accused Kelly Loeffler of “campaigning with a Klansman,” which as far as I can tell means “posing for one photo with someone she had no idea was a former Klansman.”

Mind you, Ossoff served for five years as an aide to the mentally impaired black Georgia Congressman Hank Johnson, who thinks that islands can capsize if you send too many soldiers there and hears Klan dog whistles in his sleep.

Both Ossoff and his Democratic co-winner on Tuesday, the Reverend Raphael Warnock, realize that identity politics are welcome in modern America so long as white identity is demonized and all other forms of racial identitarianism are lionized as “social justice.”

Warnock, a dead ringer for JB Smoove of Curb Your Enthusiasm fame, is the senior pastor of Ebenezer Baptist Church in downtown Atlanta. You may have heard of it — some fella who went by the name of Martin Luther King, Jr. was pastor there when he got shot dead in 1968. Warnock has never for a moment ceased making things racial. He has referred to Reverend Jeremiah Wright’s “God Damn America” speech as “Christian preaching at its best.” Warnock has also referred to black liberation theologist Dr. James Cone as his “mentor.”

Here are some compiled nuggets from Dr. Cone’s preachifyin’:

If God is white, kill God….There will be no peace in America until white people begin to hate their whiteness, asking from the depths of their being: ‘How can we become black?’…With the assurance that God is on our side, we can begin to make ready for the inevitable — the decisive encounter between white and black existence. White appeals to ‘wait and talk it over’ are irrelevant when children are dying and men and women are being tortured. We will not let whitey cool this one with his pious love ethic but will seek to enhance our hostility, bringing it to its full manifestation….We have reached our limit of tolerance, and if it means death with dignity or life with humiliation, we will choose the former. And if that is the choice, we will take some honkies with us.

Why, it all makes a transplanted Yankee such as me nostalgic for the likes of Lester Maddox, who was born with the perfect name for an angry white segregationist. Rather than serve black patrons at his Atlanta restaurant in the mid-1960s, Maddox shut the whole operation down — a move which destroyed his popularity with the Georgia electorate so thoroughly that they elected him the state’s governor only two years later. While Governor of Georgia, Maddox famously walked out on Dick Cavett and football player Jim Brown on a 1970 TV appearance, leading Jewish songwriter Randy Newman to mock him in his song “Rednecks.”

Perhaps the most extreme white would-be Georgia politician since the Civil Rights era was J.B. Stoner, who said Hitler was “too moderate,” called Jews “vipers of hell,” and said that “being a Jew [should] be a crime punishable by death.” Regarding blacks, Stoner said:

Stoner was suspected in several terrorist bombings of black churches and synagogues and was convicted in 1980 of bombing the Bethel Baptist Church in Birmingham, AL in 1958. After serving a little over three years for the bombing, Stoner was released and continued to campaign for the US Senate as an N-bomb-dropping Dixiecrat.

Where have all the George Wallaces, Lester Maddoxes, and J. B. Stoners gone? Will such types ever come back?

Georgia’s perma-flip from red to blue and from white to black should prove to the naysayers that all politics are identity politics. Many white people are finally starting to realize this. But is there a single white politician in America who is willing to articulate it?