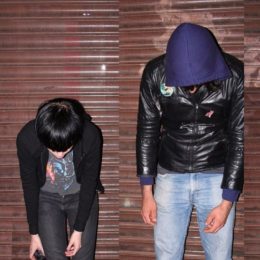 Crystal Castles is a Canadian band, initially consisting of singer Alice Glass and producer Ethan Kath. The two met each other because of their mutual connections in the large and prolific Toronto music scene, and collaborated on one track, the chaotic “Alice Practice,” as a mere experiment. The two never intended to form a full-time group with each other, only occasionally collaborating and mostly focusing on their own projects. “Alice Practice” found its way onto Myspace, where it became a slow-burner viral hit; the sudden success of “Practice” motivated the pair to record and release a full-length album together. That became the self-titled Crystal Castles — a name they cribbed from the cheesy 80s cartoon, She-Ra — which became a massively successful crossover hit that dominated fledgling internet subcultures in North America and Europe following its release in 2008.

Crystal Castles is one of those 2000s cultural touchstones that can bring a flood of memories back to any person who lived through the band’s heydays. It is a pillar of nostalgia-core for millennials and some older Zoomers; one of those records that remains timeless in its sounds, yet wholly a product of its era. Castles contains tracks that do not feel out of place on the dance floor today, and indeed, the more techno-oriented cuts off the album enjoy sustained popularity in clubs and private gatherings both for their innate replay value and throwback status.

Castles is also an album that is unmistakably young, and unmistakably white, in its sounds and aesthetics. The group draws from witch house, techno, garage rock, synthpop, video game music, industrial, and glitchcore with equal force and abandon, crafting tracks that walk the line between hypnotic and upsetting, sometimes stepping over to one side. Not once for the whole duration of Castles do the duo attempt to shoehorn in sounds that do not belong in the context of the record, which is part of what lends the album its staying power and consistent tracklist.

On the more abrasive side of things, there are the glitchy, violent storms of “xxzxcuzx me,” “Love and Caring,” or “Alice Practice” itself, songs that are inspired by the punk ethos in spirit, but resemble glittery industrial in practice. Tracks more clearly influenced by an ambient style guide and a dancefloor foundation include the famous “Crimewave,” “Magic Spells,” or this reviewer’s personal favorite, “Vanished.” In the middle lie songs that defy useful definition — “Knights,” “Air War,” or “Good Time,” et al — that showcase the duo’s more experimental and musically irreverent side.

All told, these tracks still form a cohesive whole. Despite the stark differences between many of the record’s sounds and influences, Glass and Kath approached the album’s tracklist almost as though they were curators or DJs; every track seems to flow into the other, and in a logical fashion. Perhaps it is not in spite of, but because of, the album’s diverse palette of sounds that the whole thing seems like a complete record. Even though there are significant detours from the regular composition style that marks most typical pop music, the record is unified by its uniform stylistic philosophy. Glass and Kath set out to plunder the past for its forgotten gems, and they more than succeeded in doing so.

The genres represented within Castles almost never approach those that were en vogue in the 2000s; a far cry from Britney Spears or boy bands, Castles draws upon inarguably underground movements. Techno had long fallen out of fashion in the mid-2000s, chiptune music was the domain of nerds and neckbeards, and industrial was always marked by social subversiveness and musical inaccessibility. Castles is an album that rests upon the pillars of maligned nostalgia, a longing for the aesthetics of yesterday interpolated with the cutting-edge of contemporary art. That is its appeal — it is timeless for its datedness.

There is just a small problem with nostalgia, though.

Nostalgia is powerful. It always has been. There is the more generic kind of nostalgia, in which one is afforded the opportunity to gaze back upon one’s youth without a critical eye, to revel in it without any associated torments. This yields us such institutions as classic rock stations, mall goth aesthetics, and various other throwback touchstones that define the presentation of youth and adults alike to this very day. It is an easy feeling to indulge in; looking back upon the high points of the era in which one felt freer, more fulfilled, more imbued with thumos can fill a man with a warmth that little of the modern age has to offer.

This feeling of nostalgia is felt especially among the New Right both for its generic appeal and for the sentiments that logically follow from such a thing, knowing what we know. We long for the days in which the places we were born in, visited, and loved were host to white people. We long for the days when our media was mostly shaped by and represented white people. We long for the days when politics in art was almost unheard of but from the mouths of people we cast into the category of “lovable eccentrics.” Compared to the blatant dystopia we live in today, the years of two decades prior seem like absolute bliss.

There are also few white-dominated subcultures left that aren’t either subjected to some kind of mob reckoning or poisoned by forced integration. Take goths, for example. I’m not sure why a black person would ever want to be a goth, or why goths would have to appease them, but it’s happened. They don’t even do it right! The neofolk scene is viewed as increasingly edgy to take part in, despite many Leftists still peeping over the concert walls to indulge in what amounts to fascist porn to them. Absent our own implicitly white aesthetic ingroups, especially those with social acceptance, the appeal of those that existed in the past is undeniable. The resurgence of decidedly Castles-like music termed “hyperpop” by clueless music critics, purveyed by groups such as 100 gecs, Charli XCX, or Kero Kero Bonito, is testament to that. Implicitly white subcultures can’t exist without some sort of brain-melting propaganda bundled in, however. Laura Les of 100 gecs is transgender. Charli has been spamming about Black Lives Matter for the past month. KKB has done the same. As unfortunate as this is, these developments did not emerge out of a vacuum.

The societies we remember from the 2000s were still on the path toward the sick world that we see today. The events that precede the status quo occurred in the 1700s, the 1800s, the early part of the 1900s. There was no single moment in the collective recent memory, which for those alive today reaches back to the 1930s, that precipitated the present world order. These machinations were in the works for all of the time that we have been alive. A desire to return to a now-idealized — for lack of any better-known alternatives — 2000s suburban dream with its Crystal Castles and endless consumerism is the desire of one who wishes to freeze history in place. The American experiment of segregating races in space within the same nation is not one that necessarily ended in the 1960s. It merely became a matter of unsustainable use of urban space, credit, and somewhat ghettoized channels of culture. We look back upon our childhood, adolescence, and young adulthood fondly because we were still afforded the option of a veil. We could pretend that everything was alright because such a thing was expedient for those in charge. If the same Black Lives Matter nonsense was tried in 2005, nobody would have taken such a thing seriously, because we were still given a superficial impression that such rifts in society did not exist.

These rifts did exist, however, and to look back upon an era in which we could pretend that they did not as an example of what our societies should look like is a textbook example of failing to read and understand the data. The North American lifestyle, and even its underground aesthetics, were the consequence of tactical consolation measures for white society to continue existing mostly unperturbed in the face of the problems that it would be forced to reckon with in just a decade. Perhaps we would be faring better now if we had known how bad things actually were then.

Even the nostalgic Platonic ideal eventually disintegrates under its own weight. The logical conclusion of that decade’s Zeitgeist, as innocuous as it seems now, is what we live with today. Alice Glass left Crystal Castles in 2014, and went on to accuse Ethan Kath of physical and sexual abuse in 2017. You hate to see it.

Absent our modern critical lense, nostalgia is a dangerous sentiment to channel in the discourse of the Right for the simple reason that what we remember did, in fact, lead to what we know today. This is not an indictment of nostalgia in the personal sense, as such a thing is invariably a part of the human experience; but to fashion one’s rhetoric upon promises of a return to an idealized heyday is to mislead those without context. Our situation cannot be fixed with a sort of popular conservatism. The New Right is not the social movement of delivery pizza, Myspace, and GameCube. We must strive toward greater things, and this will mean shedding parts of our past we may hold dear.

Crystal Castles will always be one of my favorite albums, but it’s sometimes painful to listen to. It would have been possible to discuss its merits and weaknesses without this gloomy disclaimer hanging over the top, but to do so would be dishonest about what makes this record so uniquely appealing. Above all, Crystal Castles makes me desperately wish to go back. I just know that I cannot.

Despite all that, I don’t cry because it’s over. I smile because it happened.