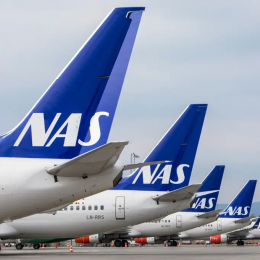 Flag-carrying Scandinavian Airlines, commonly known by their initials SAS, released a short video advertisement on YouTube this Monday. It was entitled: “What is truly Scandinavian?” Well, if you ask SAS, nothing. In just under three minutes, we’re told that the culture of the North was simply pilfered from the rest of the world; it’s both a gross misunderstanding of how world history works and a transparent attack on the soul of Scandinavia’s heritage and people. It received quite a bit of backlash online; SAS took the video down in under 24 hours after it received over 13,000 dislikes.

SAS then followed the standard operating procedure for instances like this. First, they tried to memory-hole the event entirely, deleting the YouTube video and ignoring any social media buzz that it had generated. In a prime example of the Streisand effect, this only made things worse. The ad in question has been reuploaded to YouTube, Bitchute, Twitter, and countless other platforms. People aren’t letting SAS get away with this. They’re also having a field day with the ad’s goldmine of exploitable material at the same time.

When simply ignoring the problem failed to work, SAS and Swedish media then moved on to the next weapon in their arsenal: Deflection. Not just any kind of deflection, mind you, but the most cliched kind possible: SAS and the media claimed that the backlash against their video was made possible by clandestine Russian influence and a coordinated network of Internet Nazis.

Aftonbladet, or The Evening News, cited the “work” of so-called researcher Mathias Cederholm, an employee of the “fake-news” watchdog company Allefonti, based in Malmö. (Article in Swedish.) Cederholm claims that the video only began to receive a large number of negative comments and reactions after it was shared by two Twitter accounts with links to an international network of right-wing populism. Cederholm also notes the video was reported on by Sputnik, implying there is some kind of clandestine Russian influence on how quickly the news spread. (Hey, I’ve heard this one before!) In other words, Cederholm claims that people didn’t actually dislike this video. It was just shared by a bunch of big, bad racists who ran a coordinated smear campaign against it.

There is a phrase for this kind of speculation. It’s called “conspiracy theorism.”

Instances like this are a great example of how the news media delegitimizes our interests. “Our” interests, in two senses — one, our interests as white people generally — and two, our interests as racially-conscious white people. Cederholm and Aftonbladet are crying “fake news,” implying that outrage of any kind against this video was the result of a disinformation campaign. He also dismisses the anger of “real” people sharing the article as a consequence of failing to check one’s sources. Such criteria make it very easy to propagandize. All you have to do is get some Boomer “researcher” to show you a graph of retweets, say something about Russia, and voila; your detractors either do not exist, or their concerns are invalid.

SAS itself had an interesting take on the issue:

When we look at the pattern and the number of reactions to our film, there is reason to suspect [there was] an attack [on our ad] and that our campaign has been kidnapped. We do not want to risk becoming a platform for someone else’s values, which we do not stand for. Therefore, we have removed the film from our channels and are now discussing the next step.

SAS is refusing to even acknowledge that their video was tone-deaf at best, and genocidal at worst. Rather, they’re more concerned that their ad campaign has been “hijacked” by radicals to spread propaganda, on the basis that subjects like that of their ad constitute an easy target for populist rhetoric.

The video’s claim that “nothing” is truly Scandinavian has sparked some humorous responses. For one, there’s a request for SAS to change their name to NAS — “Nothing Airlines” — and a treasure trove of meme content spreading throughout twitter both in SAS’ mentions and in the hashtag #SASGate.

There is, of course, a silver lining to all of this. This blatant anti-white propaganda is being named for what it is, very publicly; and SAS’ only defender is the mainstream news media that people are quickly growing to distrust. The mask was allowed to slip just a little too far.

In many ways, this ad campaign — and the spurious attempt at deflection that followed — is the best advertisement for our cause we could ever ask for. The combination of a hateful, culturally-erasing video and a media follow-up that makes both Swedish media and SAS look like spineless quacks leaves our people, literature, and aims looking downright friendly and sensible.