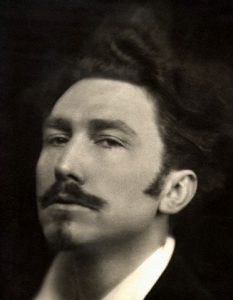 The following is the text of a talk given in London on May 27, 2018 at The Poet at War, an event convened by Vortex Londinium.

“We want an European religion. Christianity is verminous with semitic infections. What we really believe is the pre-Christian element which Christianity has not stamped out . . .”[1]

“If a race NEGLECTS to create its own gods, it gets the bump.”[2]

“The glory of the polytheistic anschauung is that it never asserted a single and obligatory path for everyone. It never caused the assertion that everyone was fit for initiation and it never caused an attempt to force people into a path alien to their sensibilities.

Paganism never feared knowledge. It feared ignorance, and under a flood of ignorance it was driven out of its temples.”[3]

Pound is a forest and one is in need of principles by which to navigate him, otherwise one is apt to lose sight of the wood for the trees, as we say in English. What I shall call Pound’s paganism can, I submit, offer one of the more direct routes into the man and his work, and in particular, into the heart of his most difficult: The Cantos.

At the same time, in the opposite direction, his poetry and prose can bring one to a better understanding of this part of our heritage and its potentialities, and here I intend no narrowly partisan point. By paganism I mean a central stream in European civilization, something that has participated in the formation of Christianity just as much as offering alternative visions of life. To give one example, the theologically fundamental doctrine of the Trinity is arguably a modified form of the Neo-Platonic triad of the One, Intellect, and Soul, in which the latter two emanate from the One and yet both are equivalent to it and yet not equivalent to it. St. Augustine in his Confessions confirms that he and other Christian intellectuals believed thus that the Neo-Platonists had already had an awareness of the persons of the Trinity.

Pound was pagan in three respects. First, he accepted as true ideas from the pre- and non-Christian philosophers. One finds a Neo-Platonic orientation of mind, in the foreground or background, from the very first poem in his first published anthology, “Grace Before Song,” to the very last words of the final Canto, “Canto CXVI”:

To confess wrong without losing rightness:
Charity I have had sometimes,
I cannot make it flow thru.
A little light, like a rushlight
to lead back to splendour.[4]

It is the idea of light as the symbol for a higher form of reality, of a more real reality, which all things may draw closer towards and so perfect themselves – it is this idea that unites how he speaks of the ethical precepts of Confucius, the financial theories of Major Douglas, the politics of John Adams, and the poetry of Cavalcanti, all aids towards the perfected man and the perfected society.

Lord God of heaven that with mercy dight
Th’alternate prayer wheel of the night and light
Eternal hath to thee, and in whose sight
Our days as rain drops in the sea surge fall,

As bright white drops upon a leaden sea
Grant so my songs to this grey folk may be:

As drops that dream and gleam and falling catch the sun
Evan’scent mirrors every opal one
Of such his splendor as their compass is,
So, bold My Songs, seek ye such death as this.[5]

The second and obvious respect in which Pound was pagan was that he accepted as valid indigenous images, names, and myths, by which Deity has revealed Itself to the Europeans. He claimed that the only safe guides in religion were Ovid’s Metamorphoses and the writings of Confucius.[6]

Which brings one to the third respect. He was pagan in his ethics, in the sense that he sought precepts that had arisen through tradition, were enshrined in custom, and were implicit in the natural order and man’s place within it. When he was captured by the partisans after the war and assumed he was about to face execution, it was the Analects of Confucius that he took with him, which he considered a better guide to moral behavior than the Bible: “The unshakable wisdom of Confucius . . . in comparison with which Christianity is a fad.”[7]

Cut to London in the years following 1908, when Pound settled here. With the rise of science and biblical scholarship precipitating a crisis of faith in the mid-nineteenth century, some of the space hitherto occupied by the established denominations began to be filled by mysticism, occultism, and philosophies drawn from earlier times or from other parts of the world; and this was nowhere more evident than within the artistic circles in which Pound would move. The Theosophical Society was founded by Madame Blavatsky in 1875, and one of the emblematic texts of the aesthetic movement, Walter Pater’s work of fiction, Marius the Epicurean, appeared ten years later, providing a fully fleshed-out account of how non-Christian, Classical concepts of spirituality and the Good might be just as valid a way to live well as the prevailing religious norms.

The major source which fed Pound’s development as a religious thinker was, as has been indicated, Neo-Platonism, which is simply the continuation of Plato’s ideas, namely their elaboration and exegesis, principally through Plotinus but also through a host of others, including Marsilio Ficino and Pico della Mirandola in Italy, and later through the translations of the eighteenth-century English Neo-Platonist Thomas Taylor, whose books were read by and influenced poets such as Blake, Shelley, and Yeats.

What Pound found within Neo-Platonism was:

It seems Pound was congenitally disposed to such ideas. When interviewed during his stay in St. Elizabeth’s Hospital after his return to America in 1946, he said he had been under the influence of mysticism between the ages of 16 to 24.[10] Later in his life, he wrote two refreshingly precise and disciplined statements of his own philosophy: “Religio, or the Child’s Guide to Knowledge (1918) and “Axiomata” (1923). The first is a catechism, a series of simple questions and answers which enunciates a pagan theology as well as any other text of such brevity of which I am aware.

He was drawn to Plotinus because Plotinus defended the value of worldly sensations and attacked their rejection by the Gnostics, who thought physicality evil in some sense. He was drawn to the idea in Plotinus that the beauty of this world is the manifestation of a celestial beauty, which we may not be able to grasp but which is yet a glimpse of a paradise that imparts to us, within a limited time, an unlimited joy.

But unlike Plotinus, who thought that this glimpse into the world of ideal forms was but the penultimate stage in the union with the One, a union with the absolute, an entity without parts or qualities, Pound seemed to believe that this was an unwarranted assumption, which one’s highest experiences neither legitimated nor needed. His type of paganism was without dogmatism or unnecessary abstraction: “To replace the marble Goddess on Her pedestal at Terracina is worth more than any metaphysical argument.”[11]

The vast, sprawling, expansive sequence of poems called The Cantos is Pound’s attempt to fashion a work that embraced all things that seemed relevant, all things that needed to be said. It makes use of twenty-five languages – twenty-six if one includes musical notation. It draws on Dante’s Divine Comedy in the progression from the dark depths to the upper regions; Ovid’s Metamorphoses in the treatment of impermanence and change, and of the human and the mythic; and Homer’s Odyssey, in the hero’s endeavor to succeed over obstacles and achieve victory, and victory not merely in worldly terms.

Plotinus regarded Homer’s Odyssey as a metaphor for the journey of the individual soul to return home into the Great Soul of the absolute, and this became for Pound almost a foundational myth for civilization. The Cantos begins therefore with an account of Odysseus making landfall and offering sacrifice to the gods. Paganism, in its Hellenic manifestation, he saw as the golden thread that ran overtly through the Classical era, covertly through the Middle Ages, and surfaced again in the Renaissance, indeed being implicit alongside the explicit Christianity of his favorite author, Dante Alighieri.

In the essay “Psychology and Troubadours” (1912), he posited a continuity of Classical paganism in the south of France:

Provence was less disturbed than the rest of Europe by invasion . . . if paganism survived anywhere, it would have been, unofficially, in the Langue d’Oc. That the spirit was, in Provence, Hellenic, is seen readily enough by anyone who will compare the Greek Anthology with the work of the Troubadours. They have, in some way, lost the names of the Gods, and remembered the names of lovers.[12]

One recognizes a person that one actually knows by sight, by who the person is, not because of the name. A person may be called by different names yet be the same person still. “Tradition inheres in the images of the Gods, and gets lost in dogmatic definitions . . . But the images of the Gods . . . move the soul to contemplation and preserve the tradition of the undivided light.”[13]

Before I close with a poem, I should like to put forward two conclusions.

First, with the insights into the Cantos offered by Neoplatonic paganism, one can put to one side some of the less inspiring critical readings – that it is a record of a lifetime’s reading, or an old man’s descent into confusion – and it becomes again the epic he intended it to be, the struggle of light against darkness, of heroes with themselves and with the world to reach a blessed place.

And second, with Pound’s veneration for the past and his appetite for the future, for making it new, as he put it, with his courage and capacity for friendship, with the range of his enthusiasms, and the range of what he was not satisfied with, he is an ideal figure to head any movement of European rebirth. And this poem, “Surgit Fama”[14] (“it rises to fame”), seems to be about that more than anything else. The first stanza depicts a stirring in the world, the coming of Korè who is Persephone, the returning and reborn Spring; in consort with Leuconoë, the girl to whom Horace addresses the famous injunction to seize the day, carpe diem.[15] In the second stanza, when the poet tries to render this into verse, he has to resist any superfluity, any unnecessary words that may be circulated as rumor or bent in their meaning, which he feels Hermes may tempt him to, and he addresses himself, exhorting himself to speak true. And in the final stanza that is what he does, when he says how in Delos, the island where it was said Apollo and Artemis were born, once again shall rites be enacted and the story continued.

There is a truce among the Gods,
Korè is seen in the North
Skirting the blue-gray sea
In gilded and russet mantle.
The corn has again its mother and she, Leuconoë,
That failed never women,
Fails not the earth now.

The tricksome Hermes is here;
He moves behind me
Eager to catch my words,
Eager to spread them with rumour;
To set upon them his change
Crafty and subtle;
To alter them to his purpose;
But do thou speak true, even to the letter:

[11] Ezra Pound, “A Visiting Card,” written in Italian and first published in Rome in 1942; the translation by John Drummond was first published by Peter Russell in 1952; Selected Prose, p. 290.

» Between the Heroic & the Immeasurable:
The Historical Background of Oswald Spengler’s Philosophy of Science