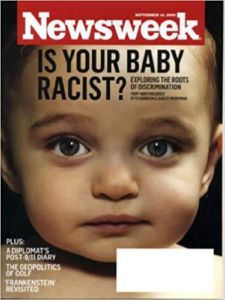 Whether or not you can find it in your heart to forgive George Yancy for being black, can we at least all agree that wearing a baseball cap with a business shirt and tie is unforgivable?

Like so many black writers — all of them, actually — Yancy’s bailiwick is his blackness. He loves his blackness and seems incapable of thinking about anything else. Every word he types is an exercise in picking black lint out of his black navel while he mindlessly gazes into the opaque abyss of his own blackness.

As one could have predicted, last week’s racially motivated massacre at a supermarket in Buffalo, New York has Yancy a-hootin’ and a-hollerin’ and actin’ a fool. It appears that the tragedy gave him a wicked case of the heebie-jeebies.

To Yancy, it wasn’t only Payton Gendron who killed those black people; it was all white people, even the “innocent” ones. I put the word “innocent” in quotes because Yancy did, too — he doesn’t think there’s such a thing as an innocent white person — they all killed those black Buffalo shoppers.

“‘Innocent’ White People Are Also Complicit in the Anti-Black Murders in Buffalo,” writes the racially apoplectic Negro scribe. The black people who got killed in the massacre, though? He calls them innocent, too — but with no quotation marks.

How, you dare ask, could all white people possibly be accessories to this crime? Yancy is eager to explain:

This is the stuff of real nightmares, the expression of white power. . . . I would retort that the stain that is on the soul of America is the stain of whiteness, the kind that reveals itself also in non-hateful forms and non-overt forms. . . . Hatred is not even a necessary requirement to keep whiteness as anti-Blackness [sic] in place. . . . I’m not only concerned about the “radicalization” of white people that occurs within xenophobic social media echo chambers. I’m also concerned about much more quotidian and ubiquitous white racist echo chambers — the ones that exist within white homes, white places of worship, predominantly white dorms, predominantly white schools, and within the context of white family dinner conversations. The toxicity of whiteness is bred within those everyday contexts where white life happens, where white people love each other, where they discuss the events of the day. . . . Hence, it is ordinary, “innocent” white citizens who need to rethink their whiteness and how it is complicit with structural anti-Blackness [sic].

As proof that we are still a steadfastly, stubbornly, stalwartly, and dickishly white supremacist nation, Yancy cites an unsubstantiated anecdote from a book about a three-year-old white girl at a day-care center sometime in the early 1990s who refused to sleep next to a four-year-old black girl because, and I quote, “Niggers are stinky.”

I won’t even address the question of whether they stink. I feel it would be undignified even to broach the topic.

But I will submit to the jury that if a grown-ass black man thinks that some isolated (and possibly apocryphal) anecdote from 30 years ago about some white toddler expressing olfactory displeasure at the mere notion of having to be within sniffing distance of a black girl serves as proof that every living white person in America shot up that Buffalo supermarket, then “white racism” is the least of that grown-ass black man’s problems.

Everyone should know by now that being the product of miscegenation causes profound emotional and developmental problems for the hapless spawn of such illicit carnal unions. Cher sang about the pain of being a half-breed. Porter Wagoner did Cher one better by singing about the profound agony of being “part white, part black, part red” in his immortal anti-race-mixing ode “George Leroy Chickashea.”

Melissa Riley is a single mom in Charlottesville, Virginia who says she’s part white and part red, but I’ve known a lot of people down South who claim Injun ancestry because apparently they think it’s a Get Out of Whiteness Free Card. She looks entirely white to me. At some point about 14 years ago, she mixed her precious bodily fluids with a black man who for one reason or another didn’t stick around to help raise her unnamed 13-year-old son, whom she says “looks Hawaiian.”

Riley says that until very recently, her Hawaiian-looking mulatto son was just a normal kid who loved video games and pranks and having fun and blending in and eating cereal and wearing sneakers. This all changed after the Henley Middle School adopted a new “anti-racist curriculum” that essentially defined racism as “being white.” Riley claims that Li’l Prince Pineapple Head will now refuse to do chores by claiming that it’s racist to even think of asking such a thing. What does she think he is — some kind of slave?

“He is changing,” Riley says. “If things don’t go his way or things seem unfair, he will now claim it’s racism. He never did that before. He now identifies as a black man, because that’s how the school told him he looks and who he is . . .”

Riley and her son are listed as plaintiffs in a lawsuit filed last December against the Albemarle County School Board alleging that any curriculum focusing on the unique evil of white people violates parental rights as well as the Virginia Constitution’s free-speech and equal-protection clauses.

I think it happens during education that certain people are made to feel uncomfortable about history and their place in it. Why is that a bad thing? Why are you worried about it? What is wrong with asking students to question themselves and the culture so they can learn something about it?

What’s with these passive-aggressive sadistic weirdos who act as if it’s a noble thing to make children feel uncomfortable? Besides, any honest review of history would likely make blacks feel far more uncomfortable than whites.

I have a sense, though, that for the rest of her living days, Melissa Riley’s mulatto son will do everything in his power to make his mammy feel uncomfortable.

Can you spot the primates in this picture? Although the correct answers are already checked, I would have had no problem spotting the primates. This seems like one of those identity-verification pages where they ask you to check off every picture that contains a bus or a traffic light before you’re allowed to proceed. There are four primates in that screen cap, and former President Barack Obama is one of them.

But an unnamed teacher at the Roeper School in Birmingham, Michigan has been placed on leave after asking students if they, too, were able to spot the primates. School officials are now desperately “trying to make sense of what happened.” The school was closed on Thursday, “and police were stationed outside the school because of threats made online.”

Why is this a big deal? Didn’t Charles Darwin claim that both he and Barack Obama were descended from monkeys? What kind of simian dimwit would get so upset at the insinuation that we’re all part of the same big primate family that they’d go apeshit and start threatening people? This world has gone completely bananas! They’re trying to make monkeys out of all of us.

I remember a time not so long ago when white people would ostracize other white people for choosing blacks as romantic partners. Some of the disparaging terms they’d use — “oil-driller,” “coal-burner,” “mudshark” — are so innately hateful that I can’t help but laugh every time I think of them.

But after decades of progress, millions of gallons of bloodshed, and trillions of dollars in government programs, now it’s blacks who shame other blacks for messin’ ’round with dirty-ass white skanks.

LeBron Raymone ‘Bronny’ James Jr. is the eldest son of basketball superstar LeBron James. He recently arrived at his high-school prom in a $326,000 Mercedes. His date was a 17-year-old blonde girl named Peyton Gelfuso. When Li’l LeBron posted prom photos to his Instagram account, he was greeted with what the Daily Mail called “vile racist abuse” — but as far as I can tell, all of it came from his co-ethnics. Comments included:

“That girl is whiter than white bruh”

“Lost another black king to a money hungry white girl”

“LeBron Raymone James Jr. I am so disappointed and dissatisfied with you [sic] prom date”

“Bruh no way you serious.”

“LeBron ain’t taught you ’bout off court game I see”

“Disappointed in you brotha”

On May 10, 2020, as the nation was in the throes of the first wave of COVID hysteria and on the cusp of the Summer of Floyd, a burly black 20-year-old COVID patient named Jadon Hayden was for some reason placed in a Michigan nursing home for the elderly while he recovered. In a grim and nauseating video that went viral, Hayden propped up a camera and proceeded to film himself repeatedly punching 75-year-old white military veteran Norman Bledsoe over the course of 89 seconds as shouted things such as, “See this bitch-ass nigger here?…Get off my bed, nigger! . . . [What the] fuck wrong with you?” The inauspiciously surnamed Bledsoe was visibly bleeding from the head. He died two months after the attack. It is unclear whether the beating was in any way related to Bledsoe’s death.

Hayden also filmed himself beating an elderly bedridden woman. As with the Bledsoe tape, Hayden proudly posted it online.

Although Hayden was never charged with so much as involuntary manslaughter charges for beating Bledsoe, he was charged with two counts of assault with intent to cause great bodily harm. But the charges were recently dropped, as it was determined that Hayden was not competent to stand trial.

How competent does one have to be to wear a suit, sit in a courtroom, and not open your rubbery yap? I’d reckon it doesn’t take nearly as much competence as it does to prop up a camera, beat the shit out of two separate people, and then post the footage online.

Hayden’s father Marty says that his son has been diagnosed with both autism and schizophrenia. Rather than blaming his son, he blames the system. “They dropped the ball,” he told a local TV station. “Why would they put my child in a nursing home? All around elderly people?”

’Tis a frightening thought, indeed — why would anyone endanger a musclebound, violent black 20-year-old by placing him in a hospice full of decrepit and dying white people?