Where Do We Go from Buffalo? 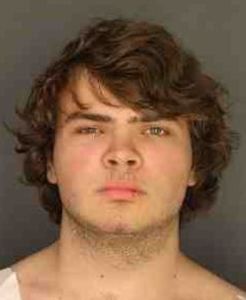 As springtime blooms and summer looms, as everyone tries to keep their brains from overheating after two-plus years of COVID theatrics, race riots, alleged insurrections, an emergent Third World War, and hundred-dollar hamburgers, the last thing we needed was another one of those once-in-a-blue-moon white-supremacist racial massacres.

Then again, depending on how conspiratorially minded you are, maybe this was perfect timing.

Ten dead bodies in a dingy, dismal, rundown black ghetto in Buffalo, New York. As I write this, 11 of the 13 shooting victims are confirmed to be black. The white gunman, 18-year-old Payton Gendron, livestreamed the massacre via a camera he’d mounted onto his helmet. Here’s a shooter’s-eye view of Gendron vaporizing a woman’s skull in the parking lot outside Top’s supermarket. Here’s a freeze-frame of a dead cashier.

Along the barrel of his rifle, Gendron had written — in white capital letters — things such as “NIGGER,” “HERE’S YOUR REPARATIONS,” the numeral “14,” and the misspelled name of Virginia Sorenson, one of the “Dancing Grannies” who was killed during the Waukesha Christmas Parade massacre last November. Roughly two days before the massacre, he’d posted a 180-page manifesto explaining why he felt it was necessary to slaughter a group of random blacks.

With all due respect to its very fine people, Buffalo is one of those places where you need to be reminded of its existence. It’s always struck me as a dismal little city with perhaps the worst winters in the country. Since my brain contains a Rolodex of racially-motivated hate crimes that I can access at will, the last instance of racial violence I recall from Buffalo was the 2009 beating of a 19-year-old white man by a trio of black teens who’d spotted him walking through the city’s far East Side with his black girlfriend. The beating left the victim, Brian Milligan, Jr., with bleeding on the brain and his jaw wired shut for nearly nine weeks.

According to Gendron’s manifesto, he purposely chose zip code 14208 in Buffalo because it “has the highest black percentage that is close enough to where I live.” Until his arrest on Saturday, Gendron lived with his parents in Conklin, New York, about 220 miles southeast of Buffalo. Through his research, he’d determined that Top’s supermarket on Jefferson Avenue in Buffalo “has 1 or 2 armed security guards with full size glocks [sic]” and that “IIIA armor will stop their ammunition.” He’d also used “Google and independent study” to determine that “4:00 PM on Friday is the most populated time at Top’s.”

So he was looking for the blackest area he could find and the best possible time to slaughter as many free-roaming blacks as he could pick off before either being killed or captured.

Yeah, this is not good.

Why he chose to arrive at Top’s at 2:30 PM on Saturday rather than 4 PM on Friday is unclear. Perhaps Mom and Dad wouldn’t let him borrow the car until Saturday morning.

There was only one security guard at Top’s on Saturday afternoon: a black man named Aaron Salter, Jr. He shot at Gendron, but the bullet did not pierce the white teen’s body armor. Gendron shot and killed Salter, though.

Gendron’s 180-page manifesto is a hodgepodge of personal testimonials, memes, and plagiarized material, much of it lifted word-for-word from his hero Brenton Tarrant’s The Great Replacement. If the name “Brenton Tarrant” doesn’t ring a bell, he’s the guy who in 2019 livestreamed his own massacre of 51 people at two mosques in Christchurch, New Zealand.

Much of Gendron’s manifesto reads like a scrapbook of a teenage kid who became “radicalized” after being exposed to far-Right material online. It’s a cornucopia of references to Sam Hyde, the Daily Stormer, Stonetoss, the Happy Merchant, and the (((triple parentheses))). Perhaps every single Star-of-David meme regarding media ownership ever created is all gathered together in one convenient PDF. There are the requisite stats about black crime and black IQ. There are ample quotes from the Talmud and graphs about Ashkenazi haplogroups.

And, in the same way that much of Norwegian spree killer Anders Behring Brievik’s 1,518-page manifesto took odd diversions into fruity fashion and health tips for aspirant Crusaders, more than half of Gendron’s 180-page manifesto deals with what he calls the “gear queer” side of things: It’s an exhaustive cataloging of all the firearms, headgear, and clothing a wannabe young white aspirant male racial mass murderer should use to commit the perfect racial mass murder.

I have a hunch that passages such as this won’t go over too well in the media:

The Jews are responsible for many problems that we in the western world face today. They will stop at nothing to ensure that they have full control over the goyim. The most common way the Jew does this is by weakening us with their propaganda. Since they mostly own mainstream media, this is easy. They will create infighting between our people and races so we are fighting each other rather than them. For example, currently the Jews are spreading ideas such as Critical Race Theory and white shame/guilt to brainwash Whites into hating themselves and their people. For our self-preservation, the Jews must be removed from our Western civilizations, in any way possible.

From every imaginable angle, this is worse than George Floyd’s death, which occurred almost exactly two years ago and led to months of nationwide rioting. There is no evidence that racial animus had anything to do with Floyd’s extremely convenient martyrdom.

But in this case, the evidence is overwhelming. I don’t know or care whether this was some sort of federal operation or merely another case of a lonely kid who claims to have been radicalized online. With any event of this sort, whether it’s 9/11 or 1/6, I find it much more useful to realize that no matter whether or not the feds planned or enabled this massacre, there is no doubt that they will exploit it. Legislation will be drafted to ban the mere expression of every last idea contained in Gendron’s manifesto, despite the fact that most of the material has nothing to do with direct calls for violence. This has been part of the propaganda war for generations now — because a violent person expressed a certain idea, forever shackle that idea to his act of violence and call for such ideas to be banned because, well, this guy held that idea and then got violent, so why are you complaining if you have nothing to hide, hmm?

Although summertime is official Riot Season, I don’t think the Buffalo Supermarket Race Massacre will lead to widespread rioting. With 2020’s Summer of Floyd and its focus on an imaginary epidemic of police violence against blacks, at least people could congregate to burn down police precincts and tear down statues; much of the mayhem in 2020 was aimed at the “system,” and many of the rioters were white.

But this was just some average white 18-year-old who came gunning for blacks. I sense that the payback for this massacre is more likely to resemble the aforementioned 2009 beating of Buffalo’s Brian Milligan, Jr., the 19-year-old white kid whose only crime was to court one of the city’s black girls. I have this queasy sense that this summer will bring an increased wave of black-on-white revenge beatings and murders along the lines of 2013’s “This is for Trayvon!” attacks.

If there is to be retaliatory violence for the Buffalo massacre this summer, I don’t think it will be against the “system.” It will be specifically against white people. This time it will be personal.