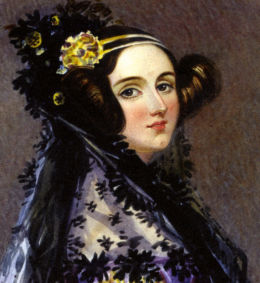 It is a near-universal claim that the world’s first computer programmer was Ada Lovelace. She is referred to as the “enchantress of numbers,” a mathematical genius, a visionary, and a fundamental contributor to the field of computing. The second Tuesday of October is “Ada Lovelace Day” — an event to celebrate women’s achievements in STEM. There is even a programming language named after her.

Ada Lovelace was not the first programmer, nor was she any kind of genius. She contributed almost nothing to the field of computing. Nearly all of the claims about her are wrong, and together they constitute the biggest lies told in the field of tech.

Charles Babbage originated the concept of mechanical programmable computers. He named his most ambitious design the “analytical engine.” Due to funding issues and the manufacturing limitations of the time, he didn’t get to build it, but his plans were sound. In 1833, Ada Lovelace met Babbage at a party. She was 17 and fascinated with Babbage’s work, so they became friends. As the daughter of Lord Byron, who was a sordid character of the time, Ada was born a celebrity. Attention, privilege, talent, and attractiveness came together to form very high self-regard. “The more I study, the more insatiable do I feel my genius for it to be,” she once said.[1]

In 1842, a paper was published in French by Luigi Menabrea based on a lecture Babbage had given in Turin two years prior, where he outlined the analytical engine’s operation and presented diagrams of some of the programs that could be run on it. Ada was approached to translate the paper into English and Babbage suggested that she add some notes of her own. She included Babbage’s sample programs from his Turin lecture and, by haranguing him for help, modified the program’s complexity:

I want to put in something about Bernouilli’s Numbers, in one of my Notes, as an example of how an implicit function may be worked out by the engine, without having been worked out by human head & hands first. Give me the necessary data and formulae.
— Letter from Ada to Babbage

That’s it. Ada Lovelace is called the first computer programmer because she translated a paper written by one man about another man’s work, using example programs written by that man from two years prior that she modified — with a lot of his help. All of the fuss about Ada being the first programmer is about this translated paper. The claims made about her range from establishment media puff-pieces which claim she was “the first programmer” to subtler claims that she was the “first published programmer,” or that she “wrote the first published program.”

It’s ridiculous to even consider that Charles Babbage, who conceived of the analytical engine long before a teenage Ada was told about it, would not know how to program it or would not have written his own programs for it. Claims that Ada “wrote” the program in the published paper are incorrect. The program was written by Babbage in Turin, two years before. Claims that she is the “first published programmer” or that the program is “hers” are more insidious. If you wrote a formula which you presented in a lecture, and it was then included in a paper that was translated by someone else, would the translator deserve the credit for the formula? I have a hard time thinking that if such a case were made before a modern peer-review board that they would conclude anything other than that the original author of a work is the one who deserves the credit. She was not even the first published programmer, because the program she published was not her work.

People believe what they want to believe, and computing has been a thorn in feminists’ sides for a long time now. Special attention is given to “women in tech” because it’s a cushy position for people of higher-than-normal abilities. It’s for the smart, the creative, the logically-minded, and so it must hurt quite a bit to see one’s own sex so underrepresented there. Since the game of modern feminism is about beating men, there is a great amount of cognitive dissonance in their minds over clearly lagging behind in many important fields. I could state it no better than they do themselves:

Reading through most accounts of history, we could be forgiven for assuming that women were not the warriors, the great thinkers nor the pioneering scientists who shaped and changed our world.

That men alone birthed art, churned out literature and fiercely challenged the status quo, while women functioned only within the domestic realm. But though the canon has perpetually erased the contribution of women and their work has been systematically discredited, devalued and derided, their light has doggedly broken through the cracks.

In short, the massive achievement of the male sex in creating so much of the modern world that serves us all is a con. Women are just as good — nay, even better, perhaps, as they were the first to do it in your male field. My failures aren’t my failures, it’s just the (literal) man keeping me down! It’s the baying call of the loser, and we see far too much of it in our world.

When it comes to controlling the minds of the masses, and therefore the fate of a nation, a myth or a narrative is more powerful than anything else. It supersedes all thought, and when implanted strongly enough, may control that person’s thinking for life. We all sometimes see the futility of disabusing people of their notions, and so we must simply wait out the clock until the mass of people who have a competing narrative outnumbers them.

Increasingly, I look at society as the result of a dominant collective who believes in a certain way “just because.” Slow and persistent subversion replaces those values with each generation, and in turn changes the nature of that society. People believe what they were taught, and very few think about why they believe the things they do. This results in a series of “what about”-isms, knee-jerk responses to points to disengage the mind from considering painful thoughts.

The prevalence of men in physics? What about Marie Curie?

American exceptionalism? What about slavery?

The moral quality of British culture? What about the Opium Wars?

What about the logical male mind, of the clear contribution of male logic to society in the form of technology? What about Ada Lovelace?

That is why they lie.