Is It Okay to Be White?: An Interview with Rémi Tremblay

Editor’s note: The following is the English-language version of an interview with Greg Johnson by Rémi Tremblay for the Quebecois nationalist publication Le Harfang.

Rémi Tremblay: It’s Okay to Be White was written and published before Black Lives Matter’s recent rise. Has it changed your perception?

Greg Johnson: BLM has been around since the Obama administration, but since the death of George Floyd, it has been much more vocal and destructive.

Recent events have not changed my views, just confirmed my conviction that blacks and whites simply cannot live on equal footing in the same society. The races are just too different to get along. Different standards and ways of life seem natural to us. When we share the same system, blacks resent us for imposing white standards on them, and we resent them as a drag on civilized life. Thus we need our own societies. We have irreconcilable differences. Thus we need a racial divorce.

RT: Funnily, the phrase Black Lives Matter has gained consensus in mainstream society, while the meme “It’s Okay to Be White” is considered “hate speech.” Why?

GJ: That situation is a perfect reflection of the agenda of our ruling elite. Black Lives Matter claims that blacks and other non-whites are victims of white privilege and systemic racism. The truth is precisely the reverse. We live in a system in which blacks enjoy objective privileges at the expense of whites.

Yet when this message appears, local police and federal agencies are contacted, politicians and journalists foam in rage, and those who post the message are harassed by police, lose their jobs, and get expelled from colleges. That proves that we do not live in a system of white privilege, but the exact opposite. I discuss this in more detail in the title essay of It’s Okay to Be White.

RT: Furthermore, how did we get to the point where saying that “all lives matter” is a racist statement?

GJ: “All lives matter” is an assertion of racial equality. Racial egalitarianism is “racist” only in the tortured and tendentious sense of “racist” used today by the Left. The Left is erecting a system of non-white privilege. It defines as “racist” anything that gets in the way of that, including racial egalitarianism. 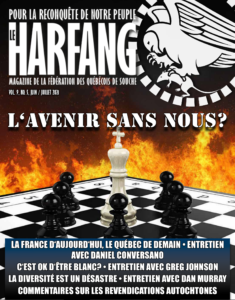 RT: The question of morality is central to your different writings. Why?

GJ: Morality is central to my writings because it is central to human motivations. (See “The Moral Factor,” Part 1, Part 2.) Human beings are willing to move heaven and earth or endure unspeakable suffering if they think it is the right thing to do. Moral arguments are central to the attack on whites. Therefore, moral counter-arguments are essential to our self-defense.

The political establishment today is united in its obeisance to the false moral absolute that identity politics is right for every group except the core founding populations of every white nation. Identity politics is even okay for white ethnic groups, as long as they are minorities. Thus we have the absurd situation in which Irish identity politics is perfectly okay in the United States and Canada, but not in Ireland. In Ireland, the Irish must define their identity as openness, inclusiveness, and multiculturalism, which basically means that their identity is to be open to replacement by Third World immigrants, who are somehow just as Irish as they are, but also pleasingly exotic and “diverse.” This is exactly how the Anglo core populations of the US and Canada must define themselves. White identity politics is only permissible when weaponized to undermine white nations, never when it preserves and promotes them. We need to reject this fake moral absolute.

False moral principles can only be ejected by true moral principles. This is why in my new book White Identity Politics, I spend a good deal of time arguing that white identity politics is not immoral by such standards as fairness, universalizability, self-actualization, and consequentialism.

RT: In It’s Okay to Be White, you advocate for ethnonationalism. What are your views on Quebec nationalism?

RT: Are populist and not explicitly nationalist parties, like Orbán’s and Trump’s, a trap or a way to foster our ideas?

GJ: Orbán’s Fidesz party is explicitly nationalist and populist. Trump’s Republican Party is neither nationalist nor populist. Trump was an outsider in his own party. Parties that lie closer to the mainstream are both opportunities and dangers. They offer us a way to inject our ideas into mainstream politics, but they also offer the establishment a way to coopt and canalize our ideas. That’s simply the nature of politics. We have to plan for it. But we were never going to change the world without opposition, and such threats from the center-Right are one of the things we have to plan for.

RT: Finally, what is the current state of the Alt-Right movement? After gaining a certain momentum a few years ago, it seems to have collapsed. Is this perception correct?

GJ: The Alt-Right is dead, but the Alt-Right was not our movement. It was just a name, just a “brand.” The brand became tarnished and has largely been dropped. However, the broader phenomenon of white identity politics — including White Nationalism — is very much alive and will continue to grow tremendously in the coming years, driven largely by the disastrous consequences of multiculturalism and globalization. I am very bullish on white identity politics, as I discuss in more detail in my new book White Identity Politics.

« A Response to Nathan Cofnas