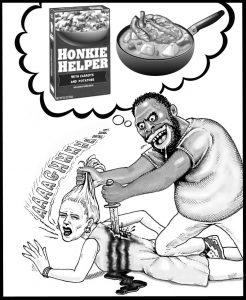 All the Fine Black Cannibals

As a young white child growing up in a 90%-white country where white characters dominated the media, it was easy for a green saplin’ such as myself to conclude that the only two races in America were Cowboys and Injuns. I was vaguely aware of the existence of black people, but you hardly ever saw them on TV or in the movies — and if you saw them at all, half of the time they were depicted as cannibals boiling their human prey in a gigantic cauldron.

Nowadays, black people are everywhere in media representations. You can’t see a TV ad or a movie or hear any song in the Billboard Top Ten that doesn’t have black people swarming all over it like ants on a vanilla ice-cream cone on a hot summer day.

But I miss the good old days of a thoroughly enjoyable black-cannibal story, so this week I’ll start off our round-robin of news stories with the grisly saga of Lawrence Paul Anderson, a black Oklahoman career criminal who police say recently confessed to murdering his female neighbor, then feeding her heart to his family members, two of whom he then killed for reasons that are yet unclear. He stabbed a third family member who survived. According to an agent with the Oklahoma State Bureau of Investigation, “He cooked the heart with potatoes to feed to his family to release the demons.”

One would assume that Oklahoma is a relatively hard-assed state when it comes to law and order — especially when it comes to black people, who comprise only 7% of the population. But their criminal-justice system was appallingly lenient with Anderson.

In 2006, he was sentenced to four years for possessing crack cocaine with intent to distribute and also assaulting and pointing a gun at his girlfriend. He was released in less than two years.

In 2012, he was sentenced to 15 years for selling crack near a school in the town of Chickasha, Oklahoma. He served just over five years.

In December 2017, he was slammed with a 20-year sentence for parole violations and new crimes. He was out again after serving about three years.

And then he murdered his neighbor, fed her heart to his relatives with a side of potatoes, then stabbed three of them, killing two — just to release the demons.

Black people. How can anyone not love them?

Few would deny that Barack Obama is the greatest closeted homosexual president this country will ever see. He also wrote a few autobiographies that allegedly dealt with being a black man in a racist America and how he kept hope alive despite being forced to grow up with rich and caring white people, but I’ve never read them and I’m pretty sure they suck.

Despite all his public confessions, it was only recently that Obama — who has suffered such a fall from grace that he now cohosts a podcast with Bruce Springsteen — revealed he once broke a person’s nose for calling him a “coon.”

Most of the news reports about this story spell it “c**n,” which leads obsessive types such as me to wonder why they preferred that spelling over “c*on” or “c***.”

Listen, when I was in school, I had a friend. We played basketball together. And one time we got into a fight and he called me a coon. Now first of all, ain’t no coons in Hawaii, right? It’s one of those things that — where he might not even known [sic] what a coon was — what he knew was, “I can hurt you by saying this.” I remember I popped him in the face and broke his nose. And we were in the locker room. And he said, “Why’d you do that?” And I explained to him — I said, “Don’t you ever call me something like that.”

I also doubt that this incident ever happened, but if it did, it’s notable that Obama didn’t identify the hate criminal by race. Odds are that it was some giant fat Pacific Islander who could crush that skinny mook between his thumb and forefinger, which is yet another reason to doubt that he ever broke someone’s nose for calling him a “***n.”

It’s clear who the groveling “c**n” is in that equation.

“Inside the Movement to Abolish Colonialist Bird Names” is easily the funniest headline of the past week, which is why I felt compelled to share it with you. Some white guy who looks like this and some white girl who looks like this have taken up the Guilty White Man’s Burden and are seeking to rid ornithology of any birds who have been unfairly saddled with the names of the racist, sexist, gay-bashing, Jew-immolating White Colonialists who may have discovered these birds and have had their names attached to them.

In the summer of 2020, agitators within this insipid new movement successfully petitioned the American Ornithological Society to rechristen a bird known as “McCown’s longspur” as the “thick-billed longspur” because the hapless and politically unaware bird was named after a Confederate general. According to an op-ed written by that white guy and that white girl — who refer to these racist bird names as “verbal statues”:

We cannot subjectively decide — especially if the adjudicators are White — that some names can be retained because they are associated with less abhorrent pasts than others. We must remove all eponymous names. The stench of colonialism has saturated each of its participants, and the honor inherent within their names must be revoked.

May the Bird of Paradise shit on these two for as long as they shall live.

In other news of wokeness bordering on a grand mal seizure from last week, both Dr. Seuss and The Simpsons were accused of racism and white supremacy.

Everyone knows it’s wrong to slur Jews, yet everyone seems to keep doing it, anyway. Coincidence? I think not, fair friends, and I also think we all know the reason why.

Fritz Berggren — now there’s a Nazi-sounding name if I ever heard one — is a mid-level diplomat in the US State Department who does somethin’-somethin’ involving visas and Afghanis. It sounds like the sort of job that’s so maddeningly dull, it’d drive even the sanest among us to write a blog called “Blood and Faith” that features articles with titles such as “Jews are Not God’s Chosen People. Judeo-Christian is Anti-Christ.”

Some golden nectar drippings from that entry:

Jewish ideas poison people. They murdered Jesus Christ. How then can they be God’s chosen? . . . Jesus Christ came to save the whole world from the Jews — the founders of the original Anti-Christ religion, they who are the seed of the Serpent, that brood of vipers. . . . Anti-Fa/BLM is not the resistance — they are the establishment. The resistance could be White men and Christians if we man up to it. . . . The revival of Christian nation-states is required for the advancement of Truth. There is no substitute for the public acclamation of Jesus Christ as the King and Lord of a nation.

Sounds like a fun guy. When contacted by activists posing as objective journalists, the State Department explained that they may not be able to discipline Ol’ Fritz if it can be proved he didn’t write any such entries while on company time.

Just as “Fritz Berggren” is a fantastic name for a Nazi, I also think “Bob Hoey” sounds like the type of guy who’d refer to a former Jewish official as a “kike” and then promptly resign from his membership of the Lowell School Committee in Massachusetts.

At this year’s CPAC convention in Orlando — CPAC is a group of Republicans who looooove Jews — critics noted that the high-tech stage design was clearly intended to resemble an Odal rune. When contacted about this accusation, organizer Matt Schlapp “vehemently” insisted that “CPAC proudly stands with our Jewish allies.”

Even though there are more Catholics on the Supreme Court than Jews, a Catholic school in Michigan recently apologized to all Jews everywhere for reposting a 1979 photo that appeared to depict students dressed in Klan robes and sieg-heiling but which, upon further inquiry, depicted students dressed in togas and throwing Roman salutes. Still, the Catholic school apologized to the Jews, which should clear up any confusion about which group is top and which is bottom.

NBC recently pulled an episode of a Canadian production called Nurses because one segment involves an Orthodox man and his father who object to a possible bone graft from a non-Jew: “A dead goyim leg?” asks the father. “From anyone? An Arab, a woman?”

The Simon Wiesenthal Center got involved and forced NBC to yank the episode because it was supposedly unkind toward Jews. As far as I can discern, the passage in question is far more unkind to goyim, but what do I know?

Black activists in North Carolina are now complaining that a new effort to make Holocaust instruction mandatory in schools focuses on Jews and not blacks, who as we all know because they never shut the fuck up about it, have endured centuries of torture and beating and forced labor just for the privilege of living in countries that make Africa look like the shithole it truly is.

» Grace Under Pressure: Life as a Thought Criminal