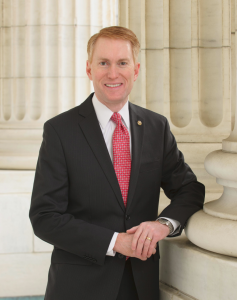 A video of the Capitol protests brought Oklahoma Senator James Lankford to tears last week. Lankford couldn’t bear to watch a clip of a Capitol Hill police officer being pushed into a door by Trump supporters. As the audio played during Donald Trump’s impeachment hearing, Lankford sobbed. Another Republican senator, Steve Daines of Montana, held his colleague’s arm and consoled him during the terrifying ordeal.

“It’s painful to see,” Lankford said afterward. “Who in God’s name thinks, ‘I’m going to show that I’m right by smashing into the Capitol’? Who would do that?”

This is the latest example of how pathetic our politicians are. Men have witnessed far worse things than a police officer being briefly stuck in a door. Men have seen their buddies blown to bits by artillery and survived devastating wounds to themselves. Even by violent video standards, the Capitol riot was relatively tame. There were far more brutal attacks seen at Black Lives Matter riots. Lankford didn’t shed any tears over business owners beaten by black mobs or Antifa.

The Oklahoman wasn’t alone in his distress. The New York Times reports that several senators cried at the footage shown before them. They left the hearing “visibly emotional.” “It tears at your heart and brings tears to your eyes. That was overwhelmingly distressing and emotional,” Senator Mitt Romney told reporters. Politico reports there is a “looming mental health crisis on Capitol Hill” with lawmakers and staffers claiming the protests traumatized them. The videos apparently “re-traumatized” them.

Even lawmakers who were far away from the mostly peaceful demonstrations claim PTSD. New York Representative Alexandria Ocasio-Cortez insists she was nearly murdered by the mob, though her office was blocks away from the Capitol. She shivered and cowered in another member’s office while people took selfies without permission in the Capitol. She recounted her horrifying tale in a viral video and demanded that everyone acknowledge her as a victim. She even said she “survived” a sexual assault in college. (Press X to doubt.) Conservatives were able to disprove her tale of barely escaping death, but she just doubled down on her victimhood and urged Big Tech to censor her accusers.

AOC later led a sob fest on the House floor where members were encouraged to share their ordeals. Michigan Representative Rashida Tlaib delivered the worst speech in this melodrama. She loudly sobbed into her mask as she thanked Allah for sparing her the horror of being in DC during the Capitol terror. “What happened on January 6, all I could do was thank Allah, but I wasn’t here. I felt overwhelming relief and I feel bad for Alexandria and so many of my colleagues that were here. But as I saw it I thought to myself ‘Thank God, I’m not there,’” she cried. AOC tried to comfort her during her tearful address.

All of this is behavior unbecoming of leaders. We look to our leaders to provide strength and resolve, not to cry at random riot videos. That’s a fundamental element of leadership: to be greater than the people you serve. The hoi polloi may be shocked by violence, but we expect — or at least should expect — our leaders to remain stoic in the face of dangers and challenges. But when faced with a rowdy protest, our leaders begged for a safe space. Lawmakers cowered under seats and hyperventilated as largely harmless Trump supporters walked around and took pictures.

Imagine these people in a genuinely dangerous situation.

During the Cold War, most of our legislators had served in the military, many of them in combat. Nearly 80% of Congress had a military record in the 70s. Some of these individuals would go on to run for president. Bob Dole, the 1996 Republican presidential nominee, nearly died from combat wounds suffered on the Italian front. He wasn’t a great representative of the historic American nation, but at least he wouldn’t sob over a police officer getting caught in a doorway. Despite the many issues with the Greatest Generation, they at least didn’t cry in public. The candidacy of Ed Muskie, the early favorite to win the Democratic nomination in 1972, was destroyed over him shedding tears during a disastrous speech.

Lankford, in contrast, hopes to keep his seat in 2022 on the basis of his tears. The Oklahoma senator may not have been genuinely shaken by the videos — he could just be acting to distance himself from the protests. He initially planned to challenge the election results on January 6, but the storming changed his mind. He’s conducted a groveling apology tour ever since.

He seems to think his political survival depends on looking like a complete pussy.

The good news is that this may further solidify the chances a primary challenger unseats him.

Unlike Ed Muskie, crying is a political advantage for modern politicians. AOC gained status through her meltdown and victimhood signaling. It’s not an original take, but it is true our society bases itself on a victimhood morality that prizes the supposedly oppressed.

January 6 continues to profoundly unmask the system. Elites were so traumatized by the event that they’ve dropped the pretense of representing the people. The government is their own fiefdom to enrich themselves and their friends. We’ve seen the worst side of these lawmakers — their cowardice, their shamelessness, their vindictiveness — and they demand we see them as our noble leaders.

“In American democracy, those of us who aspire and attain public office are nothing but the servants of the people,” impeachment manager Representative Jamie Rankin declared this week. “Nothing. Not the masters of the people. We have no kings here. We have no czars. Here, the people govern.”

It requires a lobotomy to believe the “people” govern. We’re instead governed by gutless vermin that sob at the first sign of trouble and flee at the sight of the people. It’s not a leadership class we should respect or admire. They’re just representatives of a hostile regime.