Why The Left Wants To Capitalize “White” 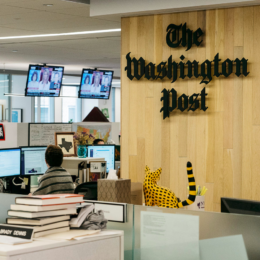 The Washington Post made a surprising announcement last week: it will now capitalize “White.” This seemingly minor change speaks volumes about the changing discourse on white identity and how whites fit in a multicultural America.

Many newspapers have changed their style guides to insist on the capitalization of Black, but most have refused to do the same for white. “White doesn’t represent a shared culture and history in the way Black does,” the New York Times argued in defense of its policy. The consensus declared black Americans are a people, but white Americans are not.

Washington Post disagreed, and said both are distinct ethnic groups.

Stories involving race show that White also represents a distinct cultural identity in the United States. In American history, many White Europeans who entered the country during times of mass migration were the targets of racial and ethnic discrimination. These diverse ethnicities were eventually assimilated into the collective group that has had its own cultural and historical impact on the nation. As such, White should be represented with a capital W.

Both Leftists and conservatives were outraged by this decision for the same reason: whites aren’t real and this encourages white nationalism.

All of this is so horrible for the country. The fact that our media are now reinflating racial divisions in order to backfill their wokeism is despicable. https://t.co/ZCJB5tt8qC

“White” is a caste; its only function is exclusion and privilege. It’s not an identity or a culture, and the only people who claim it as theirs are white nationalists. Many actual cultural identities—Ashkenazi Jewish, for one—tend to be subsumed in whiteness. https://t.co/nLBrTrsNWr

Wow. This is a pretty bad idea on the part of the @washingtonpost, but it's also the logical extension of a certain kind of thinking—the reification of race leading to racial division. It was only a matter of time https://t.co/lL8OAktAwd

By this logic, we should also capitalize the "R" in Racist.

Racists are definitely a "distinct cultural identity in the United States" who have a "cultural and historical impact on the nation." https://t.co/uoMFKZYWDT

Conservatives were arguably the loudest voices decrying the change, which is odd considering they’re supposed to defend the traditional America built by white culture. Some conservatives attempted to do a “flight from white” argument to deny whites exist. They either claimed they’re part of an ethnic group that was once supposedly not considered white (Italian/Irish/etc.) or that their ethnic group matters far more than their skin color. The problem is that many of these conservatives claiming the superiority of ethnicity over race (which doesn’t exist in their minds) are mutts who were raised far from any Little Italy.

The most hilarious example of this mindset comes from Washington Examiner writer Jerry Dunleavy. Dunleavy denied whites are a distinct cultural identity and relied on his ethnic background to make his case. “I am an American of Irish, Italian, German, Polish, & Spanish heritage. Each place certainly has a distinct cultural identity, and I was raised embracing Irish & Italian culture in particular (music & food respectively). Never once have I considered there to be a ‘White’ culture,” he tweeted. Essentially, he claimed occasionally enjoying Irish drinking songs and eating ravioli is a sign he’s Irish and Italian, not white. It was truly an Amerimutt moment.

Most white Americans share Dunleavy’s experience. They are so mixed and divorced from the old ethnic communities that they adopt whatever identity seems the most authentic and cool. Few Americans call themselves English because no one knows what it means to be an English-American anymore. Everyone knows what it means to be an Italian-American; the Italian-American identity is celebrated across our culture. It’s much cooler and more real to white Americans than Anglo identity. Yet, white American culture and identity is Anglo. We speak English, we uphold the rule of law, most of us are Protestant or Prot-influenced Catholics, our folk music is derived from the British Isles, hard work is prized, and corruption is abhorred. Most of American history is the work and ideas of Anglos. Most white Americans have assimilated to this Anglo culture, despite their protests that family pizza night shows they’re more Italian.

It’s not the average white American’s fault they feel this way; the entire culture tells them whites are bad and you don’t want to be white. Only neo-Nazis would be proud to be white. Most whites just see themselves as individuals without a race. They have no collective interest and white is just their skin color. Even the ethnic identity upheld by conservatives to flee from white identity is simply a window ornament that doesn’t mean anything to the conservative. It doesn’t define their life or make them feel part of a larger whole — it’s a cop-out from facing reality.

This “flight from white” is primarily a defense mechanism to defend oneself from the negative consequences of being white. Whites get shafted in university admissions, job hiring, and in moral stature. Saying you’re not white because you’re Italian or Spanish gives you the chance to escape from the limitations of being white. It may also save you from the moral blackmail non-whites impose on whites.

The Washington Post capitalized White not to encourage a positive identity, but to promote a negative identity that makes it easier for non-whites to guilt trip whites. “No longer should white people be allowed the comfort of this racial invisibility; they should have to see themselves as raced. Being racialized makes white people squirm, so let’s racialize them with that capital W,” wrote black historian Nell Irvin Painter in a July op-ed for the Post.

Robin DiAngelo, the author of White Fragility and the most popular source for Left-wing racial thinking, similarly believes whites should see themselves as a racial affinity group. “It is crucial for white people to acknowledge and recognize our collective racial experience,” she argues. Most Counter-Currents readers would wholeheartedly agree with that sentence, but DiAngelo is not pushing for a positive collective racial experience. Whites should unite around their shared sense of guilt and atone for the wrongs they’ve done to other races. The point of a collective white racial affinity group is to ensure no whites escape from this burden and they all acknowledge that they are lesser beings to POC.

Washington Post “global opinions editor” Karen Attiah supported the decision to capitalize White for the same reasons. Attiah says it reminds whites of their white privilege and how they benefit from systemic racism. Attiah is viciously anti-white and openly desires revenge against white women for being Karens and voting for Trump.

Whites retreating to colorblindness (“race isn’t real!”) or long-discarded ethnic identities likely won’t allow them to escape. POC set the discourse and mock attempts to say you’re Irish, not white. Whites will have to pay reparations even if their ancestors arrived after the Civil War. All whites equally share the guilt of America’s white supremacist past, according to the White capitalizers.

There is an unintended upside to this new framework. The Left’s insistence on racial categories will inevitably lead to more whites having a positive racial consciousness. White pupils who are taught in school that they have a culture and identity based on their race will likely take the logical course of being proud of that identity. They will emphasize the achievements and greatness of whites rather than our supposed sins. They will recoil at the abuse and unequal treatment they face for being born the way they are. Leftists intend for them to feel bad about this, but most whites will have the opposite response. That’s a good thing for our cause and could serve as the catalyst for a new ethnogenesis.

Conservatives will impotently cry that identity politics are bad and the real solution is for everyone — blacks, whites, Asians, and Hispanics — to all abandon racial identity and just see themselves as individuals. That’s never going to happen. Non-whites benefit immensely from this new paradigm and have no reason to give it up. This message only appeals to whites.

Individual white Americans must decide whether to embrace white identity or flee from whiteness entirely. Our enemies aren’t inclined to honor the second option.

» Counter-Currents Radio Podcast No. 283
Mark Weber on America in 2020