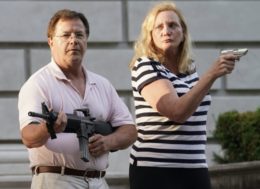 I am a creature of habit. One of my daily morning rituals, after snoozing my alarm at least twice, is to check my phone for the morning headlines and to have a look at trending topics on Twitter. The viral meme du jour this Monday morning was that of “Ken and Karen McBoomer,” who had the previous evening met a mob of angry protestors trespassing their private St. Louis property with an AR-15 rifle and a semi-automatic pistol.

Evidently, the mayor of St. Louis, a white woman named Lyda Krewson, had recently addressed the demands of constituents who were calling for the St. Louis police force to be defunded via a videoed Facebook Live briefing. During the briefing, she had read the names and addresses of several of the complainants, causing a backlash. The names and addresses of these people are a matter of public record. Nevertheless, the mob has accused her of “doxxing” the complainants and yesterday evening were marching to City Hall, I presume, to demand her resignation when the aforementioned confrontation with the “McBoomers” occurred. All indications are that the mainstream media is sympathetic to the concerns of this mob of “protestors.”

In their frenzy to oust the mayor, the mob ignored “private property,” “no trespassing,” and other signs indicating that the property and neighborhood were not situated on a public thoroughfare. They destroyed a wrought iron gate in the process of gaining access to the sidewalk adjacent to their affluent multistory residence. Despite this, the media has unanimously dubbed the mob “peaceful.”

As it turns out, the “McBoomers” are actually a professional couple named Mark and Patricia McCloskey. They are both attorneys, obviously of some financial means, who were enjoying their dinner at home when the ruckus and commotion of the mob invading their property alerted them. In an era when police are standing down and allowing rioters to destroy private businesses, one can empathize with the McCloskeys and their god-given right to defend their life and property.

After reading several mainstream articles about this story, a question occurred to me. How did the names of the McCloskeys surface? Did Mayor Krewson get on Facebook live and stream their names and address, along with their occupation, after hearing about the event?

It appears that a local CBS news affiliate, KMOV, was contacted by the McCloskeys who have subsequently given them a statement about what transpired. I’m sure that as attorneys, they knew that jumping ahead of the media and volunteering their statements was in their best interest, before the media had completely framed them as criminals with violent intent. (This didn’t work out as planned because they’ve done that anyway.)

What if they’d been working-class white people, without the benefit of legal training? Would the media have restrained itself from blasting their personal information around the globe for all to see, with or without a voluntary statement? As attorneys, they probably have a layer of insulation from all of this simply by having connections in powerful places. What of the ordinary Joe White Man who lives paycheck to paycheck and lives in a mobile home park instead of an affluent gated community? Who would come to his defense?

Remember, the McCloskeys were just a husband and wife enjoying a quiet evening at home having dinner together. It’s just a matter of time before their entire lives will be made public, as undoubtedly legions of Left-wing sleuths are scouring the internet for damning Facebook posts as we speak.

Remember, the chief complaint of this “peaceful” mob (that destroyed a wrought iron gate and trespassed on private property) is that the mayor had “doxxed” Leftists who had written to her in favor of defunding the police. These are activists, people who engaged in the political system with intent, not that this really makes a difference, but they are willing political actors nevertheless. The demands of this mob have found sympathy with the very mainstream media who are currently providing the personal information of two innocent victims, the McCloskeys, who had not publicly engaged in politics at all in this matter.

There is no ambiguity here. The Second American Civil War is underway. Mark the date. Your grandchildren will be reading about it in their history books. Their opinion of you will be defined by who wins the war, and the actions you either chose or neglected to take.

After all, this war has already been declared by your enemy, even if you are peace-loving and unwilling. Battle lines have been drawn. The war plans were written years ago. There will be no innocent bystanders. There will be no conscientious objection. There will be no neutrality. Your uniform is the color of your skin, your belligerency defined by your DNA. Just as it was with the McCloskeys.

If you are a liberal and reading this, learn to protect yourself and learn to take your own side. When the mob comes after you, they won’t care that you were a “good ally.” If you’re a conservative, it’s time to ask yourself, “what is it exactly that I have left to conserve?” If you aren’t saying your own life and wellbeing, then you’re a lost cause. Heaven help us all.

« The End of the Frontier