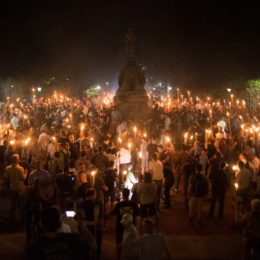 Much has been said in recent months about the cult of radical Leftism donning a veil of religious zealotry over the George Floyd death and Black Lives Matter protests. In truth, America’s excessively libertine, egalitarian idealism has always been a twisted morality play that relentlessly seeks to destroy the strong and healthy in favor of the weak. Nothing has really changed. Yet, the plot of this drama has taken an inexplicably twist in its most recent scenes.

For the last 70 years of post-war consensus, our dysfunctional Republic has adhered itself to the weak glue of civic patriotism, even if it was mostly just for show. Through this superficial form of patriotism, which is loosely tethered to Randian objectivism and selfish materialism, a deracinated and alienated people have managed to tolerate each other by focusing on individualistic pursuits and consumption.

Since the Civil War, American civic patriotism has been defined by the enemy without, rather than enemies within. Hitler, Japan, Communism, the USSR, jihadism, etc. These were unifying boogeymen that distracted us from the racial tempest within our own borders. But America’s taste for foreign conflict has grown sour with the never-ending War on Terror. With that shift in sentiments has come a renewed focus on domestic problems. Civic patriotism is dead, no matter what neocons do to resuscitate it, and in the wake of America’s death throes, radical Leftists have seized the opportunity to jockey for power within the Democratic Party.

Nothing does a better job of exposing this skin-deep faux patriotism than the pomp and circumstance of Independence Day. Still, as fragile as these civic bonds are, it is perplexing that the mainstream Left has openly embraced the dismantling of civic patriotism by Antifa and BLM. They are allowing these terrorist organizations to act as a solvent to corrupt what remains of American cohesiveness.

It’s tempting to blame this on “Orange Man Bad” Trump derangement syndrome, but at this point, it has transitioned into a full-blown revolution with a life of its own. A Joe Biden presidency will not be able to contain it, because they’re attacking the very institutions that the center-Left (that he’s helped manage) has adeptly exploited the last 70 years.

Over the July 4th holiday none of our once-sacred symbols, save for MLK monuments, were spared the wrath of this neo-Marxist Leviathan. One might even ponder the ultimate sanctity of shrines to King himself, once the mob figures out that his public message was one of reconciliation as opposed to the manic vengeance that propels their insurgency. It is inescapable at this point. Leftism has morphed beyond cultish religiosity to open insurrection against everything white, to even include iconic progressives like Woodrow Wilson as victims.

It doesn’t stop there! From Mount Rushmore to the “Star-Spangled Banner,” nothing is safe from the angry mob and its Woke Capital endorsers. One might even imagine Lady Liberty herself eventually becoming a target. One would also wonder what the game plan is here. To what end is this madness taking us?

Have the neo-Marxist rabble-rousers who have taken the driver’s seat in Left-wing politics really thought this through? What purpose could there possibly be in dousing the institutions of classical liberalism with kerosene and setting them on fire? Liberalism has succeeded, albeit tenuously, for a very long time at holding this rickety galleon of a country together. This is because it is an affirmative ethos, at once inspirational and lofty while naively idealistic. What this mob is pushing as their absolute value is anti-racism — a negative, caustic motivation that is supplemented with hateful anti-white rhetoric. The only logical conclusion to this course of action is one of two things: either racial separation or the wholesale mass slaughter of whites in open genocide.

Let me make myself crystal clear in this essay. Anti-racism has been the engine behind classical liberalism since the end of WW2. It is nothing new. It has been allowed to entrench itself only because classical liberalism tolerates it. This has worked for the duration, so long as anti-racism has been afforded a two-way street. Once academia saw fit to redefine racism as an affliction unique to whites, the trappings of liberalism had to be shed. This has culminated in the frenzy that we are witnessing today.

For hardened white nationalists, this idea is nothing new. We’ve been warning about this slippery slope for years. It started with Confederate monuments and symbols. The Virginia Battle Flag, statues of Robert E. Lee; these were early warning signs just a few short years ago. Still many of us, myself included, held onto a thread of hope that it would stop there. The unyielding attacks on Wilson, Churchill, and Saint Louis IX make it abundantly clear that all hope is now lost.

To be sure, the process will continue to be lingchi and not all-out-war, at least for the foreseeable future. Our demographic displacement hasn’t reached the requisite critical mass just yet. White self-hatred is certainly pandemic, but our racial esteem has not sunk so low as to voluntarily take cyanide pills. One has to hold out hope that something will give. The consequence of that is unmistakable. War. It will not be averted by Joe Biden or four more years of Trump. It will only be hastened by a black female presidency if and when that comes to pass. This path we’re on was inevitable. The trajectory we are on is irreversible. It has too much steam. Prepare yourself, it is coming.

Therefore it has never been more urgent that white people awaken and see the truth.

Voices such as Counter-Currents continue to be muted on social media. Deplatforming tactics escalate while Google suppresses search results. We are not alone, as sites like VDare, Amren, and even milquetoast libertarians such as Stefan Molyneux are targeted.

I truly believe that these tactics will prove to be futile, but ultimately that depends on the tenacity and veracity of dissidents. We can never relent in our mission to spread the truth.

» Not the Other Guy