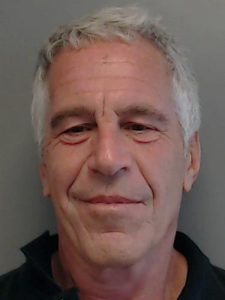 Many have been inspired by the Epstein affair to put fingers to keyboard and use it as a vehicle for their own particular hobby-horse. That is not my intention, and the insights I can offer are mostly background about Robert Maxwell, Ghislaine Maxwell’s father. It’s a fascinating story of opportunism and intrigue. This won’t be my usual, carefully considered analysis, but rather an “information dump” of what I know.

Jeffrey Epstein is the headline bogeyman, but the most fascinating character in this debacle is his “other half,” Ghislaine Maxwell – his right-hand woman, so to speak – and the supposed trainer of adolescent sex-workers. She and others would (allegedly) recruit the girls outside schools and so forth, and Ghislaine is reported to have coached them in sexual techniques. No doubt she also stood over while the girls wrote the post-encounter reports they were instructed to write. She was apparently very close to her father, about whom I can offer some details not covered elsewhere.

Maxwell senior made his first money in publishing by buying up academic journals. Back in the day, these journals were edited and run by slightly doddery, often retired professors, who had valuable experience and liked to keep abreast of their field. Many of the journals were run at or near a loss, the subscriptions were not costly, and the whole thing was founded on the laudable goal of disseminating human knowledge.

I remember back in the early days of the Heretical Press getting an order from a German library for Soviet Evidence at Katyn. It was the only edition worldwide in English, and the library had to have it. The order said “up to £99.” I think its price at the time was £3.60.

Every developed nation has at least one national repository for academic journals and books, and the Katyn publication was of particular interest to this library. I could have hardbound it specially and charged them £99.

My guess is that something like this happened to Maxwell. He realized that the price of academic journals was inelastic: The libraries would pay almost whatever was asked. For one thing, they hate having gaps in their collection. I have traveled across borders just to visit a library for a copy of an obscure paper. Maxwell’s initial fortune was made by buying up long-running but usually struggling journals, and then progressively hiking their subscription rates. The Elsevier publishing house was his prize and great moneymaker.

After Maxwell made his killing, academic publishing exploded as a lucrative business sector. It is now in an awful state. Almost without exception, the journals have online submission systems which resemble a hotel mini-bar, and everyone makes money in the enterprise except the people who actually do the research. Academics have to publish to continue their careers, so they are locked into this situation.

There is surely much that is unknown, but one of the ways Maxwell helped Israeli intelligence was by acting as a front for Promis (Prosecutor’s Management Information System). No doubt it has been far surpassed by now, but in the 1980s, Promis was the big thing in data-processing software. I mentioned this affair – but far too tersely – in my 2004 article, “The Female as Enemy.”

Promis was a sort of meta-database, a database collator. As I understand it, data from various sources was analyzed, for example tying together credit card charges, utility bills, and phone records. The software was stolen from the Inslaw company by Rafael Eitan, who was shown the software while visiting the American Justice Department using the name “Dr. Ben Orr.” Eitan, incidentally, is credited with running the spy Jonathan Pollard. The theft of Promis is officially recognized; a bankruptcy judge ruled against the Justice Deptartment in favour of Inslaw. High-level US government employees had passed the software to the Israelis.

Verint (formerly called Comverse-Infosys, or Comverse) was one company, but there were several, and the software also had different names. Maxwell’s firm Degem Computers was particularly successful at selling Promis back to the West, and picked up fifteen percent of every sale. In effect, numerous intelligence services were paying the Israelis for the privilege of collecting data for them.

Near the end, Maxwell was desperately short of money. Elsevier was sold. One account I read – but was never able to relocate – was of a meeting at an expensive New York restaurant where some big media name was being enticed to join Maxwell’s empire. The talks involved a golden handshake of a couple of million dollars or so, but the media personality began to suspect something was amiss by the end of the meal. By the time the bill was to be paid, the corpulent Maxwell had fallen asleep at the table, and by some means or other, it became clear that this was a deliberate ploy by Maxwell to get out of paying the bill. The media personality didn’t take up the offer.

I met someone who saw Maxwell and his entourage just a few days before his death in 1991. It was in some exotic island nightclub where Maxwell’s yacht, with its fifteen-man crew, had dropped in and berthed. I cannot recall all the details, but he was very impressed by the massive gold Rolex Maxwell was wearing, and I think there was also some fuss about payment. Maxwell’s life on the sea of stolen fortune had run its course; he had run out of credit.

The description of Maxwell’s death given by Victor Ostrovsky in By Way of Deception is plausible, and other Mossad operations described in the book have been separately confirmed. The story is that Maxwell, acutely short of cash and desperate to prop up his failing empire, begged the Israelis for £400 million, making the terminal mistake of threatening to spill the beans on some of the ways he had helped Mossad in the past. This sealed his death warrant.

Besides seeding Promis software all over the world, another way Maxwell served as a good sayan was when Maxwell’s luxury yacht, the Lady Ghislaine, was used to host a meeting of diehard Soviet Communists plotting to overthrow Gorbachev. The meeting was facilitated by Mossad. It was only after Maxwell’s death that the large-scale plundering of his newspapers’ pension funds became known.

Back to Epstein: Not a pedophile

Unsurprisingly, given that the mainstream media is essentially a propaganda operation, coverage of the Epstein affair is tendentious. The most powerful weapon the media wields is the assignment of labels, and in this case, their headline label is factually wrong.

Care must be taken not to fall into the trap of using the media’s terms, because their power is in introducing words and twisting language to further their agenda. Rationality must prevail. There is no evidence – so far – that Epstein is a pedophile. A pedophile is sexually interested in pre-pubescents, i.e. children. By all accounts, Epstein’s appetite was for developed – albeit young – girls. The proper term is ephebophile: an older man (usually) who is sexually attracted to adolescents.

Ephebophile is a new term, so may be regarded with suspicion. The word is not in my big reference dictionary (from 1986). Early marriage is evolutionarily advantageous, and marriage at adolescence has been common in many places and at many times in history. And during recent decades, the age of puberty has been steadily falling. A girl can maintain a pregnancy without complications just a few months after menarche.

Calling Epstein a pedophile is like calling a tap on the shoulder an assault. It is a legal nicety. A reassuring hand on the arm is legally, technically, a “common assault” – essentially, any unwanted touching – to distinguish it from a violent punch. Similarly, teenage girls may be legally categorized as children, but they are clearly not such. To allow the media to confuse these terms in our mind is hebetude, slothful thinking. It is the under-age prostitution and likelihood of wholesale blackmail that is the nub of this latest Jewish scandal. For proper allegations of pedophilia, there is “pizzagate”: another rabbit-hole yet to be fully explored.

Epstein evidently had a voracious appetite for shiksas, including underage ones. Perhaps his lust was fueled in part by inadequacy about his misshaped member. As a psychological assessment, this seems a quite reasonable starting point. One account was that when this came up at a legal meeting as his attorneys were seeking a discrepancy in a girl’s testimony, it caused Epstein to flee from the room.

Looking over the Epstein affair, one is drawn to the commonalities between Maxwell and Epstein. Both assiduously cultivated contacts among the highest levels of society. Their schemes differed in character and method, but both involved the rapacious exploitation of prize Gentile resources. Nefarious and often illegal means were used, yet these operations took place right under the noses of Western intelligence and prominent figures in government.

Given all this, it is fair to wonder how far Ghislaine Maxwell – the apple of her father’s eye and the real central figure in this affair – has fallen from the tree.