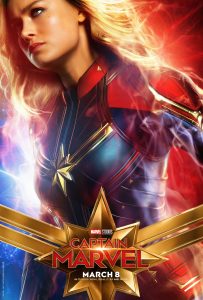 America has to once again endure a terrible, big-budget girl power film from Hollywood.

Captain Marvel is receiving much praise from critics and journalists as the first feminist superhero movie. The Marvel film, starring Brie Larson as the titular female superhero, has been propelled by non-stop propaganda. Multiple movie theaters made Captain Marvel the only film they would play last weekend. We were treated with the inevitable articles that the only people who hate the film are women-hating men and that this somehow has something to do with Gamergate.

Like with the all-female Ghostbusters, criticism of Captain Marvel prompted intense outrage and demands for censorship. Rotten Tomatoes erased several negative ratings for the film to protect its overall audience score. YouTube adjusted its search algorithm to make the top results for Brie Larson positive videos about her and Captain Marvel. Gamergate figure and congressional candidate Brianna Wu literally called for the government to crack down on negative reviews of Captain Marvel and other Lefty-approved movies.

Brie Larson’s press tour for the film has dripped with Left-wing rhetoric and aggression toward anyone who would dare criticize her film. Larson demanded more diversity among critics to ensure films are correctly reviewed. “I don’t need a 40-year-old white dude to tell me what didn’t work about A Wrinkle in Time,” she said. “It wasn’t made for him! I want to know what it meant to women of color, biracial women, to teen women of color.”

A Wrinkle in Time was both a commercial and critical failure, which Larson insinuates was due to evil white men. The actress has long voiced Left-wing opinions and has had no problem casting Captain Marvel as a progressive message film.

All of the propaganda, including a promotional flyover by the U.S. Air Force, worked for the movie as it easily topped the box office in its premiere weekend. The film looks to be a commercial success, in contrast to the flop that was 2016’s Ghostbusters. Then again, Marvel movies do fare better at the box office than high-budget comedies.

Your dear writer sacrificed himself to see the superhero movie to deliver Counter-Currents readers a review of it. Yes, it’s bad Hollywood schlock, and yes it suffocates viewers with a progressive message. This film doesn’t just hit you over the head with feminist viewpoints. It also lectures viewers about refugees, minority rights, imperialism, and bigotry.

It’s also not a very good film. Brie Larson is terrible as a lead actress and delivers a wooden performance devoid of personality and charm. Captain Marvel is supposed to be a smartass, but Larson is incapable of genuine banter, and nearly all of her lines come across as robotic. This is a superhero movie, so you can expect melodramatic dialogue on space powers and long fight scenes soundtracked with ’90s hits. (The film takes place in 1995 for some reason.)

The film begins with Vers, the Captain Marvel-to-be, training with her elite Kree commando unit. The Kree are a blueish alien empire that are at war with the Skrulls, a goblin-like shapeshifter alien race. Vers is told early on she needs to learn to control her emotions by her Starforce (creative name!) commander, Yon-Rogg (played by Jude Law), and the Supreme Intelligence thing. This message plays into the feminist arc.

After a mission against the Skrulls goes awry, Vers is taken prisoner by the ugly green people who then tap into her memories . . . memories that Vers has forgotten (!). They show her past life on Earth, which seems entirely centered around men mansplaining to her. They include an Air Force pilot telling her that there’s a reason it’s a “cockpit,” her domineering father telling her she shouldn’t be racing golf carts, and a coach telling her baseball isn’t for girls.

No surprise, Vers breaks out of her imprisonment and goes strong women mode on a legion of Skrulls. She escapes the alien spaceship to land in a Blockbuster in 1995 Los Angeles. The film then goes into a ’90s nostalgia trip–complete with TLC songs and Vers wearing a Nine Inch Nails shirt–as the protagonist chases and is chased by Skrulls and Agents of S.H.I.E.L.D. At one point in this film section, a male biker harasses Vers and demands a smile from her, just like your male chauvinist. Vers shows him up by stealing his bike.

Eventually, Captain Marvel teams up with Agent Nick Fury (played by Samuel L. Jackson) to find out why she remembers a female scientist named Wendy Lawson (played by Annette Benning). They travel to a secret government base where Vers learns the truth that she was a U.S. Air Force pilot, named Carol Danvers, who flew the secret aircraft that crashed and killed the cool female scientist. Shocker, but the Skrulls tracked down Fury and Vers and they make their escape in an aerial vehicle. They fly to Louisiana to meet Vers’ old black female co-pilot, Maria Rambeau. Vers and Rambeau have a bitchy conversation about how they weren’t allowed to fly combat missions even though they were great pilots. The glass ceiling is real in superhero movies.

Once again, the Skrulls find them . . . but things are not what they appear. Skrull leader Talos plays an audio recording from Vers crash (complete with a ’90s joke about how long it takes to load CDs on computers) that triggers Captain Marvel to remember what happened. Dr. Lawson was a rogue Kree who built some special core that would bring peace to the world. She is killed by none other than Yon-Rogg after the plane crash, which leads Vers to blow up the core embedded in the aircraft. That, naturally, gives our protagonist superpowers and leads the Kree to adopt her as their own.

Realizing the Kree are now in fact bad, Vers listens to Talos tell her that his people are not terrorists but decent refugees seeking a new homeland. The Kree want to exterminate them for bad imperialistic reasons, and Vers realizes Kree propaganda made her hate these innocent aliens. She then adopts her Captain Marvel attire, gives an inspiring speech about empowerment to Rambeau’s daughter, and flies off with her new Krull friend, her black female co-pilot who somehow knows how to fly a spaceship, Agent Fury, and a cat to find Dr. Lawson’s space laboratory.

Our motley crew finds the laboratory housing dozens of Skrull refugees who are hiding from their Kree oppressors. The Kree Starforce finds them of course, and Vers is locked into a dream state with the Supreme Intelligence who plays Nirvana’s “Come As You Are.” Vers eventually breaks out of the dream thanks to her removing the chip intended to control her and unleashes her full girl power on her Kree attackers. The scene where Vers breaks free goes through her memories of picking herself up after male criticism and attacks. She’s just like average women who shake off the patriarchy to break the glass ceiling of filing the best monthly reports.

She defeats the Kree Starforce in an unnecessarily long fight scene that sends her to Earth. She also manages to save Earth from a large-scale ballistic missile strike from a Kree attack fleet. In her last battle with Yon-Rogg, Law’s character tries to persuade her to fight him without her super powers. She hits him with a blast of energy and informs him she doesn’t need to prove herself to him or control her emotions. Take that, patronizing boss!

Yon-Rogg returns home defeated, and Captain Marvel celebrates with her victory with the Skrull refugees and other friends at Rambeau’s house in Louisiana. At some point in their merry conversation, Talos remarks how much he loved having beautiful blue eyes as one of the humans he impersonated. Rambeau’s daughter informs Talos’s daughter that Skrulls have beautiful eyes, and no one should tell them different. Captain Marvel had to get in a line skewering white beauty standards.

The film ends with Captain Marvel taking it upon herself to lead the Skrulls to a new homeworld, and they set out for the galaxy. In other words, Larson’s character is a privileged white woman who acts as a savior to oppressed minorities. Maybe that’s not so woke, but it definitely plays into feminist delusions about helping migrants. Every European woman who takes in a Syrian migrant or travels to Haiti for aid work imagines herself as a superhero uniquely endowed to help non-whites. Often the results don’t align with Hollywood propaganda

Captain Marvel imagines a world where women are only held back by evil men, and they have the capability to be the best pilots, scientists, and fighters if given the right encouragement. The film also plays to the Trump age with its pro-immigration message that tells viewers they should accept strange outsiders and consider the real enemy may be your own people. Dr. Lawson betrays her own race to deliver a weapon to their mortal enemies. She’s a hero in the movie.

It’s neither surprising nor a new development that Hollywood movies convey terrible messages to viewers. In years past, the big blockbusters tried to restrain excessive Left-wing propaganda in order to appeal to the widest audience. Captain Marvel dispenses with that restraint to become a dumb superhero movie with an insidious message. It does come from the same company that produced Black Panther, the black power film of the 21st century. Captain Marvel is the Black Panther for women, except of lower quality.

The unfortunate success of both Black Panther and Captain Marvel mean we are going to have to endure more social justice superhero films. We still haven’t had a Latina superhero, or a gay man in tights. The possibilities for more minority identity heroes are endless.

Sadly, too many people around the world hand over their money and encourage these rotten studios to produce more dreck. The average Captain Marvel viewer probably didn’t pick the movie because they wanted to support feminism. They just wanted to see cool special effects and big explosions. And that average viewer will accept any progressive message the film evinces so long as they get what they wanted to see.

It’s not like everyone wanted this film to succeed. Some popular YouTubers urged their viewers to not see the film and alt-lite figure Jack Posobiec started a Twitter campaign to convince conservatives to see Alita: Battle Angel instead of Captain Marvel. Conservative efforts didn’t work, and the latest Marvel film will likely be one of 2019’s highest grossing films.

The Right lacks the cultural capital to mount effective boycotts and too many middle Americans are willing to hand over their money to people who hate them. Counter-Currents readers can at least rest easy with the knowledge that not seeing Captain Marvel is the right call.