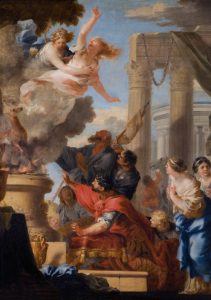 Sébastien Bourdon, The Sacrifice of Iphigenia

Translator’s Note: The following extracts are drawn from Emil Cioran, De la France (Paris: L’Herne, 2015). The original was written in Romanian in 1941.

Countries – unfortunately – exist. Each one crystallizes a sum of errors called values, which it cultivates and combines, and which it circulates and gives currency towards. Their totality constitutes the individuality of each country and its implicit pride – but also its tyranny, because it weighs unconsciously on the individual. However, the more gifted he is, the more he detaches himself from their pressure. All the same, because he forgets – because he lives – the deficiencies of his personal identity integrate him into the nation to which he belongs. That is why even saints have a national character. . . .

When we speak of France, what are we doing? We are describing the fecund errors committed by a certain segment of the Earth. To take their side or to oppose them means to accept these errors or to reject them. (20)

Style is the mind’s architecture. (25)

Without a dose of artificiality, the human spirit breaks under the weight of sincerity, that variant of barbarism. (35)

When does a civilization begin its decline? When individuals begin to become conscious; when they no longer want to be the victims of the ideals and the beliefs of the community. Once the individual is awakened, the nation loses its substance. And when all are awakened, it decomposes. Nothing is more dangerous than the wish to have not made a mistake. Collective lucidity is a sign of weariness. The tragedy of the lucid individual becomes the tragedy of a nation. Every citizen becomes a little exception, and these accumulated exceptions become the nation’s historic deficit. (35-36)

Only peoples who have not lived do not fall – and the Jews. (39)

Spiritual exhaustion leads to the mummification of a culture. (47)

Decadence is the lack of ideals, the moment where disgust for everything appears; an intolerance for the future – and, as such, a feeling that time is running out, with its inevitable consequence: the lack of prophets and, implicitly, the lack of heroes. (51)

The vitality of a people is manifested by those who are willing to die for values going beyond the limited sphere of individual interests. The hero dies with good grace. But this final consent is only possible because he is unconsciously guided by the vital force of his people. (52)

Nations make their way in sublime errors and end among arid truths. (52)

The Homeric heroes lived and died; the snobs of the West talk about pleasure and pain. (52)

A people can be considered infected when the problems penetrate its instincts, when doubts penetrate its senses, when uncertainties penetrate its reflexes. Its body reacts against the mind’s interventions. Biological decadence is an excess of rationalism among reflexes. . . . Life is full only in unconsciousness. (54)

Alexandrianism is the period of learned denials: refutation as cultural style. Man wanders nobly among ideals; the thinker has his mind subtly slither among ideas. (62)

At bottom, what is a civilization? The absurdity of life made into a system, a provisional order amidst the incomprehensible. As soon as these values exhaust themselves and no longer guide the individual to faith and to action, life reveals its meaninglessness.

He who lives on the margins of all forms of culture, who is no one’s victim, condemns himself, because he perceives by their transparency the nothingness of nature.

The succession of civilizations is a series of resistances which man raised against the dread of pure existence. (67)

A people has vitality as long as it accumulates forces dangerous for itself and for others. (67)

From the point of view of vitality, to be ahead [historically] is detrimental, because by taking a step – or even several – beyond the banalities of life, one frees oneself of the fertile burden of values. (68)

A nation only achieves greatness by looking beyond its borders, by hating its neighbors and desiring to subjugate them. To be a great power means to not accept parallel values, to not tolerate life besides oneself, to impose oneself as the mandatory and intolerant way. (74)

While I understand infinitely better the Romans of the end – softened by vice, disbelief, and luxury – than those of the period of greatness – rough, healthy, and confident in their idols – I retain some respect for the altars of illusion and the temples unshaken by irony. When Cato the Elder said that two augurs could not honestly look each other in the face without bursting out laughing, I believe him, not without mourning these vital superstitions. Once our symbols are abolished by lucidity, life is no more than a stroll among abandoned temples. How can we live merely among the gods’ ruins? The desire to exist pushes me towards the dream of other deceits; I have not hung around decadence without feeling the need for lies of which I had only seen glimpses. The Barbarian awakened. It was the only response – that of vitality – to the doubts of knowledge. (82-83)