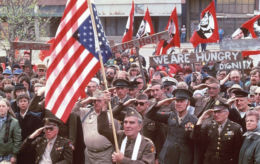 In my last article, I wrote on the question of whether politics should be abandoned or not. My conclusion was that no, it should not be. However, those who wish to improve themselves and those in their immediate vicinity should also be heeded lest we go down the all-too-common, unproductive path of browsing Telegram and Discord all day and foolishly calling it “political activism,” as so many keyboard warriors do today. Both of these erroneous paths, the isolationist self-improvement modus operandi and the online, supposedly volunteer quasi-activist, are two microcosms of the same thing: the feeling of helplessness that is the new zeitgeist in dissident politics.

Whether it be normie-cons (at least those of the less naive variety) or true dissidents, everyone seems to be burnt out. Activism in the traditional sense is clearly not working; it is a product that no one wants to buy, and thus our hours of attempting to sell it to the masses is ending up as more and more time gone down the drain. The more we interact with those who we believe to be “our people,” the more cynical we often become, forcing ourselves to refrain from hating those who we sought to save from certain destruction. If you have had to fight off this counterproductive “disdain for plebs,” it should now be clear how once-romantic revolutionaries sometimes turn on their own people.

The United States government is rapidly transitioning from liberal soft power to revolutionary hard power. It has become clear that the days which we only half-seriously predicted for decades are now upon us. Freedom of speech is actively targeted by the regime, as are our firearm rights. Privacy is gone. Warrants are a joke when the regime has already decided you are on their naughty list. The government’s paramilitaries run amok with no repercussions, while the police in most major metropolitan areas are just antifa with a badge. Given that we are now seeing attacks on the highest court in the land, the normalization of arresting political opposition, and even literal show trials on prime-time television, America has descended into Third World status, the only difference being that we still have some vestiges of the luxury, infrastructure, and complexity bestowed on it by generations long dead.

This stark reality can at times result in a sort of learned helplessness among those who see what is wrong with the current power elite’s supposed utopia. At this point, those in the US are perhaps experiencing the worst time to be alive there. The time when America was a beacon to the world, a nation which could literally land on the Moon, is barely within living memory, while the light at the end of the tunnel is nowhere in sight.

While standing idly by is a mistake, engaging in mainstream politics is clearly fruitless. It is true that the government is composed of cartoon characters who are as moronic as they are evil. However, in my experience agents of the state need not be brilliant part-time philosophers or mathematicians to get the job done. While they are only barely competent, they remain competent nonetheless. Thus, the Global American Empire (GAE) is at a standstill. While the empire remains competent enough to utilize its multi-trillion-dollar apparatus, it is essentially an impossible beast to slay at the moment.

In warfare there is, of course, offense and defense. Oftentimes these two things are unbalanced. When large siege cannons were introduced onto the battlefield by the Ottomans, offense had the advantage and defense the disadvantage. In the Great War, trench systems and machine guns gave the advantage to defense until the introduction of the Landship, now known as the tank, which was able to drive over trenches and had enough armor to fend off machine-gun fire.

Today, the US government has a heavy defensive advantage against all threats, be they foreign or domestic. Even the Russians and Chinese are not gung-ho to go to war with mighty Uncle Sam (pronouns: they/them), and indeed have equipped their own militaries for defensive wars themselves. As for domestic contenders, it isn’t even a question who is boss. Furthermore, America’s domestic dissident movements could never take on a government so powerful, no matter how much power they themselves had. For the time being, those with a better future in mind have no Wunderwaffen to address their grievances, and thus we wait until the tiger has tired itself out before strangling it.

As America descends further and further into a glorified banana republic, and even the Left-wing Euros we once ridiculed for their libertinism now wince at the revolution ongoing in this once-great country, it becomes ever clearer that collapse is not a fun thing to experience. It isn’t like Mad Max, where you and the lads get to arm up and go “innawoods.” Collapse means transitioning from what was once the country with the highest living standards on Earth to not being able to afford gas, the disappearance of baby formula, corrupt police, the breakdown of the rule of law, roving quasi-state-sanctioned Bantu gangs, pedophilic politicians, and unnavigable dating and housing markets. In our collapse, even that which is post-apocalyptic is wishful thinking.

In essence, the new zeitgeist isn’t simply the black pill, but rather seeing the world as it truly is. We, like a Russian citizen in 1950, are under this Leviathan for the foreseeable future with little hope of affecting any meaningful change. It means putting on a brave smile, braving these winds of time, and standing strong, similar to the demeanor which I wrote about when describing what the song “Little Dark Age” means to dissident youth.

It is no longer reasonable to deny that the America of yore is long gone. Nevertheless, while there is general pessimism among all segments of society regarding America’s prospects as a state, there is not a universal black pill in this new zeitgeist. Rather than mourning the loss of the first war, we must continue to rebuild and prepare for the next. The occupation government has dropped its mask. Now we wait.

« Our Prophet: Christopher Lasch’s The Revolt of the Elites, Part 1