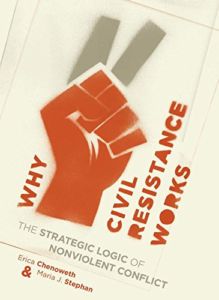 Every industry has its own best practices, including that of advocating for some form of social change. There is a menu of tactics one can choose to effect social change that range from all-out civil war to insurgency to non-violent civil resistance.

Erica Chenoweth, Ph.D. and Maria J. Stephan, Ph.D. took a look at a century’s worth of data, and in 2011 they published a well-received book entitled Why Civil Resistance Works. They argue that of all the different ways to create social change, non-violent civil resistance is the most effective.

From what I’ve gathered from watching their lectures and speeches online, the two women are quite different from each other. Dr. Chenoweth exudes charm and is able to explain the concepts in her book in simple, easy to understand terms. Dr. Chenoweth frankly states that non-violent civil resistance can be used by any cause, in any place, and for any reason.

Dr. Stephan is a true believer in the neo-liberal globalist ideology. She worked for the US State Department in Syria at the start of the dreadful conflict there, and is of the same school of thought as Crooked H and the late Madeline Albright. She radiates an evil vibe and strikes me as the type of Deep State operative who would lovingly napalm the people of Indiana if their elected representative blocked funds for some state-sponsored adventure in a far-off land.

The pair focused on maximalist campaigns, i.e. regime change against a Brutal Dictator,TM ending a foreign occupation, or a succession movement. They focused on those types of campaigns to show that non-violent civil resistance can work even in the most difficult cases. They did not include campaigns such as Gandhi’s in India, because Indian independence came long after the peak of Gandhi’s efforts. If a dictator dies in office, that doesn’t count for them, either. Phenomena such as the “civil rights” movement or agitation for things like climate change or more medial research was also not included in their data set.

They classified the results of all social change movements, violent or not, into categories of successful, partially successful, or failure, and found that since the 1970s, non-violent civil resistance increased in success and violent campaigns increasingly failed.

Why Do Violent Campaigns Fail So Often?

Doctors Chenoweth and Stephan argue that events such as Fidel Castro’s takeover of Cuba using a small cadre of armed men are aberrations. The reason that most violent insurgencies fail is due to several factors.

The first is that it is physically difficult to be an insurgent. Insurgent forces must be made up of military-aged men who are willing to live in difficult conditions for an indefinite amount of time. There is also considerable training required for a fighter to be effective, and each one who is killed, wounded, or captured is a big loss for an organization that is operating on a shoestring budget.

Second, violent actions such as bombings tend to go off-message. The injustice of immolating the attendees of the annual Dog Breeders Association’s conference becomes the overriding narrative rather than the cause the bombing was carried out to support.

And finally, those people supporting the ruling regime usually become hostile to an insurgency.

It’s also the case that insurgents tend to be poor rulers in the off-chance that they actually win. Nations that are born through a violent insurgency, such as Algeria, usually don’t become well-functioning civil societies. The former insurgents who become the new rulers often see things through the lens of warfare and then rule by the sword. Consequently, they often perish by the sword.

There are many non-violent movements which have a violent flank as well. They tend to be less successful than completely non-violent campaigns because they are continuously undermined by the problems of the violent tactics noted above.

Non-violent civil resistance campaigns are more likely to win for several reasons. The most important one is sheer numbers. If the campaign is free of bad optics such as pulling injured children out of rubble, more people will join it. To effect social change, only 3.5% of the population needs to be involved. Civil resistance campaigns that have as many women as men participating have a much higher chance of success.

The main mechanism for success is moving the pillars of support of the established regime towards the ideas of the civil resistors. In Serbia in 2000, protestors overthrew Slobodan Milošević by bringing the security forces over to their side. Interviews with the police and soldiers after the event confirmed the same basic elements: leaders in the security forces thought their children would be among the protestors, or their wife’s sister and so on. One soldier recognized a clerk whom he had purchased alcohol from on Saturday afternoons among them. Other soldiers identified with Milošević’s tracksuit-wearing rival. During the 1979 Iranian Revolution, the Shah fell when the security forces who were detailed to force striking oil workers back to work started to call in sick.

There is never really a Year Zero after a revolution succeeds, including for those that win through non-violence. Successful non-violent civil resistance movements consist of many different ideological and political groups that cease to be allies at the moment of victory. The faction which eventually takes over is the one with a cadre of skilled people who can quickly take over government operations. In Iran, Ayatollah Khomeini already had an existing shadow government ready to go, and they moved into positions of power immediately. He then proceeded to liquidate his former Marxist allies.

In the years since the book was published, Dr. Chenoweth has added to her theories. One concept that she has explored is the idea of smart repression. A way for a government or establishment to eliminate a powerful civil resistance is to employ a multi-pronged non-violent civil resistance of their own. Several of the strategies can be combined in order to control the journalistic narrative. In foreign countries, it means banning outsiders and independent journalists. In the United States, it means strict editorial control over the mainstream media to better carry out journalistic spin and censoring. Governments can also use many different means to conduct digital surveillance.

The establishment, along with its sympathetic media, can mischaracterize the opposition as terrorists, traitors, or coup plotters. They can also co-opt the opposition by proposing reforms endorsed by the opposition which they find agreeable. They can make use of pseudo-legitimate laws and practices to maintain their grip on power and selectively enforce other laws. Another strategy is to use their own “non-violent” supporters as well as thugs, death squads, and paramilitaries to suppress their opponents. Civil resistors can likewise be entrapped by agents provocateurs. The supporters of the establishment can also be paid off, and information can be shared with regime allies.

The parallels to the BLM/antifa rebellion in 2020, as well as the craven cowardice of the Republican establishment, police, and military in dealing with that event, is obvious. The media’s hostility towards and censorship of Donald Trump during the fraudulent 2020 election is also clearly a tactic such as described above. The treatment of the January 6 protestors is similarly an example of an immoral regime’s smart repression. But it is important to note that digital activism is always at risk of government surveillance and manipulation.

BLM/Antifa: The Violent Flank of the Democratic Party & the Establishment?

The Establishment overturned the successful non-violent civil resistance movement that was the Trump administration by means of their own “civil resistance” that consisted of voter fraud, smart repression, and a violent BLM/antifa flank, but it was only partially successful due to its violent flank. The Biden administration has been wounded since election night and has yet to recover. Republicans won the off-season elections in Virginia and New Jersey by campaigning against Critical Race Theory. Even the homosexual movement’s gains during the Obama administration are being eroded. Thus, the Democratic Party and neo-liberal establishment were not helped, even in the short run, by their violent BLM/antifa flank.

Non-violent civil resistance can be used by any group, at any time, and for any reason. For those of us who are resisting the Great Replacement, it is obvious that non-violent civil resistance is a good idea. We first need to get more than 3.5% of the population to endorse some of our ideas. In doing so, we need to cut ties with any “Right-wing” militia or paramilitary group. No white advocate should wear a uniform or go around swinging their fists in the streets.

Optics is key. No white advocate should dress in a way other than that of a respectable member of society. Every piece of writing, action, or event should be carefully planned and executed. Any references to the National Socialist movement needs to be dropped. Instead we need to be sober, responsible, and able to turn key pillars of support to our side while becoming skilled enough to build a shadow government awaiting its posting.

And then we must govern wisely.

« Is It Possible to Enjoy Being Raped?

» The Pornographers Who (Said They) Fought for Freedom of Expression