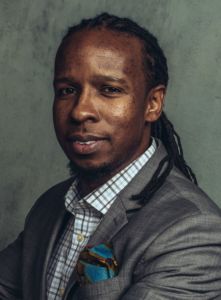 “Grifter” is the closest thing political commentators have to an N-word. As a term of abuse, however, “grifter” is itself much abused. If someone makes any kind of money talking about politics, especially online, he will inevitably be called a “grifter” by someone. People say Nick Fuentes is a grifter because he makes thousands of dollars a week in superchats. Chapo Trap House makes $170,000 through their Patreon. What a bunch of grifters! And if someone sells merchandise, there’s no debate: He is definitely a grifter.

“Grifter” is a particularly annoying epithet when used against people on the Dissident Right because they are often promoting ideas that render them unemployable. If you are going to promote Dissident Right ideas under your own name, you basically have to do it for money unless you are independently wealthy, self-employed, or have a really cool boss.

I am inclined to believe that most political e-celebs are driven primarily driven by a desire for fame and recognition than money. They just want to be a somebody. It would be more accurate to call these people “attention whores” or “spotlight chasers.” A drive for attention and notoriety is often a more destructive impulse than being motivated by money.

If money is a factor at all for these people, it would be more in the sense that not having to have a day job is appealing. That’s not really a character flaw, because being able to make a living doing something you enjoy is everyone’s dream. That’s not quite the same as being motivated by pure avarice. A lot of e-celebs could probably make more money with a normal 9 to 5 job.

To me, a “grifter” is someone who promotes ideas insincerely and strategically in order to maximize profitability. No matter how much money someone makes, he is not a grifter if he actually believes what he says. The whole point of calling someone a grifter is to avoid having to address his points or explain his success by suggesting that he doesn’t actually believe what he says. The term is hand-wave, and 9 times out of 10, it is used by player haters. I’ve never seen someone call someone less successful than himself a grifter. Actual, self-conscious frauds are rare.

Gavin McInnes was a grifter because he knew the truth. He wrote for TakiMag alongside John Derbyshire and Steve Sailer. He used to go to the annual VDare Christmas party. And yet he would frequently argue against White Nationalism by saying stupid things like, “All-white countries are not ideal because they tend to be more socialist. Just look at Scandinavia!”

I understand that, depending on your level of prominence, there are limits to what people can say and still pursue activism at that level. I respect the fact that there are limits to what Tucker Carlson can say and to what someone can say on YouTube. It’s absurd to expect someone to kamikaze himself in the name of purity when he is doing good work. But there is a big difference between avoiding or sugarcoating dangerous topics and actively arguing against those who are addressing them. Gavin crossed the line from the former to the latter way too many times.

Hasan Piker, with his $3 million mansion, is also a grifter, but the fact that he has money isn’t what makes him one. It’s the ostentatious displays of wealth and his drive for extravagant material comfort that calls his credibility and sincerity as a spokesman against greed into question. Certainly, someone who lives in such opulence is probably not going to know the price of milk and has no business claiming to be a champion of the working class.

Then you have Jacob Wohl, who puts food on the table simply by telling ridiculous lies about various Democrats. Jacob Wohl is pure grift, as his whole shtick is promoting stories that he knows damn well are not true. I’m not sure how he manages to translate that into a paycheck, but apparently, he does.

The problem with calling someone a grifter is that you can’t see into someone’s heart. Sometimes a grifter will slip up, however, and accidentally reveal that he knows he is peddling bullshit.

Such an incident happened last week when revered angry negro and viciously anti-white race hustler Ibram Xylophone Kendi — he goes by Ibram X. Kendi, because there was already an Ibram Kendi registered at the E-Celeb’s Guild — accidentally disproved “white privilege.” 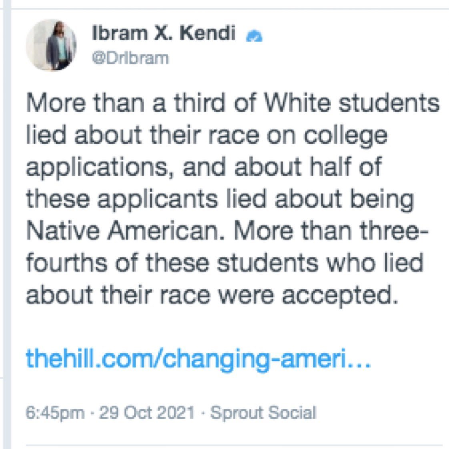 I do this as well, quite honestly. I always mark “Other” or “Two or more races” on applications. I have a smidgen of non-white ancestry dating back to the early nineteenth century, when there was a severe shortage of white women in the Louisiana Territory and my great-great-great-etc.-grandpappy Jean LeBlanc got lonely at night. Besides, Cajuns are a legally recognized minority, but they never list “Cajun” as one of the options on the form, so I put “Other.” Besides, liberals love telling me that white people don’t exist, so why should I be penalized for belonging to a group that doesn’t actually exist?

Once Ibram X-Ray Kendi realized that the study did not exactly make the point he was trying to make — or at least not perfectly — he deleted the tweet shortly afterward.

What was the point that Ibram Xenon Kendi thought he was making? Mr. Xylophone thought he was pointing out the fact that white people lie, and that as a result of their lies, they are taking away seats at colleges that rightfully belong to people of color.

Mr. Xylophone was on anti-white autopilot, however, and did not think more deeply about the story’s second-order implications. There were two elements in it which worked against everything Kendi said. First, if “white privilege” is a real thing, and if the establishment really is biased in favor of whites, then why would white people feel the need to lie? Secondly, if the system is biased against minorities, then why does lying about being a minority have such a high success rate (81%)?

People were quick to point out this blunder. 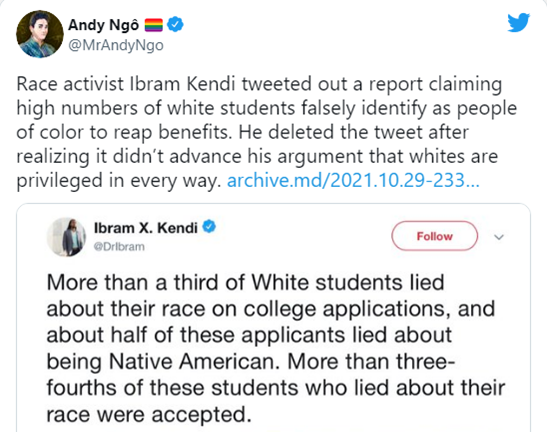 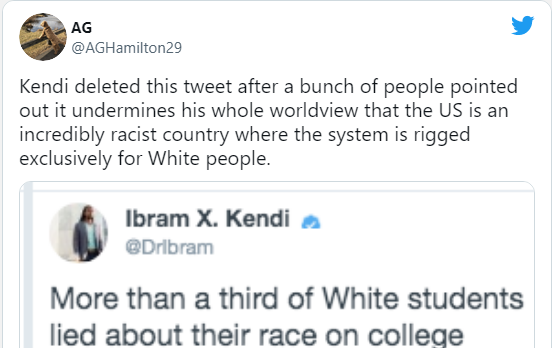 Granted, there are occasions when the data will appear on the surface to go against your position. We hear anti-whites say things to us such as, “There is more genetic diversity within races than between races” and that that “Immigrants commit fewer crimes than native-born Americans.” Then you have to explain why those facts, while perhaps true, do not actually prove what they believe it proves, and/or are not actually inconsistent with a White Nationalist worldview.

In this case, however, Mr. Xylophone made no serious attempt to explain how these factoids were consistent with “white privilege” theory. His deletion of the tweet was ultra-damning. I’m sure he would like you to believe that addressing such arguments is not worth his time, but chances are that Mr. Xylophone knew as well as everyone else that there is no counter-argument.

After The Post Millennial ran an article about Mr. Xylophone’s stunningly hilarious own goal, Kendi was forced to respond:

This is the closest Mr. Xylophone comes to circling the square. “Just because white people think that doesn’t mean it’s true.” How do you know POCs are the delusional ones? You would think that societal insiders would have a better grasp of how society works than societal outsiders.

And this still doesn’t explain how white people came to that conclusion, nor does it explain the high rate of success for people who do lie about being POCs.

This might be true, but the idea that these disparities are the result of systemic or institutional bias is still unfounded and undercut by the statistics that Mr. Xylophone has himself cited. But this all begs the question: If those stats are consistent with Mr. Xylophone’s worldview, and his main point was that whites are liars, then why delete the tweet?

Occam’s razor here is that Ibram Xylitol Ibram is full of shit, knows he is full of shit, and has managed to become a millionaire in the process. If there is anyone who deserves the title of “grifter,” it is the xylophone man.