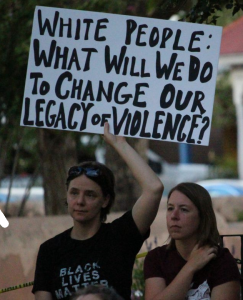 There appears to be a sea change underway on the American Right, as edgy, yet still-mainstream conservative outlets use the term “anti-white” increasingly often, as the word “white” becomes less and less unmentionable on talk shows like Tucker Carlson Tonight, and as Republican State legislatures across the nation adopt legislation to combat “critical race theory” propaganda in government, schoolrooms, and corporate boardrooms.

While these are all developments to be celebrated, there is a tendency to translate them into an undeserved optimism, to mistake anti-anti-white discourse as disguised pro-white discourse, to see anti-anti-whiteness as a stepping stone on an inevitable path towards pro-whiteness. We can certainly hope that this is the case, but nothing really suggests that it is. In fact, much suggests that the growing pushback against “critical race theory” may actually harm white interests.

Ending “critical race theory” propaganda is indeed an implicitly white interest, but only insofar as critical theory is currently applied. Race is central to the human experience, and to pretend otherwise is nothing short of absurd. In this respect, even the most pathologically egalitarian Leftists are actually more honest about race than the average Republican voter. Boomer “colorblindness” was a lie, a trap used to racially disarm whites as the other races sharpened their spears and carved out evermore spoils for themselves.

Christopher Rufo, a conservative journalist, has performed true yeoman’s work in exposing the massive corrosion of American institutions by anti-white critical theory; in this, he merits our unqualified praise. Yet this leading anti-anti-white figure is himself the perfect illustration of why anti-anti-whiteness will inevitably fail.

What follows is an interview of Mr. Rufo by the black activist Marc Lamont Hill. I have transcribed the relevant portion, but it really must be seen.

Marc Hill: If I were to say to you right now, Christopher, what do you like about being white? What would you say?

Christopher Rufo: I don’t know. . . it’s such an amorphous term, it’s like a census term or a crude chromatic term.

CR: Well, sure, I’ll answer with a thing; there’s a lot of documents that are floating around public schools that say things like, timeliness, showing up on time, is a “white supremacist value,” “white-dominant value,” things like rationality, things like the Enlightenment, uh, you know, objectivity, and these are strange things to be ascribed to a racial identity. My view is that these. . . actually should be ascribed to every individual human being, every individual human being regardless of whatever racial category we impose on them.

CR: Again, I don’t buy into the framework that the world can be reduced into these metaphysical categories of whiteness and blackness. I think that’s wrong; I think we should look at people as individuals, I think we should celebrate different people’s accomplishments, and, again, I think the idea — you mentioned [Noel] Ignatiev, Ignatiev says the goal is to “abolish the white race.” In any other context, this would be interpreted as a near-genocidal slur. I don’t buy into it. The reason I’m not going to answer your question is [that] I reject that categorization, I think of myself as an individual human being with my own capabilities, and I would hope that we can both judge each other as individuals and come to common values on that basis.

Before we excoriate Mr. Rufo too harshly, we must first acknowledge that Mr. Hill was not necessarily acting in good faith. Why should he? The entire premise of his straightforward question is that there is nothing good about whiteness, that whiteness is some miasmic pox upon humanity.

If Mr. Rufo had answered the question in the way that we would have wanted him to, he would no doubt have been roundly denounced as a “white supremacist” by the press. Though his work exposing “critical race theory” is already denounced, a response couched in explicitly pro-white language would surely have brought a level of opposition too intense for a man like him to withstand. In this manner, Mr. Hill might be seen as attempting to lead Mr. Rufo into a trap with that question.

On the other hand, there was an acceptable response. Mr. Rufo could still have refused to answer the question, saving face from a potentially ruinous assault on his career, while also preserving his dignity as a white man. He could simply have pushed back against Mr. Hill’s premise by asking the uppity black why exactly it is that whites should have to justify our existence? Why should whites be required to argue for our survival, to prove our value to mongrels who despise us?

Of course, we don’t have to justify ourselves to others. But that’s not what happened here. What happened here was disturbing: the leading figure in the fight against anti-white critical theory was flummoxed, unable to identify one thing that he thought was good about being white. This was not mere cowardice, but rather something far deeper.

Unfortunately, Mr. Rufo presented himself as the cuck par excellence. By refusing to answer such a simple question on the grounds he gave for refusing to answer, he verified Mr. Hill’s premise: that there is nothing positive about being white. Here, then, is the Achilles’ Heel of the fight against “critical race theory,” and anti-anti-whiteness in general; if we cannot say that whites are worth defending, if we cannot even name one of our infinite triumphs as a people, then why the hell are we fighting back against anti-whiteness? What, in other words, is the point?

Mr. Rufo clearly sees race as a meaningless social category, one that is not based in reality; indeed, he uses the word “imposed.” Race is not imposed, but natural, organic, ordained of God. The libertarian individualist framework of “colorblindness” is precisely how we fell to the horrific depths which we now occupy. Whites like Christopher Rufo may not see themselves as white, but as Marc Hill said, the world will never see us as anything different. Only the white mind attempts to occupy a post-racial neverland. According to one recent poll (which I see no reason to dispute), only about a quarter of American whites see their origins as central to who they are.

Even in the face of an increasingly frightening and totalitarian regime of anarcho-tyranny, in which it truly is open season on white men, women, and children, when one would expect explicit expressions of white identity to flourish, we still see whites offering no politically viable resistance aside from Mr. Rufo’s bland bleating about celebrating diversity, coming to “common values” (what common values?), honoring other races’ accomplishments (what accomplishments?), and rejecting “metaphysical” racial categorization. We are not all “in this together,” and we most certainly are not all Americans, if that term has any meaning anymore.

Mr. Rufo deserves credit for mentioning the Jew Noel Ignatiev’s call to abolish the white race, but he calls it “near-genocidal.” It is actually wholly genocidal rhetoric, as is all of the other anti-white discourse that saturates the airwaves, issued forth from every power center in the fallen West. What would it take for Mr. Rufo to reclassify Ignatiev’s call to arms as fully genocidal?

Anti-anti-whiteness as illustrated by Christopher Rufo and the other Republican commentators and legislators who are beginning to feel comfortable embracing it is doomed to fail. “Critical race theory” is nothing but a thin pseudo-academic veneer upon the unfathomable and inextirpable reservoir of hatred that the other races have for whites; fighting critical theory leaves that reservoir unscathed. Recognizing anti-white animus will never be enough, not unless it is couched in explicitly pro-white language.

White genocide is already happening by means of Jewish social corrosion and the falling birthrates that are its direct consequence, the White Plague, replacement migration, and unpunished anti-white crime, but something on an even more massive scale appears to be coming. The anti-white rhetoric of the Regime increases to a fever pitch, the intensity of which seems to grow every single day. Where else will this lead but to mass slaughter?

Is the purpose of fighting “critical race theory” simply to valorize and reify the regnant egalitarian order which brought our race to its knees? Is crying “racist” really the path forward for our people? Being unapologetically and unqualifiedly pro-white is the only chance that we have for survival.