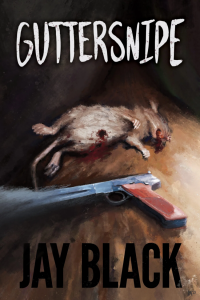 When I heard that Terror House Press was republishing Guttersnipe by Canadian author Jay Black, I could not resist pre-ordering a copy. I must admit that I had never heard of Black before, nor of his book, originally published in 2004 and only printed in 200 copies, but some residual chauvinism motivated me to get my hands on it. That and the fact that when it was published, the RCMP investigated it for potential “hate crime.”

If something was considered politically incorrect and even potentially criminal in 2004, it would not be long for the snowflakes out there suffered from traumas and called for its author to be lynched. Before that happened and the book got canceled, I needed to get my copy.

Guttersnipe is the first Canadian novella to fall into what I call the “white fiction” genre, although it stands on its edge and the author would deny such categorization. By “white fiction,” I refer to the outlet novels, sometimes victorious, always violent, that place racially conscious characters in a position of active revolt against the modern mess. This style, which has become a niche, has its classics and references. Andrew MacDonald’s two hard-hitting pieces — which may be of relative literary value — nevertheless opened a new literary field, not necessarily marked by the need to put down a blueprint for tomorrow’s revolution, but by the need to alleviate the sense of disempowerment felt by white men. It is the cathartic value of these books and not the would-be prophetic side that has made them so popular.

With authors like Harold Covington, Billy Roper, Greg Kay, and perhaps French bestseller Laurent Obertone, who uses many elements of the genre in his Guerilla series, one might think everything has been said and that the genre had been squeezed to the core; but it seems that there is always a dead angle that has not been explored. That, or this fiction resembles chick flicks: the target audience has certain desires and does not care if the plot remains more or less the same, as long as the setting and characters are refreshed.

In this case, Guttersnipe closely follows many novels in this genre: John Richter, an above-average soldier endowed with exceptional skills, is discharged after his base’s closure. From then on, his life spirals downward, Richter being incapable of finding employment due to his color. One could say that while Rambo was somehow an adaption of once-white nationalist Bo Gritz’s character, we now come back to the original roots with this plot. Except Richter does become an unlikely trigger-happy pest control technician whose sanity quickly breaks down.

We see how low someone valuable can fall when meritocracy is replaced by a quota-based affirmative action. These white men who need not apply are real people, unable to meet their needs, in an environment that has become openly hostile to them. And they call it “white privilege.”

That latter part is unfortunately no romance. White Canadians have fallen from founding fathers of a land that would fulfill their dreams to second-class citizens, and they dare not complain.

But eventually, even the most tolerant person will stop taking the abuse. Once his back is against the wall, once all the doors are suddenly closed, once he is deprived of everything, once he cannot bear the humiliation anymore, once he loses his sanity. . . then things usually turn ugly.

This is what specialists have labeled “far-right radicalization leading to violence.” But they are totally wrong about the process, and Jay Black proves it.

It is not political activism that leads to violence; quite the opposite. The path to bloodbaths is not an intellectual journey, but the consequence of powerlessness. The so-called “far-right” violence we have seen in the last two decades — marginal, but nevertheless sensationalized for propaganda reasons — has never been rational, revolutionary acts, but merely senseless acts of desperate people who could not take it anymore.

In fact, if there was a political alternative, “radicalization” would not exist. But it is exactly because there seems to be no sort of alternative to funnel people’s feelings constructively that those men resort to desperate symbolic violence.

Specialists in radicalization should take heed.

« To My Readers, Upon Having Unexpected Surgery

» The Most Dangerous Game: Capital Riddles in Western Culture