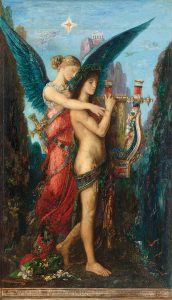 As another birthday arrives, I find myself getting closer to the dreaded age of 40. Although I still feel young, I have started to reflect on the meaning of my life and my own mortality. Some people would call this a “midlife crisis.” Yet the real crisis comes from the disenfranchisement of white men in our culture and society. For every white man with a stable career and a family, an unemployed white man is living in his mom’s basement playing video games all day. Regardless of age, the wisdom of Hesiod reminds us that one man’s crisis can be another man’s opportunity.

The role and life path for men in Western society used to be clear and self-evident. After school, a man would find a job, get his own place, and date a local woman from his area. He would then get married, have kids, and provide for his family while working at the same company until his retirement. Nowadays, this path for men seems as probable as winning the lottery or finding banned Dr. Seuss books on eBay for under $100.

At least in the US, public schools and colleges are more interested in pushing anti-white propaganda than teaching useful career skills. Even with a college degree, most men end up taking entry-level jobs that they could have gotten without going to college. These jobs barely pay enough for the gasoline and insurance required to commute to work each day. Workplaces have also become overly feminized and hostile to men. These are just some of the reasons why white men are struggling to find and maintain careers in the modern workforce.

If a young man wants to get an apartment, he will need to provide evidence of his work history and show that he earns three times the unit’s rent. Those that cannot afford their own place will have to find roommates. I have had my fair share of roommates, and believe me, it isn’t all fun and parties. While I have my own quirks and idiosyncrasies, I eventually realized that most roommates are never as reliable or considerate as you are to them. Due to all the costs and hassles of living on your own, I understand why many guys decide to live at home with their parents.

Even with a job and an apartment, white men are having a hard time dating women. Dating sites and apps give women endless choices while promoting narcissism and unrealistic expectations. The single mom of three kids (from two different fathers) can boldly proclaim on her profile that she is a strong, independent woman who doesn’t need a man. But don’t message her if you are a Trump supporter, under six feet tall, or don’t have your own place. And what about that small-town “trad-woman” that goes to church every week? I’m sure she thanks God for all the beta-male-orbiters subscribing to her Instagram, Tik-Tok, and OnlyFans accounts. After two decades of online dating, she might be ready to settle down and share her life (and STDs) with you. Sadly, many white men are starting to feel that the juice isn’t always worth the squeeze.

Whether we like it or not, sex is a major motivating factor for the male species, particularly young men in their 20s and early 30s. For a lot of men, the whole point of having a career and their own place is to have the status and resources to be intimate with women. When a large number of men become invisible to women, it is only natural for those men to give up on pursuing women. Along with the demoralization and demonization of white men, it also makes sense why some guys are also opting out of society. Why work hard for a company that hates you and will fire you for your political beliefs? Why waste most of your paycheck on an apartment with unreliable roommates and multi-cultural neighbors? Why jump through all these fiery hoops just to impress a single mom on a dating app? These are the questions I have been asking myself as my birthday brings me closer to another decade in my life.

As I get older, I often look back on my life and reflect on all the jobs, relationships, and places I have lived. Part of me worries that my past decisions and procrastinations have limited my future opportunities in having a stable career, a nice property, and my own family. While this might be my version of a pre-midlife crisis, I tend to forget that our ancestors have always faced challenges and uncertainties in life. Even in Ancient Greece, the agrarian poet Hesiod had his own version of a midlife crisis. Nevertheless, he was able to turn sour grapes into wine and poetry.

Hesiod was born around 750 BC and grew up on a farm near Mount Helicon in Ancient Greece. He gained fame early in life by winning a poetry contest. Despite his fame, he continued to work on the family farm while writing poetry in his spare time. These writings became known as the Theogony, an epic poem detailing the genealogies and stories of the Greek gods. When his father died, Hesiod worked hard to maintain the family farm. His brother Perses, however, quickly spent his financial inheritance. Jealous of Hesiod’s work ethic and success, Perses bribed the local judges to take ownership of the farm away from Hesiod and give the farm to Perses. After dedicating his entire life to maintaining the family farm, Hesiod found himself homeless, jobless, and destitute.

In the darkest period of his life, Hesiod turned to his passion of poetry. He used the stories of Prometheus and Pandora as allegories to show Perses the error of his ways. By tricking Zeus and giving fire to humanity, Prometheus was punished and bound in chains. Zeus also convinced Pandora to open her jar (mistakenly translated as “box”) to unleash all the hardships of life onto mankind. The only thing that Pandora kept in the jar was hope. Thus, mankind was destined for a hopeless life of struggle by the gods.

These writings were compiled into the poem that became known as Works and Days. Works and Days is like the Hávamál of Ancient Greece. Although not as popular as the Hávamál, Works and Days can be considered one of the world’s first almanacs. It offers a mixture of information and advice from preparing a harvest to searching for a wife. Sometimes the same advice is applied to both topics. Another goal behind the poem is to remind us that the gods hate idleness. While man is doomed to a life of struggle and hard work, those that work hard will have a better chance at turning any crisis into an opportunity.

Hesiod experienced a major crisis when his brother betrayed him and kicked him off the family farm. We face a similar crisis today, as our governments have betrayed us and alienated us from our ancestral homelands. To make matters worse, there is a lot of bitterness between the sexes that has been manufactured by our enemies. I don’t have all the answers, but Hesiod turned a crisis into an opportunity by working hard and focusing on his talents. Whether you are single, unemployed, or going through a midlife crisis, consider this time as an opportunity to focus on yourself and the things that give your life meaning and purpose.

If you don’t have a purpose in life, consider adopting a dog from your local animal shelter. Whether it is creating art or taking the dog to the bathroom, find something that gives you a reason to get out of bed in the morning. Whether it is preparing the harvest or searching for a wife, Hesiod reminds us that we must first plant the seeds of struggle before we can enjoy the fruits of success. With a little luck, you might find your next girlfriend while you are pursuing your own goals in life (or at the dog park).

I understand the hardships and difficulties that young white men face in society today. Just like them, I also have struggled with jobs, relationships, and living on my own. I had good jobs and bad jobs. I’ve had long-term relationships and plenty of horror stories from online dating. In between these periods, I also have found myself unemployed, single, and playing video games in my mom’s basement. While I enjoyed these periods of idleness, I realize that they were only short periods and breaks in between my next job, destination, and relationship. Good or bad, these are the adventures that keep life exciting for me. And if I ever experience a real midlife crisis, I’ll be sure to think of Hesiod and make the most of the opportunity.