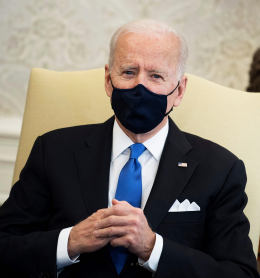 If you are searching for conclusive evidence of the total collapse of America’s educational system, search no further. I invite you to read the remarks of President Joseph Robinette Biden to the Virtual Munich Security Conference (MSC) this past February. That such a pathetic confection of banal sentimentality can be passed off unchallenged as serious thinking about any aspect of the real world confirms the utter cynicism of the ruling class and their contempt for American citizens. It suggests that the oligarchs who now run the show are rightly confident that the decades-long, cult-Marxist pedagogy practiced in our schools and universities has done its mind-crippling work. It enables this simulacrum President to slip the evidence of their ongoing usurpations past a public ignorant of history, indifferent to logic, addicted to passive entertainment with a rube-like gullibility to swallow the latest propaganda line.

To grasp the full extent of the arrogance and malevolence buried just below the surface of these astonishingly insidious remarks one should read them in their entirety. I would, however, point you to this extract from it below to get the foul taste of just how crude and deceitful they are.

We are in the midst of a fundamental debate about the future and direction of our world. We’re at an inflection point between those who argue that. . . autocracy is the best way forward. . . and those who understand that democracy is essential. . . . Historians are going to. . . write about this moment as an inflection point. . . And I believe that — every ounce of my being — that democracy will and must prevail. We must demonstrate that democracies can still deliver for our people in this changed world. Democracy doesn’t happen by accident. We have to defend it, fight for it, strengthen it, renew it. We have to prove that our model isn’t a relic of our history.

The first sentence is a flat-out lie. There is no “debate,” fundamental or otherwise, that “we are in the midst of.” Debates are not allowed these days. All the powerful organs at Biden’s disposal — the MSM, Big Tech, corporate heads, government agencies — have colluded and imposed censorship to ensure that there is no debate. The premise of a “debate” is that the outcome is decided by the better of competing narratives of the question at hand. But, we’re told that only one narrative is permitted: all others are “misinformation,” smeared as “conspiracy theories.” The New York Times has pronounced the First Amendment obsolete and assumed the benevolent role of Big Brother to protect us from those “false narratives” that undermine “our democracy.”

“Democracy.” The constant littering of this word in the talking points of the smart set is intended to make us go weak-kneed in reverence and blind to the misconduct and deceit all around us that goes unchallenged.

“Those who argue that. . . autocracy is the best way forward.” No one, of course, is making this argument: this is the straw man Biden learned from his old boss, Barack Obama. At least he spared us Obama’s “Let me be clear” trope of head-fakery. Nevertheless, Biden, whose brain appears to have been extracted and replaced by a coagulum of Bud Light and Hamburger Helper, dispenses howlers like this with no embarrassment. He can because no one in the establishment cares what he says — no matter how incoherent or deranged, it is a useful distraction from what they are up to.

Ironic is that every aspect of his Presidency forms a compelling image of autocracy. His inauguration, with the concertina wire, the barriers, and the vetted army troops to cosset the huddled masked-men on the inaugural platform made you think of Latin American generals, post-coup, installing the chosen “strongman.” The only thing missing was a general’s uniform on Biden with lots of braids and medals and troops goose-stepping down Pennsylvania Avenue. Meanwhile, our KGB agents continue to hunt down the “enemies of democracy” who showed up at the Capitol to protest on January 6. The Capitol now appears to be in permanent lockdown to protect it from the demos who make up “our democracy.”

But to continue. We must consider “every ounce of my being,” ponder the weightiness of all those ounces of sleazy decrepitude, and speculate about what they could have to do with this frenzied outpouring about “democracy.”

You will have to admit: “democracy” has never before received such a fulsome, albeit mystifying tribute.

“Is essential.” For what? “Will and must prevail.” Or what? “Can still deliver [what?] for our people in this changed [in what way?] world.” “Doesn’t happen by accident.”

Out pours a succession of active verbs — “defend,” “fight,” “strengthen,” “renew” — that “we” must be about to “prove” that “democracy” is not “a relic of our history.” Who exactly the militant, energized “we” are, charged to rescue “our model” from “relic-hood,” remained undisclosed.

Other than confusion, fatigue, and embarrassment, what else would someone be left with after hearing this? As this clump of verbiage heaved itself out of Biden, delivered with his usual blustery and fake earnestness, you can’t help but wonder what thoughts were going through the minds of his audience of “the world’s most senior decision-makers.” This is the euphemism for “rich, powerful oligarchs” employed on the MSC website. Angela Merkel, Emmanuel Macron, Boris Johnson, António Guterres, Ursula von der Leyen, John F. Kerry, and Bill Gates were among the most illustrious participants — a veritable rouges gallery of famous, ambitious mischief-makers loaded up with way too much power and many plans to make us miserable for our own good.

Biden’s remarks to the “world’s most senior decision-makers” are worth careful inspection because they perfectly represent the corruption of language used by the ruling class elites.

The words they chose and the sentences they compose are not intended to illuminate any aspect of reality. Their language is a tool of obfuscation and deception. They employ high-minded abstractions to disguise the premising of their decisions and policy-making based entirely on calculations of self-interest and power maximization. All of the belabored, annoying “democracy” talk in this gathering of oligarchs is a smokescreen for a step up in further usurpation. “Democracy” is the crown jewel in the mumbo jumbo they use to distract us from the wreckage they are about. The word itself, devoid of meaning, ritualistically chanted, remains the favorite verbal charm of the recently installed Pied Piper of Babylon on the Potomac. Thus, we arrive at Biden’s dopey peroration: “So let’s get together and demonstrate to our great, great-grandchildren, when they read about us, that democracy — democracy — democracy functions and works, and together, there is nothing we can’t do. So let’s get working.”

Here is a sample: “I’ve ordered the halting of withdrawal of American troops from Germany. I’m also lifting the cap imposed by the previous administration on the number of U.S. forces able to be based in Germany.”

Why do we need any American troops in Germany? Why should American taxpayers shell out to protect Germans in rich, powerful Germany from non-existent foreign enemies? Because without an important someone far away who needs “protection,” the myrmidons who run the US Government’s defense industry would have to shrink it down to a size that was commensurate with the actual needs of the American people who have to pay for it. And that works well for the latter-day German Junkerettes who are still searching their closets and dragging out the Nazis in hiding. They are happy to let the Americans pretend to protect them and keep “democracy alive” in places where it has long stopped breathing. It frees them up to finish off traditional Deutschland, open the gates and turn it into a multicultural zoo — yes, and to purge der deutschen Sprache of gender distinctions. It’s a win for Führerin Merkel. It’s a win for the boys and girls members of the invitation-only Council of Foreign Relations club.

Back home, though, here is what “let’s get working” means. Forget “democracy.” How do you spell “serfdom”? “My first presidential national security memorandum focused on surging health and humanitarian responses to defeat COVID-19 and to better prevent and prepare for the next pandemic.”

If this doesn’t scare the bejesus out of you, nothing will. The lockdowns and massive wealth transfers response to COVID-19 has yet to succeed in “defeating” the virus. But Old White Joe is already talking about the “next pandemic” on the horizon. What do you think that “to better prevent and prepare” for it is going to mean for your daily life in “our democracy” — you know, your freedom of association, freedom of speech, freedom to travel, freedom to pursue your livelihood and operate your business? The “19” version was a dress rehearsal for what will be coming down the pike. You don’t have to be clairvoyant to predict that the draconian measures already in place to justify combating the coronavirus will be rolled out and muscled up whenever someone somewhere starts coughing or gets a touch of what the Germans call der Durchfall.

Yes, we are talking war, comrades. In a recent White House briefing, Biden unveiled his “wartime” strategy to defeat the coronavirus. “This is a wartime undertaking,” he said. Particularly ominous if you reflect on this announcement for a moment is the fact that war brings out the worst in people who already are the sorts who should never be trusted: professional politicians. Woodrow Wilson, FDR, LBJ, Nixon, George W. Bush — they all used war to cover spectacular abuses of power and to rain down death and destruction in countries that posed no threat to the American people. Vietnam, anyone?

Now, yet another “war” from another conniving “boss” with a fifty-year history of proving that you should not believe a word he says. “Help is on the way,” he says. Meanwhile, 900,000 people filed for unemployment the week before this “declaration of war.”

Is the “enemy” in this war a virus, or the “deplorables” that put Trump in office who now must be taught who really is in charge?

Biden’s “war on corona” will join George W. Bush’s “war on terrorism,” yet another “war” that never ends, a war that loads up the war-makers with more arbitrary power and strips away your freedoms and your opportunities to live a normal life.

As I have previously argued, the “public health dictatorship” is fully in place. Resisting it begins with resisting the language used to disguise the tyranny, by refusing to believe the declarations and promises of men and women whose careers are built on lies. The propaganda machine seems to be all-powerful, but as The Saker points out in a recent Unz post, the last two decades of U.S. governance resemble the final years of the Soviet Union. Lying systems eventually collapse. There is hope in resistance.

» Crisis of the Two Constitutions & the Failure of Conservatism