Back to Normal? I Told You So 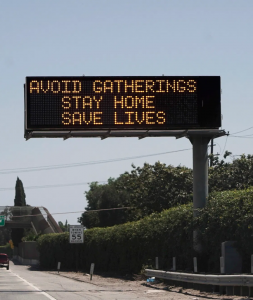 I told you so.

Savory words in whatever language you say them in. These days I’ve been indulging myself. With a touch of Schadenfreude, I’ve been tactlessly reminding my friends and acquaintances of their hopeless naiveté. That would be a little over a year ago. They were regarding the coronavirus threat and the “remedies” as temporary annoyances after which “normal” would return unscathed in a few, short months. When I said: “‘The crisis’ is not going to be over for a very long time, maybe never” they looked back at me like I was the village idiot. “Fine,” I thought. “A prophet is not without honor, but in his own country, and among his own kin, and in his own house.”

A year has gone by, and . . . well? As a neophyte prophet, so far, so good. No cavalry and “back to normal” to our rescue. And, despite the vaccines, the defenestration of Trump, the installation of Hua Guofeng, I mean Joe Biden at Ritalin-assisted warp speed discharging a flood of decrees, we’re already looking at “normal.” And it looks like poor Uncle Bob on a slab at the morgue after his autopsy.

It should not be that hard to understand why the new normal is not going to resemble the old one. Yet obstacles have been in place that make it not so obvious. To get a clear-eyed look at the massive scope of the change requires (a) coming to grips with some realities so ugly that most optimistically inclined, MSM-conditioned Americans are loath to contemplate them, and (b) the recognition of two fundamental features of political power and drawing the implications from it that takes a level of cynical realism and a dose of courage to embrace.

First, the ugly realities. 2020 brought the lockdowns, their economic devastation, the social isolation with its pathologies, and the fear reigned down by the 24-by-7 CNN talking heads shrieking “death is stalking us everywhere.” The routines, habits, customs, and relationships that give the lives of most Americans sustenance and meaning have been permanently ruptured by the maniacs of the ruling class. Millions of people who lived independently now depend on government printing-press money. To use an accurate but ugly word, the government is “beggaring” its people. And as the old saw goes: “Beggars can’t be choosers,” which is the whole point, to be brutally honest about it. One has to be willfully blind not to see the massive shift of power and resources from the many to the few. Do the few who have made the rules to make us, the many, behave during this crisis have any interest or incentives to reverse that trend? Occasionally, a bold, independent source of news reporting gives us an inside glimpse of those in the power set in flaunting disregard of the rules they set for the rest of us. Our organizations, institutions, schools, churches have fallen under the arbitrarily administered supervision of state and local “authorities” with a bewildering, inconsistent array of restrictions — more shifting away of power and stripping away of independence.

Economic independence, freedom to associate, and confidence in the competence of the authorities are not the sorts of things that can overnight be whisked away and then returned intact and undamaged. Not that returning them in any recognizable form is what the bosses are contemplating. They have us, as Rudyard Kipling put it, “by the short hairs.” No reason they would let go other than goodwill and decency. Pause a moment to stop laughing, then continue reading.

We’re told the vaccines are the vehicles of “back to normal.” This brings us to that closer look at political power. With that, we can understand why “back to normal” is a pipe dream.

Two bedrock truths about power should be noted here. First, politicians in power devote themselves, first and foremost, not to the wellbeing of their constituents, but to staying in power. The only way they relinquish their power is by being forced to, which is why we have elections. The problem with our elections is that the politicians themselves have enormous control over the election processes — their financing, the selection process of candidates, the way the media covers them. They keep recycling the old chestnut, “I’ll be different,” and it seems to work. This also seems to be a good argument for scoffing whenever we hear them lauding “our democracy.” As Mark Twain may have once quipped: “If voting made any difference, they wouldn’t let us do it.” So painfully true. Pondering the national election cycles confirms what we already know: the outcomes have little to do with the way we get to lead our lives. Rather, elections are an orchestrated distraction from the usual hanky-panky of the oligarchs as they go about their business of “punishing their enemies and rewarding their friends,” as President Obama put it during his stint in office.

Consider some of those perched at the top who have devoted decades to staying in power and specifically note how old they are. Review this list and then ask yourself: Should we call this government we live under “a democracy” or a “geriatric oligarchy”? President Joe Biden, 78; Speaker of the House Nancy Pelosi, 80; Senate Majority Leader Chuck Schumer, 70; Senate Minority Leader Mitch McConnell, 78; House Majority Leader Steny Hoyer, 81; Majority House Whip James Clyburn, 80; California Senator Diane Feinstein, 87 and seeking reelection; Iowa Senator Chuck Grassley, 87; Alabama Senator Richard Shelby, 86; Oklahoma Senator Jim Inhofe, 86.

The average age for U.S. Senators is 62, which coincidentally and ironically is the age American voters can begin taking Social Security retirement benefits. We, the ruled over, retire at an appropriate age: they, the rulers, refuse and continue to punish us while they pretend to care. I forgot to mention Maxine Waters: that circus-tent-performing harridan is 82. In a sane universe, she’d be the star attraction in the dementia unit at Crazy Horse Retirement Village.

At advanced ages far beyond which most Americans move into retirement, this antique leadership menagerie with so many obvious signs of senescence and decrepitude maintains its jealous, tenacious grasp on power. Because? Because they can’t help themselves; just like dogs scratch fleas and return to their vomit, it’s what they do. “As a dog returns to his vomit, so a fool repeats his folly.” Only death or complete collapse into senility will rid us of these wheeler-dealers in their dotage.

The second bedrock truth about power is: no politician, no matter how honest, upright and benevolent, will ever say: “Vote for me; I will do less. I want less power.” It’s axiomatic: Politicians are in the business of accumulating power. Whatever power they get they keep and work overtime to augment it. Ask yourself: are there fewer laws, rules, regulations, restrictions, today than there were ten or twenty years ago? Do you think in ten years there will be fewer? Will all of these laws and regulations improve the quality of your life?

This truth is what should convince you that the new “normal” is going to be very different than the old one. The lockdowns were a test case to see how sellable “public health” is as a cover to replace the rule of law by executive decree — more power. It was astonishingly easy. By mid-2020, another antique, the 80-year-old career bureaucrat Anthony Fauci, slithered out of anonymity and stepped into his new assignment as de facto national dictator with a supporting cast of governors, mayors, and local officials thrilled beyond their wildest dreams at the sudden, broad scope of their “bossing people around” powers. The dictator-chick of Michigan, Gretchen Whitmer, who goes by “Governor,” released page upon page of ukases that had the coherence and consistency you’d find in a conversation with inmates in an insane asylum. “Jet skis, motorboats or other comparable watercraft are prohibited, while canoes, sailboats and kayaks are allowed.” “Prohibited” and “allowed” — a schoolmarm drunk with power. My most indelible memory of 2020 is driving north on an empty Interstate 75 with the huge signs above the overpasses flashing “Stay Home.”

Fauci’s 2019 salary, by the way, was reported by Forbes at $417,608 in 2019, making him the highest-paid federal employee for that year, more even than his boss Donald Trump at $400,000. Fauci and the edict-crazed junior overlords collected their paychecks while small business collapsed and service people and blue-collar workers filed for employment and prepared for the government handouts.

The lessons that the oligarchs took away from 2020 were important and far-ranging. First, they saw how easy it was for them to make Americans behave as pod-people, masked-up and fearful, scurrying about in public, then retreating, as ordered, to the safety of their nests, like rodents hoping not to disturb the slumber of Mr. Covid Cat.

About the prophylactic effectiveness of the masking and social distancing, I profess ignorance. Beyond the contagion concerns, what I can say is that the level of moralizing and propagandizing relating to these practices arouse the suspicion that the masks, particularly, were intended to become visible evidence of probity, badges of moral certification, the absence of which would identify a public health menace or “enemy of the state” and bring down the shaming ritual and even punishment. Big journalism, big business, and the government propaganda organs joined together in perfect alignment with wartime patriotic slogans with Orwellian gems like “Coming together while standing apart.”

It has the same logical consistency as “War is Peace.”

The worst long-term implications of the success of the 2020 power grab are: (a) The oligarchs suddenly have a lot more power than they did a short time ago, (b) they are not about to relinquish any of it without being forced to, and (c) they have a precedent to use it now whenever they care to lock down the economy and curtail the freedoms of everyday social interaction that until a year ago were taken for granted. Rahm Emmanuel, President Obama’s Chief of Staff, is today widely quoted with this: “You never let a serious crisis go to waste. And what I mean by that, it’s an opportunity to do things you think you could not do before.” The coronavirus crises were a grand opportunity that the ruling class jumped on and, as we can see, did all sorts of things it never did before. Much of what they have done will not be undone.

The “new normal” will be a relaxing and contracting of “the grip,” a rolling wave of the bosses doing things they “could not do before” — lockdowns, restrictions, and economic redistribution that favors their friends and punishes their enemies. As I have argued previously: all the conditions for a public health dictatorship are in place: a massive propaganda government and mass media campaign focusing on an “emergency” crisis that justifies “extraordinary powers”; demonization of skeptics; a massive shift of resources and power; and the promise of a panacea to make the crisis disappear.

This the “new normal.” It is here and firmly established. It is called “a public health dictatorship.”