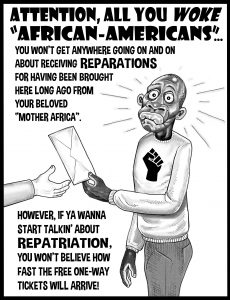 It should be obvious to any sober observer that the main problem with black people is black people.

Even though it has been mathematically established that black Americans drain more money from the public cookie jar than they contribute to it, a pesky myth persists that they are somehow being cheated out of their “fair share” of America’s massive wealth. It has become a national article of faith that any possible economic disparities between Bantus and Euros can’t possibly be explained by the fact that intelligence testing consistently confirms that, by and large, blacks are a relatively dimwitted breed.

It wasn’t enough that 600,000 or so white soldiers lost their lives in a war that had little to do with slavery but, since that they’ll continue insisting was all about slavery even though they never show the slightest gratitude to all those “dead white men,” we’ll play dumb and pretend they all died to free the slaves.

It’s not enough that trillions and trillions have already been poured into black ghettos with little progress to show for it.

It’s not enough that blacks live 20 years longer and have an annual per-capita income at least ten times as high as they’d have in any of the ancestral homelands whence they were plucked.

No, they’re still flappin’ their gums about reparations.

The corpse of George Floyd, that fentanyl-ingesting armed robber of a pregnant black woman, is being shamelessly pimped in one of the largest money-grifting scams in American history.

Once again, Congress is holding another hearing on H.R. 40, which was concocted in 1989 by black congressman John Conyers, who named it after the “40 acres and a mule” promise — which, if you were unaware, was merely a Special Field Order issued by General William Tecumseh Sherman four months before the Civil War and was never a federal law signed by any US president. And you are almost definitely unaware that many white ex-indentured servants were promised “50 acres and a hoe” but never received either. It’s the early American version of the $2,000 COVID stimulus checks that we won’t get this year.

H.R. 40 would establish a commission to study the Reparations Question and “consider a national apology,” as if the nation hasn’t been apologizing nonstop since long before any of us were born.

Rep. Sheila Jackson Lee — who once complained that hurricane names were too “lily-white” and that astronaut Neil Armstrong planted a flag on Mars — appeared at a hearing to show pictures of brutalized black slaves and black lynching victims, which, though undoubtedly gruesome, are likely nowhere near as unpleasant as pictures of her genitals: “This was our life, the back of a beaten slave. This was our life into the 20th century, hangings of African-Americans, men and women. This was our life, when we were in public display, brutalized.”

Hey, black people — come up with some new material.

Speakers at a recent hearing on H.R. 40 noted that the word “reparations” is rooted in the word “repair.” Yeah, I know. I covered this years ago. Being black in America is a freakin’ upgrade compared to being black in Africa. If you’d like to be “repaired” back to the conditions you’d “enjoy” if the “damage” had never happened, I’m sure we can arrange it.

Both culturally and economically, America is being covered in blackface. Why, it seems like only five years ago or so that legions of ethnomasochistic trust-fund white communists from the ’burbs equated all things corporate with WASPS and the “right-wing.” But the ivory dominoes fell quickly; nowadays, corporations are so woke, I hope it gives them a seizure.

“Get ready for Proud Puffs, a chocolate-flavored, vegan cereal formed in the shape of a Black fist,” bellows the HuffPo in what I predict will be the runaway winner for Funniest Subhead of 2021. Nic King is a 30-something black man who claims he had trouble sleeping last summer in the wake of George Floyd dying of a fentanyl overdose. He decided that the best way to serve the black community was to create a black-power cereal:

Cool. Does that apply to white people, too?

I thought about his product — a bowlful of tiny black fists that would soon be drowned in white milk — then realized that the tiny black fists were turning the milk brown, which fits the black agenda like a finely tailored pimp suit.

“Walmart is working with breweries across the South” to push a beer called “Black is Beautiful,” a rich, dark stout intended to “spread racial injustice awareness.” According to Black is Beautiful’s black brewer:

Our Black is Beautiful stout is both bold and decadent. We rested the massive base on smooth, Ugandan vanilla beans before dousing it with French Artisan caramel syrup and sprinkling with flaked sea salt. Aromas of salted caramel lattes greet the nose with hints of crème brulée on the palate.

As a white man, I object to their use of vanilla beans, Ugandan or not.

Regarding the ongoing and accelerating corporate de-whitening of the past, the H1B pajeets at Disney’s Ministry of Truth are busy inserting trigger warnings at the beginning of such infamously white-nationalist children’s entertainment as Dumbo, Peter Pan, The Aristocats, Swiss Family Robinson, and The Muppet Show. Only adults are allowed to view such “offensive content” nowadays:

This programme includes negative depictions and/or mistreatment of people or cultures. These stereotypes were wrong then and are wrong now. Rather than remove this content, we want to acknowledge its harmful impact, learn from it and spark conversation to create a more inclusive future together.

For the last few months, I’ve been tossing around a screenplay idea about a “Great White Power Shark” that only kills black people. After I’m done with that script, I intend to dive right into writing my first draft of The Extremely Racist Swiss Family Robinson.

I remember way back when the Today show featured a corpulent-but-cuddly Al Roker acting like a nice, likable, completely compliant Negro. Nowadays, the show’s website features articles with titles such as “How to be an anti-racist and what new steps you should take,” written by a homely white woman with Chiclet-sized teeth.

I recall when Forbes magazine was centered around topics such as, well, capitalism and making money. Now its website runs articles about “Why DEI [Diversity, Equity, and Inclusion] And Anti-Racism Work Needs To Decenter Whiteness” written by a black woman with hair braids and an unpronounceable name.

The magazine Fast Company bills itself as “the future of business.” Last week their site published an article by a certain Nate Berg titled “More than 75% of real estate executives are white men. Here’s how to diversify.”

Also last week, it was leaked that management at Coca-Cola sent an email to workers announcing a course on “whiteness, white fragility [and] . . . racial justice. Screenshots from the course include the following entreaties:

How about I drink Pepsi for the rest of my life?

What’s even sicker than the fact that they’re pushing this bullshit in corporate offices is the fact that they’re peddling it in schools. Manhattan’s East Side Community High School has distributed literature to parents encouraging white people to be “traitors” to their own race. The handouts allegedly include a ranking list written by a sour-pussed black “Professor of African American Studies” called “The 8 White Identities,” which places us all on a spectrum ranging from “White Supremacist” to “White Abolitionist.” Since the school is 55% Hispanic and only 18% white — And since in the new West Side Story scenario that is modern New York, the Jets are no longer permitted to defend themselves against the Sharks — the end result will likely not be racial harmony, but lots of white kids with black eyes.

The world was a far better place when “whiteness” was more of a problem for nonwhites than for white people.

Counter-Currents Radio Podcast No. 323 Grace Under Pressure: Life as a Thought Criminal »