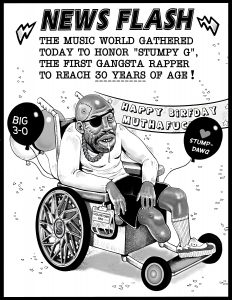 After the Atlanta-based one-hit hip-hop wunderkind who goes by the silly name of “Silento” was arrested and charged last week with murdering his cousin, his publicist referred to him as a “beautiful soul.”

To clarify, she wasn’t talking about the murdered cousin. She was talking about his accused killer, 23-year-old Ricky Lamar Hawk, a recording artist specialized in urban mating songs of the primitive call-and-response type. Silento’s one brief desperate taste of fame came six years ago with the viral dance hit “Watch Me (Whip/Nae Nae),” which went to #3 on the Billboard Hot 100. As of this writing, the song’s official video has garnered nearly TWO BILLION views on YouTube.

Now, if a song called “Watch Me (Whip/Nae Nae)” that comes complete with its own special dance sounds dumb, trust me when I say it’s dumber than you can imagine. For one thing — and I could only take about 20 seconds of it before switching it off and saying, “This is wrong, I must not tolerate this” — it seems as if “Watch Me (Whip/Nae Nae)” is the entire lyric sheet for this so-called “song.” The video shows Mr. Silento and a high-school auditorium of eager-but-impaired young black teens chanting and thrusting in tandem with an insectoid frenzy as if they’re all trying to intimidate the hapless residents of a rival African village.

However, Ricky “Silento” Hawk failed to properly ride the giant ding-dong of clout that the “Nae Nae” song gave him. It took him another three years before he could get his shit together enough to release his debut album, Fresh Outta High School. When that failed to make much of a splash, he rushed out a sequel five months later with the ingenious title of Fresh Outta High School 2. When he found no smashing success with that one, he sought attention by granting interviews about what a Depressed Young Black Man he was:

Last October in Georgia, he was clocked by police at 143 miles per hour on Interstate 85. According to the police report, when he first handed his driver’s license over to the arresting officer, he said “We ain’t do nothing wrong.” Then he told the officer that he had just left a nightclub and was being followed: “If there is like 10 cars following me, I can do 143 because I am not a regular person, and you could go look on your computer and it would tell you that.”

For rappers, though, it’s a pretty regular occurrence.

After his arrest, Silento’s publicist, an overweight black woman named Chanel Hudson, pecked out the following tear-jerker on Instagram:

Please send my client Silento some positive vibrations. Over the past several years, Ricky has been suffering immensely from a series of mental health illnesses. We will continue in his efforts of treatment, but we ask in the meantime the public uplift him and his family in immediate prayer & positive energy!! Ricky is a beautiful soul, and we hope that the same people who came up whippin’ & nay naying with him, continue to support him and lifted in prayer!! God bless. . . .’”

God bless you, too, Chanel.

My opinion as an impenitent and nearly senile white man is that if black lives really mattered to the black community — and I’m talking to YOU, black community, don’t act like I don’t know you’re reading this — they would forbid young black men from becoming rappers.

In the brief flurry of journalistic energy I expended to do basic background research for this article, I uncovered at least 15 cases where rappers were convicted of murder.

The funniest such case will always be that of C-Murder. He was born Corey Miller, the brother of kind-of-a-big-deal Louisiana record producer Master P. One night at a Louisiana club, C-Murder beat and shot a 16-year-old fan of his to death. He was convicted of second-degree murder and sentenced to life. In an apparent sign of his having mellowed, he’s changed his handle to C-Miller.

In 2002, a Texas-based rapper called Big Lurch was dusted out of his measly brains on PCP when he murdered his female roommate, ripped out her lungs, and ran naked and bloody into the streets. Apparently, he’d chewed off pieces of his victim’s face, as her remains were found in his stomach.

Apparently, though, it’s much more dangerous to be a rapper than to be on a rapper’s bad side. Wikipedia actually has a “List of murdered hip-hop musicians.” As of this writing, they list 49 murdered hippety-hoppers, from Scott La Rock in August 1987 all the way to the latest, King Von, in November 2020.

I know this will sound very cold and perhaps a tad sadistic, but there’s a dark streak of OCD deep within my soul that would allow me great comfort if the number totaled 50 rather than 49. It’s a much more rounded-off and agreeable number. I’m not saying that anyone should kill hip-hop artists, because that is not only clearly wrong, it’s illegal. It’s just sort of a numbers thing happening inside my head, that’s all. It has nothing to do with wishing suffering or loss of life upon other humans.

But according to black-lifestyle bible XXL magazine, to date 77 hip-hop artists have been murdered, a number which provides even further vexation to the numerically obsessive-compulsive, because at that point there will be no relief until the tally reaches 100.

Sometimes a promising young rapper will meet his demise when a fight breaks out over a water pistol.

Or let’s say a rapper who is barely 18 will run his mouth and get shot to death by someone twice his age over an argument involving a video game.

Or a 32-year-old rapper — which is 100 in Rapper Years — gets shot and killed in Detroit after a fight broke out involving a billiards game.

And let us never forget the mystery-laden murders of Tupac and Biggie, which will forever be the Twin Holocausts of Hip-Hop.

I do not profess to know the guilt of Ricky Lamar “Silento” Hawk in his murder case. If there were any justice, he would have been sent back to Africa on a boat made of bamboo leaves simply for making that “Nae Nae” video.

Mind you, this doesn’t count the aspiring rappers. Everyone I’ve mentioned so far at least has some measure of notoriety or chart success.

At last count, there were 42 million black people in the USA. Since it’s usually men killing men in order to get exclusive access to the women, I’ll estimate that leaves, oh, 18 million black men currently remaining in America.

Due to my extensive experiences from decades of taking public transportation with black people, I can state with confidence that at any given time, 40% of black males are aspiring rappers.

Unless we, as a nation, get a handle on this crisis that’s killing young black men, we’re looking at millions of dead rappers.