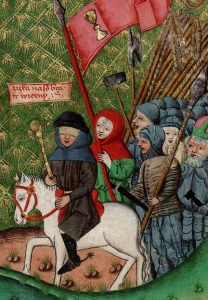 I have always wanted to visit and explore Prague’s medieval sites and classic breweries, but with ongoing COVID-19 restrictions and lockdowns, it seems that travel is becoming another freedom that we are slowly losing. Nevertheless, there have been many Czech dissidents in history that risked everything to stand up for what they believed in. Their perseverance reminds me that our journeys in life are just as important as the destinations we are trying to reach.

I always had an appreciation for Czech food, culture, and music. When I started drinking beer, I always preferred the Czech-style pilsners, and I’d pick up kolache pastries for breakfast when I lived and worked in Texas. During the Christmas season in Germany, I would watch Czech fairytale films (pohádky) from the 1970s. I also enjoyed listening to various Czech heavy metal bands such as Root, Master’s Hammer, and Maniac Butcher (RIP Vladimír Dědek). My interest in Czech history has grown in the last two years as I enjoyed the Hussite Trilogy by Andrzej Sapkowski and Kingdom Come: Deliverance. Both the books and the video game take place in the early 15th century and mention Jan Hus.

Jan Hus was a Czech theologian who opposed many of the practices of the Catholic Church in Bohemia. After being excommunicated by Pope Alexander V, Hus was sent into exile by Antipope John XXIII. Despite these punishments, Hus continued preaching his sermons. After being summoned to discuss his views at the Council of Constance, Hus was immediately arrested and imprisoned. When given the chance to recant his views, he proclaimed that nothing would stop him from speaking the truth. Hus was eventually charged with heresy and burned at the stake on July 6th, 1415. After his execution, his Hussite followers refused to support a Catholic monarch and fought several crusades against them between 1419 and 1431. These conflicts would be known as the Hussite Wars. Hus’ death inspired his followers to fight for what they believed in.

Hus would not be the only Czech dissident to burn for his beliefs, as a handful of activists committed self-immolation to protest Soviet occupation following the Prague Spring. The Prague Spring was a period of social reforms implemented by Alexander Dubček in Czechoslovakia in 1968. After several months of relaxed regulations, Soviet troops cracked down on the reforms. Resistance developed throughout the country with intermittent violence. During this time, one young college student decided to take matters into his own hands.

As an act of defiance, Jan Palach wrote a letter stating that he would commit self-immolation to protest Soviet occupation and its demoralization of the Czech people. As promised, Palach went to Prague’s Wenceslas Square and set himself on fire on January 16, 1969. He died three days later. One month later, a college student named Jan Zajíc set himself on fire in protest of the occupation and died. Another man named Evžen Plocek committed self-immolation on April 4, 1969. By this time, the press was no longer reporting these protest suicides. After the troops left, the reforms made during the Prague Spring were reversed and political censorship increased. Despite the censorship, these protest suicides greatly influenced the work of Václav Havel.

Havel originally wrote plays that mocked and ridiculed life under communism. Both The Garden Party and The Memorandum criticized the bureaucracy of the Communist Party and their futile attempts to censor ideas and speech. After taking part in the Prague Spring, Havel was blacklisted and banned from working in theatre. Havel continued to write plays under various pen names while working at a brewery. After the arrest of a Czech rock band, Havel decided to start using his real name again. Along with a handful of other Czech writers and dissidents, Havel signed his name to a manifesto called Charter 77.

Charter 77 was published with over 200 signatures on January 6, 1977. Havel and a few other dissidents were detained while transporting copies of this manifesto to the Federal Assembly. The government response was quick and harsh. The state-run press called Havel a traitor and a criminal. Most of the individuals that signed the manifesto lost their jobs and were arrested. The secret police forced some to spy on their friends and family. Persecution of Charter 77 supporters continued into the 1980s. Havel himself was arrested numerous times and spent four years in jail from 1979 to 1983. Before going to jail, Havel would write one of the most important political essays of his generation.

Havel wrote “The Power of the Powerless” in 1978. The essay describes various aspects of life under communist rule and how ordinary people are forced to pay lip service to the regime to survive. Havel gives the example of the greengrocer who puts a communist sign in his store window, not because he believes in the sign’s slogan, but to keep the government from harassing him and his family. Havel also explains how the average person can overcome their presumed powerlessness by building networks of opposition. Although the essay was immediately censored, it eventually circulated throughout the world and was translated into various languages. It would even inspire the events that would lead to the Velvet Revolution.

Communist police suppressed a student protest in Prague on November 17th, 1989. The protests continued each day and the crowds kept getting bigger, eventually spreading across the country and turning into an anti-communist movement. Due to the growing pressure from this movement, the Communist Party of Czechoslovakia announced the end of the one-party state on November 28th, 1989. This path to independence became known as the Velvet Revolution. Havel became the President of Czechoslovakia in 1989, and after partition in 1992, he became the first President of the Czech Republic in 1993. With patience and perseverance, Havel was able to perform his plays in the Czech theatres once again before he passed away in 2011.

From the Holy Roman Empire to the Iron Curtain, Czech dissidents have risked their lives to stand up for their beliefs, their land, and their freedom. Jan Hus died for his beliefs, but his followers lived on and protected their land from invaders. Activists like Jan Palach gave their lives to protest the invasion of their country. Their actions inspired writers like Václav Havel to become dissidents that would live to see independence. Regardless of the destination, all of them had an important part to play on their journey.

I do not want our people to get burned at the stake for their beliefs. I do not want our people setting themselves on fire to protest the invasions of their countries. I want our people to live and enjoy their lives. Unfortunately, we are living in an age where white people are persecuted for their beliefs and white countries are being invaded. There will not be a single solution that will solve all our problems. Regardless, we will continue the journey that our ancestors started. No matter how bad things get, we will survive, adapt, and carry on. The sacrifices of the past paved the way for the dissidents of today. With a little patience and perseverance, white people around the world will be able to stand up for their lands, their sovereignty, and their identity.

I sometimes regret not traveling to Prague when I had the chance a few years ago. The way things are going now, it might be a long time before I can travel anywhere. Whether I make it to Prague or not, the thoughts of traveling there will give me something to look forward to in the future. Until then, I can listen to my favorite Czech heavy metal bands and play the expansion packs of Kingdom Come: Deliverance to hold me over. I might even spend a little time learning some Czech grammar. It just might come in handy when asking for directions to the monuments of Jan Hus, Jan Palach, and Václav Havel. With a little patience and perseverance, I know that the journey will be just as rewarding as the destination.

« An American Storm Before the Storm

» Why Shouldn’t Q Be Black?