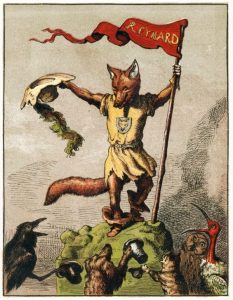 When I took the garbage out earlier this week, I saw a fox crossing the street. We stared at each other for a prolonged moment before it ran off. During that encounter, I felt a strange connection with this wild animal. As much as I related to wolves in the past, I think that modern dissidents share some characteristics with foxes. Just as every fox looks after its own tail, each person in our community can outfox our enemies and adapt to our changing environments.

During my high school years, I became fascinated with wolves. This was probably due to the music I was listening to — black metal imagery and lyrics romanticize wolves in nature. Just like a lone wolf, I also preferred solitude, independence, and doing things on my own. Whenever I was asked to describe my spirit animal or the animal that most resembled myself, my answer was always the wolf. But since my encounter with the fox this week, I have been thinking about the nature of foxes and their portrayal in language, folklore, and literature.

Foxes are omnivorous animals that can be found in nature and urban areas. Foxes rely on their stealth and cleverness to find food, outwit predators, and survive their environments. They are not pack animals like wolves and often attack their prey alone. The fox is consequently portrayed in many cultures as a symbol of cleverness, trickery, and mischief.

Idiomatically, “outfox” means to outsmart or outwit someone, and “crazy as a fox” means to appear insane while being clever and methodical behind the façade. The proverb “the fox can do what the lion cannot” has multiple meanings, but I take it as a reminder that intelligence and strategy are sometimes more important than power and strength. This concept is depicted in the tales of Reynard the Fox.

Reynard the Fox is a character that appears throughout European folklore and medieval literature. These stories follow the adventures of an anthropomorphic fox named Reynard deceiving other animals while avoiding retaliation. Reynard’s main enemy is his uncle Isengrim. Despite his best efforts, Isengrim is often the victim of Reynard’s mischief. Authors could use Reynard’s character as a trickster in these tales to criticize the religious and political issues of their time.

Reynard first appeared in a medieval Latin poem called Ysengrimus. Written by a 12th-century poet named Nivardus, Ysengrimus combined many of the tales about Reynard from French and Dutch folklore. These tales were also written in Old French by Pierre de Saint-Cloud in his epic poem Le Roman de Renart. In the 13th century, Willem Die Madoc wrote a Dutch version titled Van Den Vos Reynaerde (Of Reynard the Fox). This version was translated into other languages and inspired Goethe to write Reinecke Fuchs, an epic poem published in 1794. In later versions of these tales, Reynard is portrayed as both a trickster and a heroic figure.

Michel Rodange was a Luxembourgish author who wanted to create a poem that represented his people and his homeland. He took Goethe’s poem about Reynard and changed the setting to Luxembourg. Rodange also used the regional dialects of his homeland to depict Reynard and the other characters. Rodange published this work in 1872 under the title Renert oder de Fuuß am Frack an a Mansgrëßt (also referred to as Renert). It is regarded as the national epic of Luxembourg. An alternative version of these tales came from Robert Van Genechten, a person who outfoxed the ruling elite of his time.

Genechten was a Belgian-born Dutch writer who moved back and forth between Belgium and the Netherlands to avoid political persecution. In 1937, Genechten started writing articles about Reynard the Fox and how these classic tales related to the social and cultural issues of his time. In 1941, he compiled these articles into a book called Van Den Vos Reynaerde. A cartoon based on Genechten’s book was created two years later but was never officially released.

Both the book and the cartoon take place in an anthropomorphic town where each animal performs a different role and function. One day, a rhino comes to town and declares that all the animals should be considered equal. The rhino convinces the town to ignore the traditional differences of the past and to implement new laws that enforce equality. These new rules end up creating chaos and havoc in the town. Fortunately, Reynard the Fox comes up with a plan to trick the rhino and save the town. Just like Reynard, Genechten also used tricks to avoid persecution for many years. When Genechten was finally arrested and sentenced to death, he outfoxed the prison guards and left this world by his own hands.

The Trump supporters who attended the Capitol occupation on January 6 are now in a similar position, waiting in jail cells and facing federal charges. Trump abandoned his supporters and ultimately betrayed them. Trump should have pardoned every single person that was arrested for entering the Capitol Building. They fell into a trap and were tricked into thinking that they lived in a country that still protected their right to protest. Those Trump supporters may not share all of our opinions or worldview, but what happened to them could easily happen to us in the future. Thus, it takes an old fox to identify a trap.

The Dissident Right is a community where each person must determine their own level of involvement. Now is the time for each person to re-evaluate their finances, responsibilities, and goals. Unfortunately, we have now entered a period where the ruling elites have consolidated their power and are persecuting people for their political beliefs. This persecution has led to the censorship, deplatforming, harassment, and arrests of various nationalists and dissidents. If you feel like you need to lay low or adjust your level of involvement for a short period of time, now is the time to do it. There is no shame in changing tactics or strategy during these times of uncertainty. A clever fox knows when to cover his tracks with his tail.

Perhaps this is the reason why I connected with the fox that was crossing the street. Ever since these waves of censorship began a few years ago, I often wondered what I would do if it happened to me. What would I do if my bank account were shut down and I was blacklisted from getting a job? How would I pay for rent and food? I would probably end up like the fox, using my wits to find food and shelter. This fox did not look like he was starving or dying. Just like the fox, we do our best to survive, adapt, and carry on.

There are a few ideas and suggestions that might help dissidents who decide to stay active and involved in our community. Whenever you travel, you may want to erase your smartphone or travel with a spare cell phone that is devoid of any social media apps or contact information. You may also want to create a secondary bank account as an emergency account or to use solely for purchases and donations for our content creators. Moving over to alt-tech platforms is another way to support our community. Most importantly, the best thing you can do is to not get too black-pilled or depressed.

Those that hunt foxes often forget to protect the hen house. By branding 75 million Trump supporters as “domestic terrorists,” our enemies have lost all rationality and self-restraint. We now have an extremely large audience of disenfranchised Trump supporters looking for answers and explanations as to why their country has turned against them. We have those answers and explanations. We have been preparing for this moment for the last six years. From articles and books to music and cartoons, our community has created a lot of great content that will help those Trump supporters embrace our shared ideas, interests, and identity.

An old Dutch proverb explains that “old foxes need no tutors.” While I am no spring chicken, I am still learning new things every day. The tales of Reynard the Fox have taught me that a clever mind and a mischievous soul can change the world. The Dissident Right has also taught me how to survive, adapt, and carry on during these difficult times. And while I still prefer dogs and wolves, I hope to see the neighborhood trickster the next time I take the garbage out.

To find him, I need to be just as clever.