A. E. van Vogt’s Slan: An Analogy for Zionism? 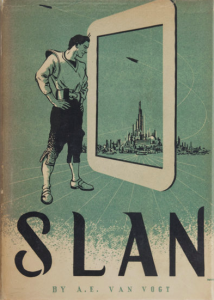 Science fiction writer A. E. van Vogt’s first novel-length work, Slan, became a classic, notable for being a pioneer in the mutant protagonist genre that gave us the X-Men comic book series and its cinematic spinoffs. In such literature, conflict with normal humans often comes to the fore, and this is no exception. A posthumous sequel, Slan Hunter, came out in 2007, completed from an unfinished draft.

Slan takes place far in the future, where a one-world government rules from the sprawling city of Centropolis. (At the time of writing, the United Nations was new, untarnished by the decades of corruption that would follow, and there was nearly as much buzz about globalism as there is now.) Kier Gray is the “absolute dictator of the entire planet” and an anti-slan fanatic. Just as fanatical is John Petty, chief of the secret police, and apparently the second most powerful figure in the world state.

There’s no explicit indication that the author was writing an analogy. Still, although they’re not particularly fashy, these two may well be stand-ins for Hitler and Himmler, at least in terms of the wartime propaganda that still hadn’t faded away. Naturally, this would make the slans vaguely Jewish. It turns out that the comparisons go a lot deeper.

Who are the slans?

The slans are a mutant race with superior strength and endurance as well as genius intelligence. However, the only visible difference is a short undercoat of hair, “thin strands like burnished gold,” which can be disguised with some effort. This grants them the ability to read minds, up to a limited distance. They can shield their thoughts from each other fairly effectively as needed. There’s an offshoot race, the tendrilless slans, who lack mind-reading ability but habitually keep their shields up. Then there’s at least one who doesn’t have tendrils, but is a “true slan” nonetheless (or so he says).

The government has been trying to exterminate the slans, offering a bounty for their capture. Humans hate them because of centuries-old stories about causing mutations in babies. (This may have a parallel in the ritual murder stories that surfaced during the Middle Ages.) Few slans remain, to the point that the protagonist searches for a long time but can’t locate any communities of his own kind. Resistance seems to be next to nothing.

As for the tendrilless slans, it turns out that they’re at war with the true slans, apparently following unprovoked aggression. They refer to them as “snakes” and are just as enthusiastic about exterminating slans as humans are, if not more so. They’re embedded into high levels of society, particularly the military. The protagonist figures out that they’re starting to take over the newspapers. (Does this remind you of anything?) However, the humans aren’t even aware that they exist. The tendrilless slans are highly paranoid and believe all true slans are treacherous. Although a powerful and unknown force in society, they fear the true slans might one day conquer them and wipe them out, which is a major reason they’re not making peace and all getting along. This hyper-vigilance to the point of extremely self-defeating behavior is yet another Zionist characteristic. There wasn’t any analogous crypto-Jewish population during the Third Reich playing the same role, but there was one during Renaissance-era Spain.

I’ll give the general rundown, trimming some side plots, and I’ll avoid spoiling the ending. The slan protagonist, Jommy Cross, is brought by his mother to Centropolis. (It seems somewhat like a rundown version of Chicago or New York, rather than Welthauptstadt Germania.) It’s not explained what they’re doing there, or why she would risk bringing her kid to what turns out to be a suicide mission.

They’re quickly spotted and split up. On the run, Jommy finds out that his mother has been killed, but he does not react to that. (At this point, I wondered what this kid’s problem could be. However, a few times later in the book, he does register a bit of normal moral outrage.) Pursued by citizens wanting to claim the prize on his head, he manages to escape.

In a weakened condition, Jommy is captured by a nasty old alcoholic who goes by Granny. She makes him shoplift and grift for her, even though he knows through his mind-reading abilities that she’d be happy to throw him under the bus. (I wondered why he didn’t just ditch her.) Jommy does his best to educate himself, no easy task in the dirt-poor outskirts of Centropolis. He meets a professor who explains some history:

I tell you a hundred thousand slans practically took over the world. It was a beautiful job of planning, carried out with the utmost boldness. What you have to realize is that men as a mass always play somebody else’s game — not their own. They’re caught in traps from which they cannot escape. They belong to groups; they’re members of organizations; they’re loyal to ideas, individuals, geographic areas. If you can get hold of the institutions they support — there’s the method.

Later Jommy successfully sneaks into the city and breaks into the catacombs, recovering technological secrets from his late father. On the run, he comes back to Granny, and he finds out that she dropped a dime on him. Still, he convinces her to escape with him back to Centropolis. They steal a spaceship from the tendrilless slans, but onboard, one of them ambushes the pair. While in hot pursuit by enemy air cruisers, Jommy tries to talk peace, but the tendrilless slan isn’t having any of it. However, the discussion is quite productive, since much background is revealed.

After peacefully resolving the hostage situation, Jommy and Granny go to the mountains. Jommy develops his father’s technology, including infinite energy sources and extremely durable metals. (Interestingly, these details soon would feature in Ayn Rand’s Atlas Shrugged.) He also invents hypnotism crystals, which can implant thoughts and thereby change behavior even across an entire community.

This brings to mind the Dominators of Zind, mutants with manipulative psychic powers from Norman Spinrad’s parody novel The Iron Dream. (The Dominators likewise easily can disguise themselves as humans, and perhaps not so surprisingly, they symbolize Jews much more explicitly.) Jommy only intends benevolent uses for the hypnotism crystals, though the ethics of thought control is unexplored, and likewise the “who watches the watchmen” problem. Surely all those blue-haired, face-pierced snowflakes working for the Tech Tyrants as social media censors believe that it’s benevolent to suppress freedom of speech. They probably think that enforcing narrative control makes them saints.

Further adventures follow, and Jommy finally meets a small slan community in the unlikeliest of places. Other revelations occur too. For one thing, it wasn’t the slans causing deformed babies, as they had been accused of doing for a long time. Mutations were on the rise, but it’s not explained why. (Everyone knew about radiation by 1946, so nuclear fallout would’ve been an easy answer.) Most mutations were harmful, but the slans just happened to luck out with helpful physiological changes. The first were triplets, a boy and two girls. They procreated with each other and began the new race. (On the count of three: eww!) That does have a parallel in the Ashkenazim, who started from an estimated founding population of 350, which causes a higher incidence of neurotic traits and some very tragic hereditary diseases.

Throughout the book, the reader is made to feel sympathy for the persecuted slans. Why can’t everyone just get along? Hadn’t this conflict dragged on enough centuries? Jommy doesn’t hate anyone; he only wants peace.

This does indeed have a real parallel. If Jews and white gentiles started getting along, the world would start making sense in a hurry. (Really, I don’t have a problem with the ones who don’t cause problems.) Although white gentiles have bent over backward for the last seventy-five years to please the Jews, peacemaking takes effort on both sides. For starters, they’ll need to realize that repeated bad behavior ruins the reputation of their people. Also, they’ll have to give up the self-defeating paranoia. Finally, the ones pushing anti-white narratives need to knock it off and figure out that they’re certainly not going to be accepted as “fellow black people,” or Hispanics, Arabs, and so forth.

Anyway, toward the end of the book, amidst the discussions of prognostications for the future, we have this from a very high-ranking slan:

Now, it is certain that human beings will sputter out, vanish from the Earth as a result of the sterility that has already started out on a vast scale, though it is not yet noticeable. Man will go into history along with the Java ape man, the Neanderthal beast man, and the Cro-Magnon primitive. Undoubtedly, the sterility which will cause this will be blamed on the slans, and when human beings discover it there will begin the second great wave of ferocity and terrorism. Nothing but the most powerful organization, expanded at top acceleration, under constant and dangerous pressure, could have been properly prepared.

Wrong attitude! Indeed, conspiring to send humans the way of the Neanderthals isn’t likely to win hearts and minds. Jommy has good intentions, but this other guy just ruined the chance of peace. In that case, it was rational for humans to resist them to the utmost. Slans like that just don’t get it, do they? Then this:

Your hypnotism crystals, of course, could be the final solution to the problem of human antagonism. As soon as there are enough slans with the know-how, that difficulty at least may be overcome.

So the high-ranking slan wants to control our minds so humans won’t notice we’re disappearing from the face of the earth. Awesome! It’s not explained how they’re trying to sterilize humans. If I were a supervillain plotting a depopulation agenda, maybe I’d hype a new respiratory bug into a plague and sell untested vaccines with lots of side effects which might include sterility. Hmm, I bet I could make a few bucks off of that idea too. . .

Slan’s early parts are rather slow, but it starts picking up later when the 4D chess stuff begins to emerge. It does have some artistic flaws and is a bit dated. Still, that aspect is rather entertaining, similar to much other “Golden Age of Science Fiction” literature, back in the day when any book with a rocket ship on it would sell like hotcakes. (Such quirky masterpieces offer much grist for my retro-futurist Space Vixen Trek parody series.) Orson Scott Card did a lot better with mind-reading mutants in the Worthing Saga, though maybe I’m biased because that one is vaguely Mormon-themed.

Even with its shortcomings, Slan is a fun read if you’re into that sort of thing, and also gives us something for those of us in the know to consider. A. E. van Vogt wrote quite a naughty book, probably unintentionally.