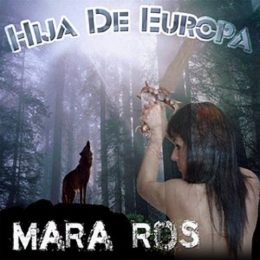 Mara Ros is a vocalist from Spain, someone whose heart is in the right place. She doesn’t have a public presence, which may well be sensible after their government has become increasingly globalist. I’ll assume that she’s a very private person, so I won’t speak of what little I do know about her. Political dissenters apparently can get into a lot of trouble lately now that Spain is no longer a fascist country.

A thriving Rightist music scene once flourished in Spain. The debut of Estirpe Imperial in the 1990s marked an uptick; I was hooked instantly after listening to the electrifying “Es Por Ti.” Many other bands became active the following decade. (Spain seems to have as many first-rate guitarists as New York City has psychiatrists.) However, the scene seems to have dried up lately. My favorite Spanish bands haven’t come out with anything new in recent years. Fansites stopped getting updated.

Perhaps the forces of tolerance and diversity have tightened the screws on freedom of expression. Even before, the political alignment of these bands was more discernible from their style than their lyrics. This suggests more reticence to express themselves than the earlier generation of Rock Against Communism bands. For example, Ian Stuart of Skrewdriver never was shy about his opinions. He had plenty to say about the corporate music industry (“Built Up, Knocked Down,” for example), but censorship by the state was less of a problem in those days.

There used to be scores of their videos on YouTube with inspiring graphics, often with themes showcasing Spain’s rich history from Tartessos up to the glorious Division 250. That ended when the soulless NPCs started scouring anything they could find that didn’t accord with their granola-overdosed Left Coast opinions. Thanks be unto the limp-noodled bugmen for protecting us all from thoughtcrime!

Mara Ros made her debut in the 2006 album Sin Cadenas by Axis Mundi, after a last-minute substitution for another singer. The band has a more diverse instrumental range and broader musical style than usual; most other groups in the scene specialize in Spanish heavy metal. Her role is mostly on backup vocals, making an interesting counterpoint, since the lead singer sounds a bit like a pirate. (Perhaps the Basque region is Spain’s equivalent of Cornwall?) She comes to the fore in “El Legado De Los U.S.A.” Mara Ros also starred on their Recuerdos album in 2009. She’s done at least one or two other collaborations, “Cuando el arcoiris venga” with Michael Müller, and maybe an album (Avalon with Hyperborea, if I recall correctly), but these are rarer yet.

She released a solo effort in 2008, Hija de Europa. It’s a rare find these days. As far as I can tell, it’s commercially unavailable, since the ENR-Tricolor website is inactive. She really shines in this one. Here, she came to the forefront as Spain’s version of Sweden’s talented musician Saga. I’m enough of a classical music nut to tell a good vocalist when I hear one, and Mara Ros has the right stuff. Although I’ll freely admit that I’m biased, I find something quite enchanting about the female singing voice. However, I’ll exempt Yoko Ono from this distinction.

Hija de Europa’s energetic first track, “A Piero,” is the sort of thing that can get the blood stirring in the morning. The lyrics are about someone who gets arrested for a picayune political charge. (His “crime” is that he says he’s fed up.) This leads to the usual sort of Kafka interrogation and a one-year pretrial detention. He’s sentenced to three years in the can, and the usual suspects take the opportunity to condemn him — the confederation, the bishop, the union, and the TV. He declares that the experience won’t break him, and his supporters are rallying to him. It’s possible that the events in “A Piero” may be real, likely about an Italian dissident caught up in guilt by association, after which the government made an example of him.

“No Olvido” follows, about a boy who is punished and then murdered because he wanted to say, “I don’t want to forget a past that was dignified and of which I feel honored.” Then some bastard journalist wrote a hit piece, twisting the facts. She wishes not for vengeance, but a future in which this doesn’t happen to our youths. Again, it may have been inspired by a real story, but I don’t have further details.

Martyrdom features in the third track, a tribute to Jan Palach. For some further background on that, after the Prague Spring in 1968, Soviet troops crushed the Czech rebellion. Comrade Brezhnev declared that the situation in brotherly Czechoslovakia was “normalized.” What that really meant was the iron heel of occupation. Jan Palach lit himself on fire to protest, and similar suicides were to follow. (Today’s young pinkos brainwashed by their professors should note that Communism was so wonderful that people were burning themselves to death in opposition to it.) La Compagnia dell’Anello, a band among Italy’s many Rightist Tolkien fans, also wrote a song honoring Jan Palach.

The grim theme carries on in “Desolación,” a number also performed by Céltica. There’s not much to be happy about the present situation — the degradation of cultural traditions, pollution filling rivers with poison, “warriors of the cause of decay, an emaciated reflection of their generation,” etc. (There’s a play on words in the original Spanish, and it almost reads “democratic reflection.”) The chorus makes two points. She shouldn’t be the one to give you advice to make you change or tell you how you should’ve acted. If your land dies, you die likewise.

“Estáis Ahí” is upbeat at last, a cover from Estripe Imperial’s excellent album from 1997, Himnos de Gloria. Ros’ clear voice, masterfully hitting the high notes, is a stirring inspiration. I can imagine Mara Ros holding a blazing torch to light the way forward. It begins, “You are there, struggling with us to change the course of this society.” It only gets better from there. The chorus means, “An idea, a struggle, a reason, a passion, always in our thoughts; we will continue fighting until you get to see that which we’ve always dreamed.”

Then there’s a tribute to Rudolf Hess, the Spanish version of a Landser original. It’s a touching ballad on the acoustic guitar. This is, of course, the guy who parachuted to Britain in an attempt to make a desperate peace negotiation. The British returned the favor by locking him up, I suppose for being an illegal alien. (If he’d arrived in blackface, would they have put him on the dole and given him housing?) After 46 years, he got Breitbarted in prison at the age of 93.

“Inconformista” returns to a heavier musical style. She begins musing on how things would be better if history had gone a different direction. She resolves to speak the truth, even if they lock her up for it. The time to stay silent is at an end.

“Retorno” is a beautiful melody, though tinged with sadness. It’s about a soldier who returns from the desert, having spent years fighting in a war that is unpopular on the home front. Upon arrival, he’s faced with bad reactions. It doesn’t specify which conflict this was, but it might have been the Algerian Revolution, a meat grinder ceded by sellout politicians in France.

“Boia Chi Molla” is a cover of an Italian song also performed by ZPM and Gli Amici Del Vento. The title itself is from a slogan back in Italy’s good old days, figuratively meaning “a deserter is a backstabber.” (Don’t be that guy!) It starts softly and builds up to a piercing crescendo. The lesson is that no matter how much we want to run away to a happier land far from the struggle, we must hold our ground.

The final number, “Hija de Europa,” is a cover from Sin Cadenas, which in the original was performed mostly by Axis Mundi’s “talk like a pirate” vocalist. The narration is from a jailed dissident addressing his lady. “Now I’m imprisoned, you no longer doubt, you understand me already, now you rebel likewise.” Perhaps those will be my thoughts too, if one day I end up in a reeducation camp courtesy of President-For-Life Kamala Harris.

From the subject matter in this 2008 album, it seems that the situation was getting pretty dicey already in that corner of the world. Although I’m an American of several generations, Europe’s struggles are my struggles too. We’re all in this together. The Eurocrats, globalists, and their toadies are hell-bent on wrecking our ancestral homeland, sucking the life out of it, and suppressing anyone who speaks up about what’s happening. I hardly can wait for the day when these parasites are kicked off of the gravy train and have to explain their actions.

Until then, it’s great to have the talented and charming Mara Ros on our side. I look forward to her next release, which hopefully will be possible sooner rather than later.