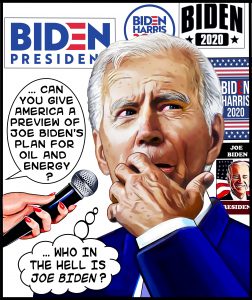 As the weirdest presidential campaign in history hobbles to a close during this odd post-American era during which America still pretends it’s a country, polls show that Americans agree more on the fact that there will be post-election violence than they can agree on the election’s winner.

A USA Today/Suffolk University poll finds that three out of four voters say they’re worried about violence at the polls and following the election. A Franklin Pierce University/Boston Herald poll again found “three-fourths of those surveyed bracing for blowback,” which startled me almost as much as my sudden discovery that there’s a “Franklin Pierce University.” Fifty-six percent of respondents to a YouGov poll said they foresaw “an increase in violence as a result of the election.”

To hear the think tanks and newspapers tell it, this unprecedented collective sense of queasiness that there will be blood — gallons of it — spilled over this election is not the fault of the think tanks and newspapers that are endlessly predicting violence as well as ceaselessly polling people about whether they, too suspect violence — nope, it’s Donald J. Trump with his whole Baby Hitler routine of suggesting that the election results might not be legitimate.

“President Trump has been fanning the flames of domestic discontent,” warns the Brookings Institution without bothering to cite even a single example of flame-fanning. “Stoking the anxiety is the president himself,” writes USA Today, almost as if it’s been Donald Trump and his ignorant legions of beer-bellied Republicans who’ve been torching buildings and looting nonstop since late May.

Mind you, I can’t recall Trump once ever encouraging people to “burn shit down” or “blow it all up” or “cover it in shit and blow it all up before burning it down” should he lose the election, but the establishment Left for the past four years have been trapped inside a Hall of Mirrors they built with their own hands. They’ve been shrieking at the sight of their own hideousness and pretending it was Trump all along.

These were the same tedious wriggling mealworms who, four years ago, screamed so loudly that their throats bled when Trump said he would consider challenging the election results if he lost — and they’re the same howling maggots who, the moment he won, started screaming about recounts and resistance and “not my president” and Russian collusion and impeachment. They haven’t stopped behaving that way for a second.

They’re the same gutless annelids who for years now have either outright called for violence against anyone who doesn’t think exactly like they do, or, even worse, they’ll simply deny that it’s violence, because any act committed in the name of justice is innately peaceful, no matter who gets permanently disfigured in the process.

They’re also the same countercultural-cum-establishment pawns who told us to “question authority” right up until the point that the FBI tried to assure us that all those loot-happy black rioters and destruction-crazed white Antifarts who tore the shit out of the country all summer were actually white supremacists.

Anchorage Daily News reprints a Washington Post article that ominously warns of Election Day violence but only seems to blame one side:

“The signals are disturbing: A sharp increase in gun sales. A spike in chatter about civil war in online forums where right-wing extremists gather. An embrace of violent language by President Donald Trump and other leaders.”

Where, oh where, is all this “embrace of violent language by President Donald Trump”? Where has he openly pandered to fear and racism? If I’d heard about this stuff earlier, I would have actually registered to vote this year.

Just close your lyin’ eyes and pretend that “White Rage” will be the spark that starts the post-election fires. At this point, I’m not even sure it’s legal to wish that were the case.

Nearly all of us except for the optimistically brain-damaged and the suicidally positive can agree that there will be violence. Although we may quibble on exactly how much violence there will be and how long it will last, the fact remains that when you add up the official public debt with unfunded liabilities included, this country is over $100 trillion in the hole. We are at each other’s throats in every possible way — racially, economically, ideologically, culturally, and geographically. The one-two punch of this “pandemic” thing along with the perma-riots has rendered everyone ready to snap like 330 million Travis Bickles squeezed into one rusty old Checker cab.

And the fact that most Americans seem more fixated on — and certain of — potential violence than they are about the election’s eventual winner tells us more than we wanted to know about how many Americans believe the country exists in any meaningful sense anymore.

Instead, we’re left with a deeply fractured and irreversibly retarded confederacy of malcontents who’ve been brainwashed since their whelping into believing that America’s life-or-death problem is “too much racism” rather than “too many races.”

Someone recently wrote a headline for NBC News that contained this line: “America’s gifted education programs have a race problem.” While sidestepping the topic of Jews and Asians so brilliantly that you might be tempted to suspect that the article’s author was indeed gifted, the essay laments how school programs for the gifted tilt disproportionately toward white children to the detriment, suffering, and endless psychological torture of blacks, beaners, and big fat smelly Eskimos. The task, it is proposed to us, is to fix this disparity. No, the simplest task would be to rewrite the headline: “Some races have a gifted-child problem.”

Speaking of Jews, a pair of young male Judaists who attempted to show “solidarity” with a feral mob of West Philly Welfare-Americans were told to get the HECK out of that riot because blacks are the real Jews, whereas these light-skinned so-called “Jews” were instead the “Synagogue of Satan.”

Wheezy Jewish folk singer Bob Dylan was born Robert Allen Zimmerman, but according to Wikipedia, his “Hebrew name” is Shabtai Zisel ben Avraham, which is so Jewish, he might as well call himself Jewy J. Jewstein. In recently published transcripts from a 1971 interview, Dylan reveals that he gave himself a more goyische surname so he’d be able to pass in a music industry that was still robustly anti-Semitic:

“I mean, it wouldn’t’ve worked if I’d changed the name to Bob Levy. Or Bob Neuwirth. Or Bob Doughnut. It wouldn’t have worked. There had to be that something about it to carry it to that extra dimension, but I didn’t know at the time what I was doing. . . . A lot of people are under the impression that Jews are just money lenders and merchants. . . . A lot of people think that all Jews are like that. Well they used to be ’cause that’s all that was open to them. That’s all they were allowed to do.”

He makes it sound like it was a bad thing! I’ll be the first to admit that they’re great money lenders and merchants — but they overplayed their hand when they allowed Bob Dylan to sing.

Although there’s a stereotype about our friends in the Jewish community being afflicted with deep-seated guilt problems, I can’t think of anyone in the MJE (Modern Jew Era) who bears a heavier invisible cross than the legions of guilt-addled white people who make a point of confronting their “whiteness” in front of the world with the hope that you’ll somehow think they’re heroic rather than annoying.

Writing for a newspaper in a county that is 97.8% white, a Charles Durning lookalike named Dr. Karen Elias relays her horror after accidentally apprehending her whiteness in a mirror:

“For a long while, I would cringe every time I came across the ‘Karen’ meme: Some white woman threatening to call the police on Black people going about their business. It isn’t fair, I would tell myself, to be placed automatically — because I’m a middle-class White woman who is also named Karen — in a box among folks performing ugly, racist acts. Like the ‘Central Park Karen,’ who called the cops on Black birdwatcher Christian Cooper. Like the ‘Chipotle Parking Lot Karen,’ who pulled a gun on a Black mother and her daughter because they were in her space. Both women, both white. Like me. . . . I am not being shot in the back as I reach into my pocket for my phone or a packet of Skittles.”

Will some nice black family please adopt this woman? We don’t want her.

Floating on anti-white wings up into the cosmic realm, an apple-faced Christian dork confesses that he’s “addicted to being white”:

“Hello, my name is Ben and I’m addicted to whiteness. . . . No one is born addicted, but I was nursed and raised by addicts who were reared by other addicts. . . . I was genetically predisposed to inherit this bloody heirloom; a generational disease that infects my DNA. As a child, I was immersed in whiteness; it was the water I grew up in and the tradition I was formed in. I was fed the lie of whiteness until I grew to enjoy the way it tasted. Later, as an adult, I consumed whiteness at such a rapid pace I became addicted without knowing. . . . What we call “white people” are simply human beings who were created good, who are now inflicted with a disease. . . . Whiteness is a psychological and social affliction that has invaded every aspect of society. I wish I knew how to abolish whiteness and eliminate this disease from my life and the earth. However, as far as I know we do not have a cure or vaccine. Also, it remains unclear if whiteness can be abolished.”

Whites survived the Ice Age and the Golden Horde and two World Wars. You can’t abolish whites, but we need to abolish the term “whiteness.” And if we ever get the upper hand again, we need to send people such as Ben and Karen to labor camps where all they do is knit white winterwear for thriving young white families.

« This Weekend’s Livestream: Kevin MacDonald & Gregory Hood on the Election