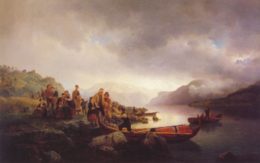 When I watched American History X as a teenager, I related to the film in numerous ways. Like Derek, I was tired of being shamed, guilted, and threatened for being white. I was tired of all the anti-white propaganda being pushed in my school and the media. I wanted to go to Norway where I could listen to heavy metal, celebrate Scandinavian history, and be around people that look like me. Now white Scandinavian children are becoming minorities in their own schools. Now white teens throughout Scandinavia are being attacked, raped, and murdered by African and Middle Eastern immigrants. Now, all white Scandinavians get bombarded by commercials that tell them that they have no culture.

» The Counter-Currents Newsletter, July 2020 What Are Trump’s Chances?