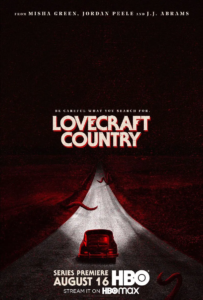 For the past several years, fans of H. P. Lovecraft have agonized over the question of how to reconcile their love for the Cthulhu mythos with Lovecraft’s views on race. Lovecraft Country, a TV adaptation of Matt Ruff’s novel of the same name, proposes a solution to this dilemma: to apply Lovecraft’s characterization of eldritch horror to white people. The show, whose producers include J. J. Abrams and Get Out director Jordan Peele, premiered on August 16th. As one would expect, it is awful, and critics are in love with it. Lovecraft Country currently has a 97% approval rating on Rotten Tomatoes.

The protagonist of the show is Atticus Freeman, an intelligent, well-read black man from Chicago who enjoys horror/science fiction and has just returned from fighting in the Korean War. After receiving a cryptic note from his missing father about family secrets and a certain “Ardham, Massachusetts” (obviously a stand-in for Arkham), he leaves home with his uncle George and a friend, Letitia, to search for him. The rest of the episode follows their journey.

Like Atticus, the other members of the Freeman family are intelligent and articulate. George is the editor of a Green Book-style travel guide for blacks and quotes Dracula on one occasion. His wife enjoys star-gazing; his daughter writes sci-fi comics. It is worth noting that Ruff, who is white, was educated at the highly selective Stuyvesant High School (whose student body is famously only about 1% black) and Cornell. He probably has not had much real-world experience with blacks.

The dominant theme of Lovecraft Country is the association between white people and all that is sinister and dark. Scenes involving white people are accompanied by ominous music and distorted sound effects. In case it wasn’t clear enough, a white man even transmogrifies into a monster at the end of the episode.

The trio’s first encounter with white people is at a diner. Sensing they are not welcome, they leave, whereupon they are pursued by white men with guns who are hell-bent on killing them. This would almost certainly not have happened in real life, particularly in the Midwest. Blacks who participated in sit-ins faced harassment and imprisonment, but (to my knowledge) none were murdered. It’s fitting that Letitia is played by Jussie Smollett’s sister. (I chuckled at her having to sing the line “Ain’t nobody fakin’” over and over when she sang “Whole Lotta Shakin’ Goin’ On” at the beginning of the episode.)

Their second encounter with white people is in the fictional Devon County, Massachusetts, which is situated in the Miskatonic region and is marked with an image of the Grim Reaper on Atticus’ map. It is a “sundown county,” meaning that all blacks must leave the county by sundown. A notoriously racist sheriff by the name of Eustace Hunt (who has a Southern accent, despite being from Massachusetts) confronts them and orders them to leave. They make it out in time but are stopped by policemen soon thereafter. They narrowly escape being shot at when the sound of shoggoths prompts both parties to flee to an abandoned cabin. Sheriff Hunt begins to turn into a shoggoth, having been bit by one (the shoggoths here have vampiric traits for some reason). The message — that racism is monstrous and unnatural — could not be more obvious.

The episode concludes with their arrival at a strange mansion, where they are greeted by a handsome blond man. He apparently belongs to a cult called the Sons of Adam; his girlfriend, also a gorgeous blond, is the daughter of the cult’s leader, Samuel Braithwaite. He is superficially friendly to Atticus and company, but since blond people are the ultimate villains, it is safe to assume that he is up to no good. (The actor’s natural hair is light brown, so his hair color is not a coincidence.) Indeed, in the book, Samuel and his followers attempt to stage a ritual involving the sacrifice of Atticus, who is descended from the mansion’s original owner (who raped a female slave).

The appearance of Alexandre Dumas’ The Count of Monte Cristo and a bar named after Denmark Vesey could indicate that the black characters will somehow exact revenge upon white people in future episodes.

The title of the second episode, “Whitey’s on the Moon,” is a reference to a spoken-word poem by Gil-Scott Heron wherein he complains that resources spent on the space program should have been funneled into dem programs. We can perhaps expect a sermon about how white sci-fi fans are racist for being interested in space travel.

As a show that ostensibly pays homage to Lovecraft, Lovecraft Country is a failure. It fails to capture the awe-inspiring terror and madness of Lovecraft’s creations, instead opting for cheap thrills and cheesy special effects. Being chased by rednecks driving a pick-up truck does not exactly inspire cosmic dread. The shoggoths aren’t particularly terrifying, either. The production values are impressive, but the show is devoid of substance. It has nothing to say beyond “f*** whitey.” Also, there is no trace of the distinct character of Lovecraft’s New England — the scenes set in Massachusetts might as well have taken place in Texas. There is nothing Lovecraftian about Lovecraft Country.

One reason why the attempt to flip the script and cast white people as the terror-inducing “Other” fails is that non-white races can far more plausibly be identified with chaos, darkness, senseless violence, and a lack of higher consciousness. White people, by contrast, value reason and order. The portrayal of Sheriff Hunt as a shoggoth is nonsensical because law enforcement officers are the antithesis of shoggoths. The enforcement of segregation is not remotely analogous to the invasion of dark, blob-like masses slowly creeping upon the face of the civilized world.

Lovecraft Country also falls flat stylistically. Like its soundtrack, which spans hip-hop, jazz, blues, and traditional film music, the show thus far is a muddled, overstuffed mix of genres that doesn’t gel into anything coherent.

The show does succeed in capturing how blacks see whites. The greater the genetic distance between two groups, the more they will perceive each other as strange and menacing. Decades of brainwashing and forced integration have proven unable to change this biological reality.

Conservatives who argue that blacks are “privileged” on account of affirmation action, welfare, etc. and are bewildered by blacks’ resentment are blind to the fact that blacks (and non-whites in general) are racial outsiders in the US and live in a society that was not built for them. (This is alluded to when Atticus picks up a copy of Lovecraft’s The Outsider and Others.) No amount of gibs can ease their alienation and temper their hostility toward the white majority. If anything, blacks today are more anti-white than they were during the Jim Crow era.

In short, Lovecraft Country — like HBO’s Watchmen, J. J. Abrams’ Star Wars films, et al — is yet another attempt, and a botched one at that, to co-opt and subvert a fandom traditionally dominated by white men.

Lovecraft and his cat are rolling in their graves.