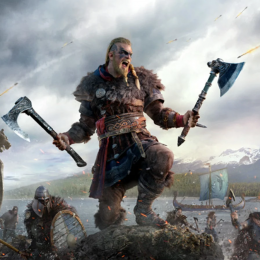 “ODIN IS WITH US!” shouts the blond beast protagonist in the trailer for the new video game, Assassin’s Creed: Valhalla. The trailer depicts the Vikings as the noble heroes, fighting against scoundrel Saxons who lie about their misdeeds. The teaser is narrated by an irate Alfred the Great who pillories the Nordic raiders for their bloodlust, godlessness, and cruelty.

The narration is contrasted with the scenes of the Vikings playing with their families, valiantly fighting in combat, and sparing the women and children while ransacking a village. The Vikings’ heathenry is on full display with a large Odin idol in their village and the protagonist seeing the Wanderer transform into a raven on the battlefield.

The trailer was widely mocked on right-wing Twitter. Some laughed at how the fantasy Vikings, who in real life profited immensely on slavery, respected foreign women and children. Pagans were annoyed at how the Northmen wore outfits straight out of a cheap Hollywood movie. Christian nationalists were upset that Ubisoft (the game’s maker) made Christians the villains and pagans the good guys. The Assassin’s Creed series has a long record of anti-Christian themes, such as one game where you kill the Pope.

Christians do have a point. There is a trend of positively contrasting Nordic paganism to Christianity in medieval-themed shows and movies. Sometimes the paganism is one that Counter-Currents readers would approve of; other times it resembles hippie festivals. Christianity is always painted as the same: authoritarian, zealous, puritan, and hypocritical.

It’s a strange development. On one hand, these media products glorify a faith indigenous to Europe. On the other hand, they attack Christianity for being the “faith of Europe.” Without Christianity, Europeans would be more tolerant, engage in free love, and just go with the flow, according to these portrayals. These tales resemble paeans to American Indians who stuck with their more natural religion against the evil White Man’s faith. The only difference is that the heroes in the Viking stories have fair skin, blond hair, and blue eyes.

Even though these movies and games intend to convey a vaguely liberal message, they aren’t much different from volkisch works of the nineteenth and 20th century. Several volkisch works depicted Christian missionaries as swarthy intruders oppressing the native traditions of Germany. Rome was the great enemy to many of these nationalist writers. This was the main theme of Wulf Sorenson’s The Voice of Our Ancestors. The beginning of Hermann Löns’s Der Wehrwolf laments how the protagonist’s village was converted to Christianity from paganism. Many German ethno-nationalists saw Widikund, the last pagan king of the Saxons, as a hero against the foreign depredations of the Christian Charlemagne. The Bloody Verdict of Verden, where Charlemagne ordered the execution of 4,500 pagan Saxons, became a pilgrimage site in the Third Reich.

This theme is carried on, likely unintentionally, by modern Viking depictions. It isn’t exactly new. The 1991 Icelandic film The White Viking is almost comically anti-Christian. The film centers on Olaf Tryggvason’s brutal conversion of Norway and Iceland to the one true faith. The Christians convert through intimidation, torture, and gruesome executions. Olaf’s bishop is a twisted freak who wants to kill the film’s main characters and take their wealth. Christian rituals are painted as oppressive and alien to the freedom-loving pagans, and Christians are superstitious slaves who at one point mistake the hero as the returned Christ. Paganism, in contrast, is shown as a benign fertility cult.

This film could have never been released in 1991 America — the Religious Right would’ve had a conniption over its blasphemy. It was fine for TV in secular Iceland.

Now you can see similar depictions in popular TV shows. The most popular example is the History Channel show Vikings. I share Jef Costello’s view of the show:

There is very clearly a strongly anti-Christian element in Vikings, and frankly, it’s offensive. Don’t get me wrong: I’m a pagan and strongly anti-Christian. But I am an intelligent anti-Christian. The perspective of the writers on this show is really not that of pagans (of course), but of liberals. Christians are depicted as befuddled, hypocritical, brutal, and, above all, sexually uptight. Now, all of that is true — but the liberal perspective is that this is all there is to Christianity. Thus, by contrast, the Vikings are depicted as wild, carefree, and sexually liberated. Yes, it’s really as dumb and ham-fisted as that. As my aforementioned heathen friend put it to me, they hate the Christians because they had standards, and love the pagans because they think they didn’t have any. In short, the Christians are hated for the one good thing about them.

The pagan Vikings imitate modern-day swingers in their habits and always require consent before indulging their desires. Paganism appears to have more power in the Vikings world than Christianity. While some characters experience stigmata and have visions of Jesus and demons, the Vikings faith does more. Their seers can see into the future, Odin walks among them and grants favors, and their ways always trump the dictates of Christianity.

But this isn’t quite the volkisch faith envisioned by German nationalists. It’s far more counter-culture than Kulturkampf. The show also depicts the Vikings as tolerant, multicultural, and supreme women respecters. In fact, nearly half of the Viking warriors are women! The Saxons are sexist and close-minded Christians. In fact, their Christianity makes them oppress women.

The show’s paganism is still largely a warrior cult that’s contrasted to the effeminacy of Christianity. That’s the one right-wing aspect of it. Overall, Vikings is too cheesy and stupid to be an enjoyable show. It’s a less entertaining, more nonsensical Sons of Anarchy set in the Dark Ages.

A much better Viking show is the Netflix series The Last Kingdom. This series is thankfully free of shieldmaiden legions and has much better characters, writing, and production values.

It also has a much less ridiculous treatment of the conflict between Christianity vs. Paganism. The main character, Uhtred of Bebbanburg, is a Saxon who was captured and raised by the Danes. He adopted paganism and resists attempts to convert back to Christianity. His resistance to conversion causes numerous problems with his main benefactor, the Saxon king Alfred the Great. Uhtred is torn between the two opposing worlds of Saxon vs. Dane, but he ultimately ends up fighting for the Christians against the pagan invaders in each conflict. Unlike in the Assassin’s Creed game and Vikings, the Norsemen are the villains — albeit respectable ones.

Despite fighting for the Saxons, Uhtred acts more like a Dane. This is particularly true with his firm commitment to paganism. His paganism is not a swinger cult, but a warrior’s faith. His religion demands he uphold his honor and seek justice against those who do wrong. Uhtred hates Christianity for telling him to turn the other cheek and humiliate himself before unworthy lords. Christianity is primarily a religion for women and crooked priests.

An illustrative example of the Christian vs. Pagan dynamic is when Uhtred confronts one of his servants in the first season. His first wife (he goes through many) earns him land in Wessex, but his chief farm servant is a corpulent thief who constantly lies to his lord. His wife, who is a committed Christian, urges Uhtred to forgive the servant and overlook his trespasses. After suffering another humiliation in court, Uhtred notices his servant has once again stolen from him. He kills the servant and shouts “THAT’S MY JUSTICE” to his horrified wife.

Viewers will naturally find Uhtred in the right and his wife in the wrong. This wife eventually becomes a nun.

In The Last Kingdom, paganism is a worldly religion that emphasizes honor, oaths, kinship, and a masculine sense of justice. Christianity insists on rules that have little to do with the world and force characters to betray kin and justice to satisfy their dogmas. Unlike in Vikings, Christians in The Last Kingdom are not condemned for having standards, but for having the wrong ones.

Paganism also has more real-world power in the show. Seers can tell the future and witches can heal the sick. Christianity shows itself to have no power over real-world events.

It is a bit odd that television and video game producers are so eager to extol the virtues of Nordic paganism versus Christianity. Haven’t they heard about the racist elements of modern Asatru? Isn’t it supposed to be wrong to fixate on honor and your own community to the detriment of universal values and other communities? Did Hollywood suddenly find the work of Stephen McNallen mesmerizing?

The simple answer is that most of these writers and producers are secular liberals who despise Christianity and will celebrate any religion that doesn’t hold Jesus Christ as its savior. They treat the Amerindian religion the same way, as well as Islam. The most intolerant, most illiberal religion in the world can always expect a positive depiction in movies and TV shows, especially if they’re fighting off crusaders. The Muslims are wise and tolerant, unlike the priggish Christians invading their land. These secular liberals would be horrified by sharia, but they realize they don’t live under it. They live under Christianity instead; Islam is just an exotic minority faith in their eyes.

It’s not so much that they admire the value of Nordic paganism — it’s that it serves as a useful vehicle to bash Christianity. They don’t mind the volkisch connotations. It’s something that can be overlooked. It may unintentionally make heathenry look cool to some impressionable young men, but the overall point is to stick it to the dominant Western religion.

It’s too early to say whether the Odinism in Assassin’s Creed will be based or cringe, though my guess is cringe. It at least appears the game will not have black and brown Vikings, which should deserve some praise. Left-wing academics would prefer a multiracial crew on the longship rather than an all-white one.

Our politically correct culture can’t get enough of the Northmen. Our culture makers may try their best to transform the Vikings into proto-liberals, but they will fail. The Vikings will always come across as archetypal blond beasts. That’s what makes them popular, and no imaginary bugman faith can hide that fact.

» Remember the Liberty Part One: Sheep