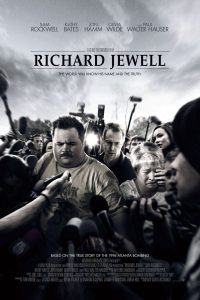 2019 was the year of the “frustrated-white-loser-living-at-home-with-his-mom” movie. First there was Todd Phillips’ Joker, an origin story of Batman’s most memorable nemesis, starring Joaquin Phoenix as the clown himself. Then came Clint Eastwood’s Richard Jewell, the true story of a Georgia security guard who discovered the Centennial Olympic Park bomb in 1996.

Jewell alerted the police, insisted they follow protocol when they were initially dismissive, and evacuated people from the area before the explosion, which killed two and injured more than 100. Jewell’s vigilance and conscientiousness saved many lives. He was hailed as a hero. Then he was framed as a suspect by the FBI and the media and hounded mercilessly. Why? Because he fit “the profile” of a mad bomber: a “frustrated white male” who lived at home with his mother.

Both Leftists and the Alt Right tried to meme Phoenix’s Joker into a symbol of white male rage and alienation. They did this long before the movie came out, based largely on hearsay, and many on the Right kept flogging this meme even after the movie belied it. For Phoenix’s Joker is not a charismatic criminal mastermind. He’s just a pathetic, vacant, mentally ill loser. Nobody would want to identify with him, not even pathetic, vacant, mentally ill losers.

Beyond that, there’s nothing especially insightful about Joker’s diagnosis of the modern malaise. Heartless rich people are cutting government programs, and Patrick Batemans are terrorizing people on the subway. It is true that during the Reagan years, thousands of mental patients ended up homeless, but most of Joker’s vision of dystopia is just unimaginative Bolshevik boilerplate. Nor does Joker offer any positive lessons for white men to overcome their alienation and rage. Joker isn’t the worst movie I aw in 2019—that prize goes to Star Wars: The Rise of Skywalker—but it is certainly the most disappointing.

Richard Jewell is one of the best movies of 2019, with a brilliant script, excellent performances, and an important message. It is infinitely superior to Joker because it shows the true cause of white male rage and alienation. Richard Jewell is not a nutcase dumped into the gutter by Reaganism. He’s simply an ordinary white man who fit “the profile.” No, not the FBI profile, the hostile elite profile. Richard Jewell is the kind of white man that the American system increasingly blames for everything that is wrong with our society—while depending upon these men to keep the society going. It’s a profile authored by people who regard white Americans as contemptible aliens. It is propagated through a thousand movies, TV shows, books, songs, and bits of journalism.

Richard Jewell is a fat, white, Christian, heterosexual, Georgia redneck with a heavy Southern accent. He likes guns and hunting, drives a pickup truck, believes in the American system, looks up to authority—especially men in uniforms—and wants a career in law enforcement, because he wants to protect people. He’s kind-hearted, observant, attentive to the needs of others, and obviously desires to be liked. These are pro-social virtues, but he’s also somewhat pathetic. Assholes and bullies regard him as an easy target. Yet he doesn’t seem to be especially bitter, although he has good cause to be.

I vividly remember the Richard Jewell case. When he was being hailed as a hero in the media, they were obviously pained by the fact that he looked like a redneck from central casting. And when they turned on him, it was with an obvious relief and relish, because he looked like the kind of guy they spend all their time sniggering at and vilifying anyway.

You know very well that if even one or two of Jewell’s traits had been altered—if he were thin, or female, or black, or gay, or a Yankee—the whole thing would have played out very differently. But Richard Jewell was everything the hostile elite loved to hate. And they almost lynched him for it.

In the opening scenes of the movie, Jewell (Paul Walter Hauser in his breakout role) is an office supply clerk in a law firm who strikes up an unlikely friendship with a young lawyer named Watson Bryant (Sam Rockwell). Bryant is presented as a cocky Chad. Jewell is presented as observant to the point of nosiness and obsequious to the point of cringe.

Viewers with modern Leftist prejudices immediately dislike both men. Bryant is “toxically masculine,” and Jewell has “low self-esteem.” But the film then brilliantly shows that Jewell’s sharp eyes and punctilious desire to please others are what allows him to save lives, and Bryant’s cockiness is what allows him to save Jewell.

Richard Jewell offers a scathing portrait of two of the hostile elite’s enforcement arms: the mainstream media and the FBI, personified by Atlanta Journal-Constitution reporter Kathy Scruggs (played by Olivia Wilde) and FBI agent Tom Shaw (a fictional character played by Jon Hamm). Both are arrogant, ambitious, manipulative, and dishonest—and the system rewards them for this behavior. They team up to frame Richard Jewell as a terrorist and ruin his life, because they are utterly indifferent to truth and see him as a perfect patsy, for he “fits the profile” of the system’s number one enemy. He personifies the America they want to destroy. They really are “enemies of the people,” and it really is them or us.

It was perfectly reasonable for the FBI to look into Jewell. The bomber, Eric Rudolph, really was a frustrated white male. People really do plant bombs for attention. They also fake hate crimes for attention and even make their own children sick. And Jewell’s record could be taken to show signs of this sort of malignant narcissism. He was fired as a sheriff’s deputy and a campus security officer for overstepping his authority, which could be taken for self-importance although it is probably just the same over-zealousness that made him a hero in the Olympic Park bombing, and once Jewell was in the media spotlight, he was humble and gracious, not self-aggrandizing.

But the FBI did not just look into Jewell. They tried to frame him. What’s more, they tried to use his patriotism, respect for authority, and desire to do good to destroy him. Eastwood is brilliant to hone in on this point again and again. It is a lesson that all white people need to learn.

This is not our country anymore. It is not our government. It is not our FBI. It is not our media. All of these are in the hands of our enemies. All the authoritative institutions of our society have been hollowed out, taken over, and repurposed to our dispossession and destruction. And one of the chief tools this system uses to destroy us is our own patriotism and naïve trust in the people who despise us. Richard Jewell repeatedly hammers home this moral obscenity.

This is one of the most important lessons we can teach, for when people cease to trust the media and the government—when they see them as a hostile elite, as enemies of the people—that is the beginning of populism. We have come a long way since 1996.

Many decent white people cringe when they look at Richard Jewell. Part of that reaction is healthy, because fat people are gross and unhealthy. Poor Richard Jewell died at the age of 44 from diabetes and heart disease. The stress of being framed as Public Enemy Number One surely did not help. I wish that Jewell had a longer, healthier life, and I hope that Paul Walter Hauser pulls a Chris Pratt body transformation.

But most of these negative reactions simply spring from anti-white hate internalized from the media, as well as the shameful American mania for exalting oneself by denigrating other whites. The truth is, we are all Richard Jewell. We are all targeted for destruction, and a smaller waistline and a better haircut won’t save you in the end.

What saved Richard Jewell? He knew his rights and asserted them. When he suspected that he was being framed, he called a lawyer with genuine character, Watson Bryant. Jewell slipped up a few times because of his trust in the government, his unassertiveness, and his desire to help. Bryant was there for support, but in the end, Richard Jewell was sufficiently smart, suspicious, and self-assertive to walk away a free man. He is an example to us all.

It would also be helpful if our people learn to see every reporter as a Kathy Scruggs and every cop as a Tom Shaw. There would be a lot fewer hit pieces and frameups.

Richard Jewell is a populist classic, which is why the enemies of the people have tried to bury it with silence or screeching. Every white person needs to see this superb film.

» Counter-Currents Radio Podcast No. 258
A Conversation with Laura Towler