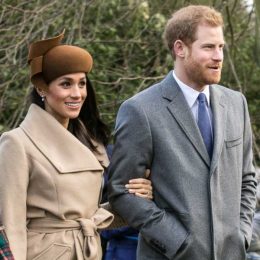 Nothing humiliates the British royal family more than an American divorcee.

King Edward VIII gave up his throne to marry the twice-divorced Wallis Simpson in 1936. Now Edward’s great-great nephew, Prince Harry, is resigning from the royal family to please his wife, Meghan Markle, a previously-divorced mulatto actress. Something must be amiss in the Windsors’ genetic line . . .

Prince Harry’s decision exemplifies the stupidity women inspire in men and the sordid state of monarchies. We expect royals to be better than mere mortals. But in our current age, they’re just simps to modernity. (Simp, for the older readers, is slang for “Suckas Idolizing Mediocre Pussy.”)

Harry and Meghan have enjoyed unprecedented media adoration since their engagement was announced in 2017. The press couldn’t get enough of the most eligible bachelor in the world settling for an older, mixed-race feminist (Markle was born in 1981, Harry in ’84.) Guardian columnist Afua Hirsch said the marriage would change Britain’s understanding of race forever and make it “impossible to argue that being black is somehow incompatible with being British.”

The marriage fulfilled the wish expressed by the Lady Gavron in 2000 that Prince Charles should’ve married a black woman to symbolize Britain’s new multicultural society. It may not be Charles, but his second son is close enough. Markle’s royal resignation was defended as a reasonable reaction to Britain’s inherent racism.

The media loved Markle because she indulged the narcissistic fantasies of affluent white female liberals (AWFLs). Here’s a feminist who doesn’t settle for less who nabbed a literal prince. As a royal, Markle dedicated herself to advocating for left-wing causes, such as MeToo and the gender pay gap. One of her chief causes was “decolonizing” the curriculum in British higher education and demanding the nation’s universities hire more non-whites and women. She even shouted “Oh my god!” when presented with the number of white male professors in the UK. As an 11-year-old, Markle fought against the terrors of sexist advertising. She carries on her mission as a royal, saying, “If things are wrong and there is a lack of justice and an inequality, someone needs to say something — and why can’t it be you?”

Most royals focus on apolitical causes—Markle decided this restriction was beneath her.

Like the stereotypical AWFL, she plans to raise her son in “a gender-neutral way.”

Her wedding also tried to diversify royal tradition. She chose Episcopalian minister Michael Curry—a black American who devotes most of his time to Black Lives Matter and LGBT causes—to deliver the wedding sermon. Curry offered a typical black minister performance that seemed to unnerve the royal family. A highlight was him declaring “dat’s FIAH.”

Additionally, a black gospel choir replaced the traditional choir at the wedding.

Markle walked alone down the aisle because she didn’t want her father to attend the wedding. She also made sure that the vows were feminist-friendly.

Since joining the royal family, Markle has tried her best to cause drama within the family. Her behavior caused a rift between Harry and his brother, Prince William. The beloved couple didn’t attend the royal family’s Christmas to avoid Harry’s relatives.

AWFLs have loved this brown-skinned feminist shaking up things in Buckingham Palace. It’s just like their favorite romantic comedies, complete with a stuck-up family not ready to accept the new world. Prince William and Kate Middleton—paragons of what royals should aspire to—make for the perfect villains. They’re just too white and stale. Markle is a diva who won’t take shit from anybody—not even a Queen!

“A half-black, American divorcee from a humble background is not supposed to tell the Queen of England she believes she can create a better life for herself and her son, without her, her family, or their pomp and circumstance,” Daily Beast columnist Keli Goff writes. “And yet that’s just what Markle did.”

And thankfully, she has her obedient man to follow behind her every step of the way. Behind every strong woman is a weak man serving her every need. Harry’s behavior is atrocious and shamefully beta. At a recent event, Harry approached Disney executive Bob Iger and pathetically begged the billionaire to give his wife a film role, any role, even a voice acting gig. This is a strapping young royal bending the knee before a Jewish media mogul. Twenty-first century power dynamics could not find a better representation.

They are trying to take down this video of Prince Harry asking the CEO of Disney to give Meghan a job! Be a shame if this went viral. Pls do not RT pic.twitter.com/SKlCImSN83

Markle’s new fantasy is milking her husband’s family brand for profit. The couple is seeking a global trademark for “Sussex Royal,” which will allow them to slap their royal affiliation on a host of cheap products. So noble, so virtuous, so empowering, so independent. Markle’s strong independent woman facade would be impossible without her husband’s name and simping.

Prince Harry’s humiliation testifies to the destructive power of pussy. Men with the world before them will give it all away just for coochie. Harry could literally have any woman he wants; he chose Meghan Markle. Harry should’ve never dated her, and he should’ve never married her when he learned of how much her own family despises her. Otherwise smart, reasonable men will make the most braindead decisions when it comes to women. They’ll allow women to control them and ruin their lives. They’ll alienate friends, family, and dreams all on behalf of a conniving femoid. Game blogs are not without vices, but they at least offer men better advice than simping. Harry could’ve saved himself from disaster with just a few hours of reading Heartiste.

Harry’s behavior calls into question the superiority of monarchy. Many within the Dissident Right long for royal rule. They admire the accomplishments of the Habsburgs and Stuarts. They say they’re better than the mob rule we suffer today. They will dismiss the personal flaws of modern monarchs as the fruits of heresy, usurpation or some other sin.

The Windsors certainly have their flawed representatives. Harry’s uncle, Prince Andrew, is a scumbag who was best friends with Jeffrey Epstein and had sex with underage girls. Harry’s father, Prince Charles, may not have married a black woman, but he wants to embrace Britain’s multiculturalism by becoming the Defender of Faiths; Defender of the Faith is no longer good enough. Prince Charles’ uncle and mentor, Lord Mountbatten, was likely a pedophile. There is also the aforementioned King Edward VIII who abdicated his throne for coochie, altering world history for the most pathetic of reasons.

Some reactionary contrarians like to insist the Stuarts would never sink to such depths, but that’s a questionable point. The Habsburgs, another reactionary favorite, was filled with sexual deviants and idiots. Franz Josef’s only son, Crown Prince Rudolf, murdered his lover and blew his brains out in what may have been a suicide pact. This disgraceful episode was in line with the rest of Rudolf’s sordid short life. Wilhelm Habsburg, a would-be king of Ukraine, was a promiscuous bisexual who sold out his countrymen and friends with relish.

Many current monarchs support the dispossession of their own countrymen through immigration. Prince Charles said mass immigration skepticism is similar to the “dark days of the 1930s.” King Carl XVI Gustav of Sweden constantly tells Swedish leaders to do more to help migrants. King Harald V of Norway delivered a passionate speech in 2016 outlining his support for mass immigration, diversity, and LGBT causes.

Some identitarians imagine monarchs as divine saviors, but they’re really just globalist elites in swankier outfits. A restored Bourbon/Habsburg/Stuart House would act the same as the Windsors—possibly even worse—in our age. Rather than resisting modernity, monarchs submit to it.

Our hope for salvation lies with the people, not with princes who sell their birthright for a crumb of coochie.