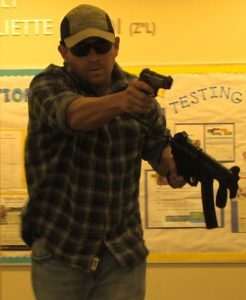 The recent spate of White Nationalist mass-shootings has been seized upon by the progressive media, who are hard at work recycling every one into grist to the mill of increased surveillance and repression of white men. I imagine they must feel a sense of vindication, even of accomplishment, under the protestations of outraged universal love. What was first invented as a humble slander long before the majority of the killings, namely the fake news that White Nationalist terrorism is a greater threat than that of Leftists and their foreign allies, is now fast growing into a fact before our very eyes. And we would surely be fooled by the trick, had we not seen it play out before in the case of the “neo-Nazi Alt Right,” which ended up living down to every media smear directed at it.

Before a young white man can throw his life away, along with those of others, to produce an act of White Nationalist terrorism for the media gristmill, a number of hurdles in his mind must be cleared. First of all, he must be “radicalized,” i.e. basically aware that white men are under attack in the West, and enraged enough to resolve upon political violence. Then, he must carry out his intent in such a way as to confirm the progressive narrative on “racism” – which above all means fixing his anger not on the mostly white people in power, but on random innocents in minority groups collectively allied with those in power. And finally, something must override the obvious objection that his actions will only make things worse, by furnishing more reasons for the war on white men. These hurdles, plus death or life imprisonment, would be enough to deter almost anyone, so we can assume that a sophisticated terrorist ideology is needed to clear them all.

If we would understand that ideology, we may consult the manifestos written by the killers Dylann Roof, Brenton Tarrant, John Earnest, and Patrick Crusius (linking to them here would risk endangering this site or certain categories of its readers, but all of them are easy enough to find). They provide sufficient proof that the authors were basically sane and lucid; that they were not stereotypically irrational, hate-filled “racists” (Roof grew up among blacks without animosity, Tarrant speaks highly of Third World people, Crusius shows no personal hatred towards Hispanics); and that most of them were not so far steeped in Rightist tropes as to be incapable of nuanced thought. Without exception, they were primarily motivated by recent political developments – among them the Trayvon Hoax, the race-replacement policies and tolerance of Islamic terrorism in European countries, and the prospect of a Democrat Party takeover of the US through their vote-importing racket. (Earnest’s manifesto appears exceptional at first glance, as he makes a show of atavistic anti-Semitism, but it is clear that he is simply blaming “the Jews” for the latest madnesses of the West’s ongoing cultural revolution.)

These killings, then, confirm the longstanding predictions – and not-so-secret hopes – of intellectual White Nationalists. Just as they expected, the constant vomit stream of anti-white hate from progressives and their non-white allies has produced a siege mentality in many white men. In place of the double standard of racial tolerance, they want to adopt a single standard based on that which applies to the non-white groups in the progressive coalition, meaning of course a demagogic, nationalistic, and selectively pro-violent standard. Where the White Nationalists err is in assuming that this white reaction is (1) an “unintended consequence” of progressive ideology, and (2) a fatal flaw in that ideology, like Marx’s supposed “immiseration of the proletariat” in capitalism, which will produce an inevitable and automatic balancing reaction after a certain point.

I find this hardly less naïve than hoary old conservative talk about “misguided liberal good intentions,” producing “unintended consequences” that will be corrected as soon as they are recognized. If most sensible White Nationalists believe, as I think they do, that terrorist acts by whites only energize the Left and justify more repression, would it not make more sense to assume that the white reaction against non-whites is built into progressivism in some way?

Granted, progressives certainly don’t think of themselves as goading ordinary whites into racial violence. And there are some truly unintended consequences to their cultural revolution, such as the capture of the White House by Donald Trump, which led quite a few journos to question the wisdom of the anti-white hate carnival in the depths of their shock. But in retrospect, the wild card was the appearance of a renegade billionaire offering patronage to ordinary whites, not the public discontent itself, which progressives had been happily stoking for decades. The disappearance of the political solution offered by Trump and the repression of his peaceful supporters has had a definite stimulating effect on White Nationalist terrorism, as can be seen in the manifestos (Tarrant’s and Earnest’s) that directly mention Trump’s failure to carry out his promises, but I have not noticed any soul-searching by progressive commissars over this fact.

The sneaking suspicion becomes more plausible when we ask why the shooters attacked innocent non-whites and Jews instead of targeting journalists, bureaucrats, or politicians, which would not have been an advisable course of action by any means – in contrast to Leftism, no form of terrorism is good for the Rightist cause – but at least would have struck at those responsible for anti-white policies. The easy answer is that, although some of the manifestos display a vague awareness of higher powers (“elites,” “corporations,” etc.) inciting and profiting from racial conflict, the focus is almost entirely on the lower-order racial minorities patronized by those in power. Tarrant, for example, repeats a common cart-before-horse fallacy when he frames the cultural revolution in Europe as a “Muslim invasion,” in which progressive elites act as secondary “race traitors” – as if it were the “traitors” who went begging to the “invaders” in rags, not the other way around.

White Nationalists would say that this focus is the natural product of “racial consciousness.” But it is also the outcome of a vast propaganda effort that obscures as far as possible the very existence of an entrenched power center in the West, and leads us to believe that Western elites are turning against lower-class whites in order to accommodate the irresistible rise of non-whites, when in fact they are importing and empowering those non-whites precisely in order to crush lower-class whites. This is partly accomplished by raising up high-profile, viciously anti-white minority figures – the Ta-Nehisi Coatses and Alexandria Ocasio-Cortezes – and painting them as avatars of non-white groups according to the mystical dogmas of “representation,” although they are usually just compliant creatures of the progressive patronage machine. By drawing attention to this, I don’t want to play into conservative delusions about doe-eyed noble savages longing to “get off the plantation”; most non-whites are probably quite happy with their considerable privileges over whites. But things are clearly set up in such a way as to direct maximum white anger onto these groups, reminding them of their dependence on government protection, and maintaining a progressive-minority high-low alliance that often threatens to crack.

This leaves only the last hurdle, the fact that White Nationalist terrorism obviously hurts the dissident cause and helps the cultural revolution. Let’s see what Tarrant had to say about it in his manifesto:

I expect not only to be released [from prison], but I also expect an eventual Nobel Peace Prize[, a]s was awarded to the terrorist Nelson Mandela when his own people achieved victory and took power.

Tinged with sarcasm as this may be, none of these rampages by sane young men make any sense except in the context of their belief in the official myth of the cultural revolution, that it is a succession of genuinely spontaneous popular uprisings that can be imitated by Rightist forces. And since popular uprising is a script written by the Left, and executed by “virtuous terrorists” like Mandela, sensible White Nationalists can never hope to purge terrorist violence from the minds of their supporters. The mechanisms of patronage that allow Leftist violence to be valorized (while Rightist attempts to imitate or even fight back against it are excoriated) are not mentioned in the manifestos, which are full of swinging pendulums, atmospheres of change, separations, agitations, and other riddles of democratic alchemy.

The sophisticated terrorist ideology driving White Nationalist terrorism turns out to be progressivism, and in a wider sense its parent ideology of liberalism, without which no one with any sanity would be motivated to try it. Of course, its messages to white men to acquiesce in their own destruction cannot be sent directly, but must be reflected off White Nationalism, a.k.a The Stuckment; but that political entity has shown a wondrous capacity to take every lump of shit thrown at whites and repackage it as ideological sustenance. The “lone wolf strategy” under discussion here is a prime example of this process: It is the connecting line obligingly drawn by The Stuckment between (a) the repression of all possibilities of self-interested political organization for white men, and (b) the fact that progressives still need to paint the resulting sporadic, useless outbursts of white political anger as existing under the umbrella of some larger organized threat.

Perhaps we should take a dispassionate moment to marvel at the ingenuity of it all, but I can’t help but think that these feats of manipulation would become ineffective if people on the Right actually stopped believing in liberalism. Giving them the means to do so is a job that the Dissident Right, having failed the first time, must get right the second time. Admittedly, achieving mental freedom from the official ideology is not going to satisfy the desire of many white men to do something now – but at least it will prevent them from sacrificing their lives and those of others in order to maintain the volunteer commissariats and racial alliances of their tormentors.